Lanterns in the Woods 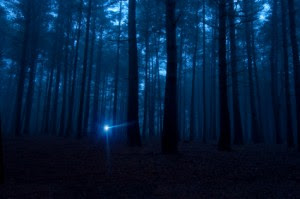 When I was a kid, we had a summer home on a quiet inlet of the Chesapeake in Southern Virginia. The old Victorian house sat facing a lonely forgotten cemetery.

Sometimes, on special occasions and for no reason I could discern, blue ball lights would dance around, one and sometimes two of them. They silently drifted up and down among the headstones. They were like this light in the photo above, except had no radiation of light around them, no flare. It fascinated me. And, my entire life, I keep running into stories of "lanterns in the woods."
Explanations for lantern-like lights in the woods have been attributed to Native Americans ancestors, Earth Lights, lanterns held by ghosts, and strangely enough they are often seen in the woods where Bigfoot is hiding. They are referred to often as will-o'-the-wisps or spooklights.

(Wikipedia) A peasant traveling home at dusk sees a bright light traveling along ahead of him. Looking closer, he sees that the light is a lantern held by a "dusky little figure", which he follows for several miles.

All of a sudden he finds himself standing on the edge of a vast chasm with a roaring torrent of water rushing below him. At that precise moment the lantern-carrier leaps across the gap, lifts the light high over its head, lets out a malicious laugh and blows out the light, leaving the poor peasant a long way from home, standing in pitch darkness at the edge of a precipice.

This is a fairly common cautionary tale concerning the phenomenon; however, the ignis fatuus was not always considered dangerous.

There are some tales told about the will-o'-the-wisp being guardians of treasure, much like the Irish leprechaun leading those brave enough to follow them to sure riches.

Pauling Light of Michigan is another popularly known local light that has had many explanations. (Wikipedia) The first recorded sighting of the Paulding Light came in 1966 when a group of teenagers reported the light to a local sheriff. Since then, a number of other individuals have reported seeing the mysterious light that is said to appear nearly every night at the site.Although stories of the light vary, the most popular legend involves the death of a railroad brakeman.The legend states that the valley once contained railroad tracks and the light is the lantern of the brakeman who was killed while attempting to stop an oncoming train from colliding with railway cars stopped on the tracks. Another story claims the light is the ghost of a slain mail courier, while another says that it is the ghost of an Indian dancing on the power lines that run through the valley.

Repeatedly, those seeking Bigfoot have also run into something unexpected in the woods, flashlight or lantern-like lights. One researcher reported that he and his team of 5 were in the woods to a remote location they hiked six hours to reach. They had been there before and had interactions. They expected it would be ideal because there was no way to reach the location but on foot or horseback. They set up up a parameter and a camp. They took the woods at night. One team had a FLIR thermal imager, another group he was in carried audio devices. They hoped to get some vocalizations. They started seeing a light in the distance and they went towards it. It appeared to split into two lights that hovered and bobbed slightly. They reported the lights looked just like if someone were carrying a lantern and walking a path, but there was no one else there. The lights went out before they reached them, but later in the night, the lights showed up in other parts of the woods, sometimes one light, other times two, with the same quality. It left them baffled. Upon talking to other researchers, they found out these lights were commonly reported in Bigfoot areas. What they are is still a great mystery. It could be an incidental finding, that Bigfoot happens to be in parts of the woods where Earth lights occur, or it could in some way be associated with their presence, although just how or why they make lights is attributed most often to the theories of interdimensional travel or plasma creation.

Hornet Spooklight in the Devil's Promenade area between Missouri and Oklahoma. (Wikipedia) The Spooklight is commonly described as a single ball of light or a tight grouping of lights that is said to appear in the area regularly, usually at night. Although the description of the light is similar to that of other visual phenomena witnessed throughout the world, the term "Spooklight" when standing alone generally refers to this specific case. Numerous legends exist that attempt to describe the origin of the Spooklight, one of which involves the ghosts of two young Native American lovers looking for each other.

Marfa These lights in Marfa, Texas as so popular that there is a viewing area where people congregate nightly to watch them.

Brown Mountain in North Carolina has lights that are perhaps the most studied in search for some reason in nature for these woodland "lanterns."


Lanterns in the woods have been reported for many centuries and will continue to be seen. Whether lights such as Brown Mountain and Marfa lights are explained any time soon has yet to be seen, but the majority do believe them to be unusual lights that occur in nature under the right conditions, but should you ask a lonely hiker on a country highway or a person camping in the woods, they continue to unsettle those who get to witness them.