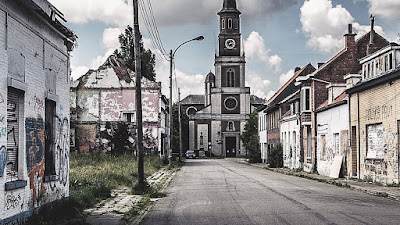 Movies based in abandoned towns, ghost towns, abandoned houses - they are a great late-night watch. Here's an extensive list -


Disappearance:  A family stops at a Nevada ghost town and are terrorized.


Abandoned towns - a delicious subject for curiosity and fear. There were lots of movies based on abandoned towns and scenarios, as well as actual towns in real life - I'm sharing some of the best -

Chernobyl Diaries: Six tourists hire an extreme tour guide who takes them to the abandoned city Pripyat, the former home to the workers of the Chernobyl nuclear reactor. During their exploration, they soon discover they are not alone.
I Am Legend:  Years after a plague kills most of humanity and transforms the rest into monsters, the sole survivor in New York City struggles valiantly to find a cure.
The Last Man On Earth:  When a disease turns all of humanity into the living dead, the last man on earth becomes a reluctant vampire hunter.
The Omega Man:  Army doctor Robert Neville struggles to create a cure for the plague that wiped out most of the human race.
Children of Men:  In 2027, in a chaotic world in which women have become somehow infertile, a former activist agrees to help transport a miraculously pregnant woman to a sanctuary at sea.
Book of Eli:  A post-apocalyptic tale, in which a lone man fights his way across America in order to protect a sacred book that holds the secrets to saving humankind.
Stake Land:  Martin was a normal teenage boy before the country collapsed in an empty pit of economic and political disaster. A vampire epidemic has swept across what is left of the nation's abandoned towns and cities, and it's up to Mister, a death dealing, rogue vampire hunter, to get Martin safely north to Canada, the continent's New Eden.
The Road:   A post-apocalyptic tale of a man and his son trying to survive by any means possible.
28 Days Later:   Four weeks after a mysterious, incurable virus spreads throughout the UK, a handful of survivors try to find sanctuary.
Zombieland:  A shy student trying to reach his family in Ohio, and a gun-toting tough guy trying to find the Last Twinkie and a pair of sisters trying to get to an amusement park join forces to travel across a zombie-filled America.

House of Wax:  A group of unwitting teens are stranded near a strange wax museum and soon must fight to survive and keep from becoming the next exhibit.
Purgatory:   An outlaw band rides into a town that is actually Purgatory, between Heaven and Hell.
Silent Hill:  A woman goes in search for her daughter, within the confines of a strange, desolate town called Silent Hill. Based on the video game.
Raw Meat:  There's something pretty grisly going on under London in the Tube tunnels between Holborn and Russell Square. When a top civil servant becomes the latest to disappear down there Scotland Yard start to take the matter seriously. Helping them are a young couple who get nearer to the horrors underground than they would wish.


The Abandoned:  An adopted woman returns to her home country and the family home that she never knew and must face the mystery that lies there.
Legend of Hell House:  A team consisting of a physicist, his wife, a young female psychic and the only survivor of the previous visit are sent to the notorious Hell House to prove/disprove survival after death. Previous visitors have either been killed or gone mad, and it is up to the team to survive a full week in isolation, and solve the mystery of the Hell House.
The Blair Witch Project:  Three film students vanish after traveling into a Maryland forest to film a documentary on the local Blair Witch legend, leaving only their footage behind.
Death Tunnel:  For an initiation stunt, five college women are locked in a Kentucky hospital built in 1910 where 63,000 people died from a disease known as the "white plague". Deep under the hospital is the "Death Tunnel" which once were used to secretly remove the dead from the grounds.
The Shuttered Room:  A series of horrific murders is traced to a creature that inhabits a very strange house.
Session 9:   Tensions rise within an asbestos cleaning crew as they work in an abandoned mental hospital with a horrific past that seems to be coming back.
The Task:   A group of unlucky reality show contestants must survive the night in a haunted jail.

Urban Explorers: Into the Darkness


How about a tour of a real abandoned town?


Here's an abandoned town for 30 years coming back to life -


I really really really want this (below) to be a TV SHOW! It would be my favorite. I want to know how they choose places, how they approach them, safety tips, photography tips, history, hauntings and more.