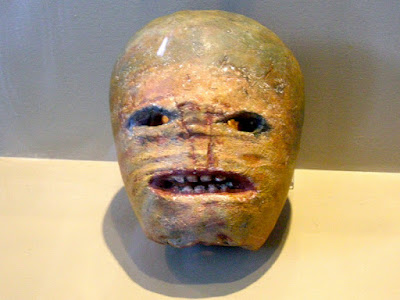 In America, we carve pumpkins, a crop that is native and proud in our country, but in the UK, they used to carve turnips and some still do. This is just one of many interesting trivia and traditions about Halloween that I plan to share in this post.

Candy corn:  More than 35 million pounds of candy corn is produced each year according to the National Confectioner’s Association. Created in the late 1800s, the three colors are supposed to look like the colors in kernels of corn. A popular staple at Halloween, candy corn is actually available throughout the year with some companies making other versions of the candy for different holidays.

Japan: At the end of every October for the past 21 years, nearly 4000 costumed Halloween enthusiasts from all around the world have gathered in Kawasaki, just outside Tokyo, for the Kawasaki Halloween Parade, which is the biggest parade of its kind in Japan. However, not everyone can simply join in the festivities. The Kawasaki Halloween Parade has strict guidelines and standards, so you have to apply for entry two months before the parade begins.

Bobbing for apples: After all, apples make numerous appearances in Celtic mythology and are often connected to the Otherworld.

The reason? Well, the practice used to be considered a form of divination performed around Halloween, according to NPR. That's right — people would dunk their heads in a vat of water and try to bite into floating fruit in a quest to figure out their future spouse.

Ladies would mark an apple and toss it into the tub. The thinking was they'd be destined to whoever pulled it out of the water.

Irish:  Halloween’s origins come from a Celtic festival for the dead called “Samhain.” Celts believed the ghosts of the dead roamed Earth on this holiday, so people would dress in costumes and leave “treats” out on their front doors to appease the roaming spirits. Granted, the Celts were not solely based in Ireland when these customs started taking shape around the first century B.C., but as will be talked about more in a later section, the Irish Celts were the ones who invented the jack-o’-lantern. This Halloween prototype was eventually disrupted and adapted by Christian missionaries into celebrations closer to what we celebrate today, including partly by the not-Irish St. Patrick, whose work was later mostly recognized by Americans.