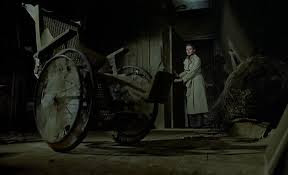 There are some great ghost scenes in movies, but still not as many as I'd like to see. Here are five of what I consider to be the most chilling moments -


The runner-up scene: When John Russell throws his daughter's red ball off the bridge over the river and goes home and as he walks in, the wet red ball bounces down the stairway.


The runner-up scene: When they open the kids' bedroom door and the toys and everything are floating around.

The daughter is talking to a "make believe" kid named "Jody," but then the mom encounters it -

The runner-up scene is when the psychic friend lets them know that the basement is the gateway to hell.

The runner-up scene: When the mom is dusting and notices the photos on the wall showing her son with some kind of weird light in each pic.

The runner-up scene:  When Eleanor awakens to someone holding her hand, but no one is there.