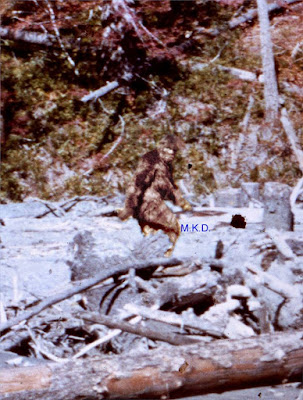 This is a guest posting by MK Davis, respected researcher of Bigfoot and ancient studies, as well as video/photographic expert.

It's not often that I feel the need to speak out against something that should, if employed properly, work for the public good. This would be skepticism.

In its bridled form, its intent is to create a filter for the countless claims of the fantastical. Saving the individual and the public at large from being hoodwinked or worse defrauded. That being said, then that filter has evolved...no, it has MORPHED into something quite different than it was reasonably intended.

An industry has been built around what can only be termed "hyperskepticism." While there is a need for looking at some things with askance, the freedom to make up one's own mind has been eroded by the hyperskeptic who likes to do everyone's thinking for them. Their use of belittlement for those who chose to believe something in spite of their condemnations is a good sign that they have gone way too far in their assessments. Ask anyone of the professional skeptics and they will tell you that their service is for the public good.

Such is happening, I'm afraid with the world of skepticism and I fear that they have become an impediment to free thought through their aggressive stance. They have created a "NO" generation. They are bobble head dolls whose heads only move back and forth.

My own forte' has been my work on the Patterson Bigfoot film. I have seen my share of Skepticism over the years. I have been more than patient with such thinking that I would accept whatever the film itself told me at the time when the film could be improved to that point.

After years of acquiring the best images and after removing lensing defects and hand stabilizing the film, the film more than reaches that goal. What does hyperskepticism do against the film in its best form?
They go after the film maker.

I can show this tremendously improved film that has on display all the biomechanics of life on it and they go up against it with Roger Patterson's bad credit or the fact that he was sick with cancer and looking for a quick buck. This has got to stop. Such archskepticism does not deserve equal time with this much improved film of a historical event. Roger Patterson's credit score is meaningless against a film this good and underscore's the current condition of this "filter" that is supposed to spare us from the fantasical.

The archskeptic likes to equate such unreasonableness with "critical thinking." Such hyperskepticism is far from anything resembling critiquing. They have created an industry based upon mistrust and the natural fear of being taken in.

I strongly suggest to those who have the reigns of the Patterson film, not to give such ones any time against it. They don't have any way of disputing it other than tearing down the men who took it. The film is way too good for that and those men deserve better than that. As far as being afraid that you might be taken in...it's ok to be wrong about something but it's much worse when you "fail to be right" about something. That is the overriding effect of hyperskepticism is that it creates a fear in people that they will be wrong. In so doing...people just won't speak out and that is a "failure to be right."

Pitting the Patterson film against a hyperskeptic is "worn out" television. Show the film in its best form for they whole show. Show the archskeptic the back door. People can make up their own minds based on what they see in the film. They will get it right.

I thank MK Davis profusely for bringing this subject up and expressing it so eloquently.

I would add to this that there are skeptics and there are no-sayers.

Skeptics can look at evidence openly and say why it appears genuine or ingeniune.

A no-sayer says it does exist, an atheist of sorts. Do you bring an atheist to the table to discuss God and the evidence of God? He is a totally irrelevant participant. If God does not exist, he cannot comment on Him, correct?

There is lots of room for skeptics in the field. I, myself, often review evidence and give an honest viewpoint on why it appears genuine or not. I do know Bigfoot exist, I have witnessed one myself. But, I also know that everything is not a Bigfoot. I am also an experiencer of ghosts, but not every audio or video is capturing a ghost.

When it comes to the Patterson film, I say this: What if the film were absolutely verified as fact - this is film of a Bigfoot walking along a creek bed taken in 1967? Now, tell me what that would mean to the film's relevance, not just as a video but as proof of a man we have not accounted for? It is beyond belief how significant that would be!

I would like to thank MK for all the hard work and endless time and expense he has undergone to give us amazing views of Patty so we can personally decide if what we see is real or farce.