Horror Movies That Ruined Our Fun 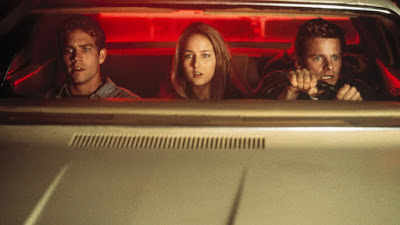 Some movies have such an impact that they forever color how we see things we took for granted before. Here are some great examples of forever game-changing movies.

Duel (1971) A business commuter is pursued and terrorized by the malevolent driver of a massive tractor-trailer.

Based on a Richard Matheson story (my favorite horror writer of all time) and directed by Spielberg and you can imagine the horror and tensions. This one comes to mind every time I'm on a long desert highway with a semi behind me driving a bit to close for too many miles.

The Blair Witch Project (1999) Three film students vanish after traveling into a Maryland forest to film a documentary on the local Blair Witch legend, leaving only their footage behind.

Getting lost in the woods? Icy cold, confusion, and something unexplained stalking them. This was a movie that forever had us looking at the forest as a hiding lair, not for critters so much as evil. The makeshift stick shapes and stone piles and turned-around confusion that leads them back to the same place repeatedly is like an urban legend unfolding in real life. Adding to its tension, the PR leading up to the movie involved it being based on real tapes that were found of a real incident. The real-life documentary-style filming and you have an audience in suspense and easily imagining themselves in that situation.

Perhaps the single-most impacting horror film affecting people's #1 summer activity, "Jaws" goes down in history for making people scared of even lakes and swimming pools. Just those few notes played create a tingle down the spine. Once again, a Spielberg wonder.

Psycho (1960) A Phoenix secretary embezzles $40,000 from her employer's client, goes on the run, and checks into a remote motel run by a young man under the domination of his mother.

Those most vulnerable moments are the ones that it doesn't take much to put us over the edge. After the movie "Psycho" and the infamous stabbing scene, it was hard not to consider who might be in the room. A quick peek around the curtains curtailed those fears.

The Hills Have Eyes (1977) On the way to California, a family has the misfortune to have their car break down in an area closed to the public, and inhabited by violent savages ready to attack.

Gathering the family up for a road trip is a summertime tradition, but in the case of this movie, the car breaks down in the middle of nowhere. When dad goes to get help, the family is under attack by feral locals. Here in the desert, where we pass man hills covered in large boulders, that movie creeps through the back of my mind. I check the gauges to be sure I have no red lights and lots of gas. But, still, every time I look at the hills, I swear someone is looking back.

A Nightmare on Elm Street (1984) The monstrous spirit of a slain janitor seeks revenge by invading the dreams of teenagers whose parents were responsible for his untimely death.

I was a teen when this came out and I recall being very nervous about my dreams and even falling asleep. The movie did something to the vulnerable sleep state that no other movie had ever done, it made us insomniacs.

Moving To A New Home

The Amityville Horror (1979) Newlyweds move into a large house where a mass murder was committed, and experience strange manifestations which drive them away.

A new house has a way of exciting people about the possibilities turning it into a home full of memories. But, some houses come with past memories. In "The Amityville Horror," the moving into a new house and people changing, things going missing, voices in the dark, all take it from charming to threatening. Once again, you aren't much more vulnerable than in your own home and when you're up against something you can't kill, you're in deep trouble.


When a Stranger Calls (1979) A psychopathic killer terrorizes a babysitter, then returns seven years later to menace her again.

You're alone in someone's house. The kids are asleep. You have a TV guide and some soda and popcorn. It's a typical babysitting scenario until someone starts crank calling you. And the calls become more and more concerning. There is nothing scarier than a teenager in charge of little ones alone in someone else's home for the evening as the darkness descends. This movie with a plot twist was a real winner for making babysitters afraid to answer the door or the phone.

Friday the 13th (1980) A group of camp counselors are stalked and murdered by an unknown assailant while trying to reopen a summer camp which, years before, was the site of a child's drowning.

Summer camp, a getaway from the parents that often drops kids right into homesickness. A strange place in the woods, a weird schedule, misbehaved kids, and a tree branch against your cabin window.... As if it isn't scary enough, imagine a killer bent on revenge. What was once a happy circle of cabins becomes a row of crypts.

Feel free to share a horror movie that ruined your fun.