Devil's Hole Caves - What Is Lurking In Them? 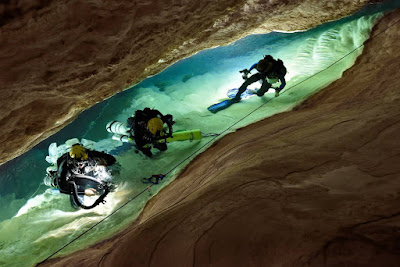 Around the world there are legends of caves and crevices that become named "Devil's Hole" for a myriad of reasons, but all of them are dark ones. Let's explore just some of the Devil's Holes found in the United States. 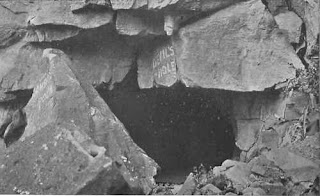 LINK:  One day, an indeterminate number of years ago, the owner of the land where the cave is located decided to check out the place.

He climbed down a rope about 200 feet to a ledge where the shaft narrows to a point that can only be crawled through. He suddenly heard a vicious hissing from the darkness, perhaps like a large lizard would do, and he made a hasty retreat.

Some time later, he and some men from town dropped a flatiron tied to a rope to the same place in the cave. They heard a hissing sound and the rope was pulled hard.

No one wanted to dare and climb down to see what was in the cave. Occasionally, local stories apparently come from the cave, but the "gow-row" as the natives supposedly call it, seems to prefer staying down in the darkness.

The story dates back to around 1900 and many believe the monster may be some sort of giant lizard.... but nobody knows for sure.


LINK:  The Devil's Hole Cave In a little unknown village called self, there lies the devil's hole cave. The local people think that there's a lizard like man that lives in the cave. The owner about 90- 100 tears ago decided to check out the cave. He climbed down a rope a couple hundred meters down. The man heard hissing and felt scrathing on his legs. Years later he tried to throw a rope down into the cave and he felt pulling and hissing. He pulled up the rope and tied a stone to it. The owner threw it down once again and heard hissing and violent pulling. He pulled up the rope and the stone was gone. The rope was also frayed. Could this be the home to the Devil? 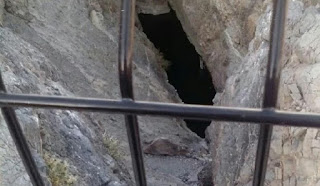 The Devil's Hole Cave in Nevada is said to have never had its depth measured. It is a water-filled hole in Death Valley that houses a rare pup fish. In 1962, two divers attempted to explore it and died. It was closed off after that. All they know is that these are water-filled caves.

As if there isn't enough mystery surrounding these underwater caves, they must extend a great distance, as earthquakes in distant places affect the water with shaking. LINK

The creepiest legends are of those who attempted to dive it.

LINK: One night in 1965, several kids jumped the fence and got in. Two never came back out, although divers attempted to rescue them in the event they were stuck in an air pocket called Brown's Room. They weren't.

Nobody knows precisely how deep Devil's Hole is; tethered weights go to at least 485 feet, with more to go.

David Rose and Paul Giantontieri entered with friends, but never came back out. Jim Houtz reconnoitered to a depth of 315 feet, then a record, but found no bodies, only a dive chart and a fading flashlight.

(Houtz's account) ... I get down into the lower chamber – and there I found a mask with a snorkel on it and a fin. Later I found another item from the other diver. But the point is, when you get that deep, you get nitrogen narcosis. Nitrogen poisoning. It’s a drunken state, and you get lightheaded. Once you get that, it’s far more probable that you’re going to do something stupid, because you feel there’s nothing you can’t do. The only reason I was able to make these dives was because I’d been training for it – for the narcosis.

I went to the surface and notified everybody about what we found. It was a very sad, very solemn moment. I said, ‘I’m going to recover the rest of this equipment and I’ll do one more thing to confirm. So I made one dive to the last little ledge – at 325 feet. At that point, the Devil’s Hole opens up wide, and I can tell you one thing. I know it goes down to over 900 feet. We once let out 932 feet of cable from that point and there’s a current down there – so how much of the cable was bowed from the current, I don’t know, but it’s just, it’s just massive. But down at 325 feet – that’s where I found the remainder of some of the gear – right there, just as big as life. I’m sure that’s where the kid wound up – in the very far depths. He just kept going down. The guys were never found. The only thing down there now is bones. 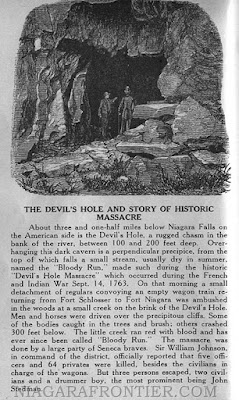 This cave has a dark history of a massacre by British soldiers of the Seneca Native People in 1763. The Native People had a special legend about it.

LINK: "Ages and ages of prosperity and happiness to the red men had passed from the time of his first creation. The Great Spirit loved his red children, and gave them this country for the sole use and enjoyment. So it would have continued forever, if the Great Falls of Onguiaahra, whose thunder, we now hear so plainly, had continued near the spot where your canoe landed. (Lewiston). But the red men became bad, and vexed the Great Spirit with their war parties. The rocks began to fall off amid thunders and storms, and scarcely a moon passed that was not marked by some change. Moons and moons passed and the falls were above this "Devil's Hole" which then became open to the rapids, and the Evil Spirit could get out.

Noise of thunder, shrieks and groans were often heard from his darkened den, which greatly excited the curiosity of the young man. One of them, a fine young brave, insisted upon examining the secrets of this dark prison house. Armed for battle, he descended with much difficulty, and we never saw him more. Then came the word that the pale faces, in the vast canoes which could each carry an army, had come out of the great sea, and landed under the midday sun. The evil was distant, and we thought little of it. Time passed on, and another of our young men descended into the cavern; he returned in a few hours, a raving maniac, and his hair, which had been black and glossy as a Raven had become white as snow. Then came the word that a paleface, Jean Cabot, had landed on the shore of the great sea, convinced that the spirit of evil lived in this deep, dark hole, and that the fate of the red man depended upon his not being disturbed.

Such declared the guide "is the tradition of our race. Judge them, my white brother, whether you could disturb the Evil Spirit in his abode, and not suffer the penalty?"

Conclusion: These are only some of the Devil's Holes around the world. It seems the names are aptly declared for locations of death and terror.