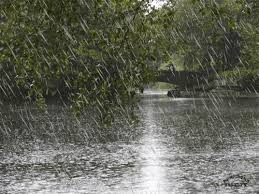 Maybe a rainstorm makes you in the mood for a dark drizzly movie or spooky endeavors. Whatever your motivation, let's check out some movies that showcase rainy weather in the horror genre and some spooky activities for such a moody day.

This list is by no means the only horror movies with rainy scenes, but they will definitely satisfy your mood.

Poltergeist
A family moves into a new housing development to find that it was built atop of a cemetery. They are tormented by ghosts.


The Amityville Horror
Newlyweds move into a large house where a mass murder was committed, and experience strange manifestations which drive them away.


The Skeleton Key
A hospice nurse working at a spooky New Orleans plantation home finds herself entangled in a mystery involving the house's dark past.


And Then There Were None
Seven guests, a newly hired personal secretary and two staff are gathered on an isolated island by an absent host and someone begins killing them off one by one. They work together to determine who is the killer?


Friday the 13th
A group of camp counselors are stalked and murdered by an unknown assailant while trying to reopen a summer camp which, years before, was the site of a child's drowning.

Gothika
A repressed female psychiatrist wakes up as a patient in the asylum where she worked, with no memory of why she is there or what she has done.

The Boy
An American nanny is shocked that her new English family's boy is actually a life-sized doll. After she violates a list of strict rules, disturbing events make her believe that the doll is really alive.


Cold Creek Manor
A family relocates from the city to a dilapidated house in the country that was once a grand estate. As they begin renovations, they discover their new home harbors a secret and may not be completely free of its former inhabitant.


The Woman in Black
A young solicitor travels to a remote village where he discovers the vengeful ghost of a scorned woman is terrorizing the locals.

I Still Know What You Did Last Summer
The murderous fisherman with a hook is back to once again stalk the two surviving teens, Julie and Ray, who left him for dead, as well as cause even more murder and mayhem, this time at a posh island resort.

EVP session: Why not just put on an audio recorder and ask questions. Plug it into your computer and upload the files and give them a listen. Wait about 15-20 seconds between questions to be sure you got a response and didn't speak over it.

Write a scary short story: Pick one thing, perhaps a scarecrow or a full moon and write a short story based on it. Try to keep the story under 1500 words.

Listen to spooky music: I'd suggest sounds of a thunderstorm or Nox Arcana for the best moody music.

Spend some time in the rain: Go outside. Don't put up an umbrella. Just stand there. Get absolutely soaking. Get under the eaves and dry off. Go inside and make some hot tea, grab a blanket, and proceed to watch a scary movie.


Enjoy your rainstorm and all the spooky mood that imparts!