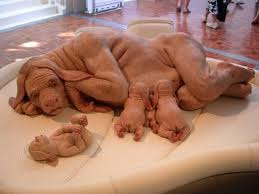 
Chimeras: Animal/man hybrids. What kind of conclusions can we make about such things if they truly exist? Well, knowing that humans and animals cannot mate and create offspring, there's only one option - DNA manipulation. If they do not truly exist, then they are an amazing human fantasy so deeply rooted, it has been in art for and mythology for thousands of years, on cave drawings, on heiroglyphs in Egypt and Greek stories.


Goat Man: (listverse) The Maryland goatman has been seen in Prince Georges County, Maryland, USA, since the 1970s. It is reported as having the lower body of a goat and the upper body of a man. He also has the horns of a goat. He’s about 7 feet tall and 300 pounds. The goatman was first sighted by a couple of lovers who had been making out in their car. The goatman had an ax in his hand, while staring at the couple. He then ran into the woods. A woman reported that she had seen the creature in her backyard while her dog was barking urgently. She was too scared to go outside and found that her dog had had it’s head chopped off, when she went outside the next morning.


Lizard Man: (Wikipedia) The Lizard Man is described as being 7 feet (2 m) tall, bipedal, and well built, covered in dark hair with scaly lizard like skin on
hands, feet and face. It is said to have three toes on each foot and three fingers on each hand which end in a circular pad on them that stick to walls. The creature has an incredible degree of strength, more
than capable of ripping into a car. It might have a tail.


Dog Man: (Wikipedia) The first known sighting of the Michigan Dogman occurred in 1887 in Wexford County, when two lumberjacks saw a creature whom they described as having a man's body and a dog's head. In 1938 in Paris, Michigan, Robert Fortney was attacked by five wild dogs and said that one of the five walked on two legs. Reports of similar creatures also came from Allegan County in the 1950s, and in Manistee and Cross Village in 1967. Linda S. Godfrey, in her book The Beast of Bray Road, compares the Manistee sightings to a similar creature sighted in Wisconsin known as the Beast of Bray Road.


Ape Man: (Wikipedia) Bigfoot, also known as Sasquatch, is the name given to an ape-like creature that some people believe inhabits forests, mainly in the Pacific Northwest region of North America. Bigfoot is usually described as a large, hairy, bipedal humanoid.


Moth Man: (Wikipedia) On Nov. 15, 1966, two young couples from Point Pleasant, Roger and Linda
Scarberry, and Steve and Mary Mallette told police they saw a large white creature whose eyes "glowed red" when the car headlights picked it up. They described it as a "flying man with ten foot wings" following their car while they were driving in an area of town known as 'the TNT area', the site of a former World War II munitions plant.


Well, what do you make of it? Does man tend to project his own upright bipedal tendencies upon other creatures? Do we wonder to ourselves - what if??? Or, is there something truly unexplained and sinister going on like DNA testing?