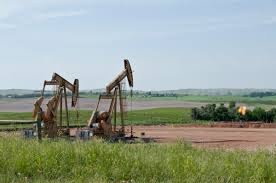 My career is based in the oil and gas industry in the brokerage arena, something I'm extremely passionate about. There is something about knowing you are a cog in the wheel that keeps people driving to Grandma's, packaging goods, flying to other countries, and bringing goods to store shelves is a very rewarding calling.

My friend and mentor who brought me into the industry, also brought with him some stories of encounters with the Tall Ones, either on leases or trekking to and from in the wee hours.

Like forest rangers, park officials, police, and others who have regular time outdoors at all hours, those who manage oil leases often report encounters. Let's look at some - 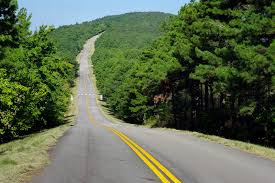 My mentor, an independent oil and gas man, had a few sightings of Bigfoot, but one was in 2002. He had a daylight road crossing at one of his oil and gas leases with one of his rig hands in Muskogee County, Oklahoma.

It was a Saturday afternoon, about 3:30 or 4 p.m. He had a friend out of work with him who said he'd come with my mentor and be a rig hand for a need that day. They pulling a well and needed more hands to retrieve the pump. A storm front was coming as the workers were pulling. They strapped things down for the coming storm. They left the area, as the tall mast makes a lightning rod in storms.

They left and came over a rise on a gravel county road. Stepping out of the culvert/ditch area from the creek area was a tall figure with something over its shoulder, held in that manner like you would move a feed bag. It came out of the 6' drop in the creek and came out onto the roadway. They were perhaps 100 yards away when they saw it. Took a couple strides and went down into the marshy area. They stopped when they got to where it had been. The gravel trackway alongside the road was still filling up with water.

The friend freaked out, scrambling for his pistol in his fanny pack. My mentor asked if he had seen it. The friend was keyed up and said "YES!"

It had disappeared into the undergrowth of the creek/marsh area.

The next day, my mentor came that way to the lease and stopped. He saw 20-30 feet of trackway into the brush. He took photos of the areas where it came from and where it went.

He put the height between 7' to 8' tall. It had a barrel chest, the v-shaped body builder physique, heavily muscular, narrow hips. It was dark all over, seemed more like skin with hair, but short hair. He couldn't see the face, as it was carrying something on the shoulder that blocked it.

A friend of the mentor was out witching with a stick at a lease area. He was out at 2 a.m. with the stick and ran right into a Bigfoot, literally tripped into it. They regarded each other and it turned and walked off.

That same man was in a car with a passenger in that same area when a Sasquatch ran alongside their vehicle, pacing them out to the highway, about one mile.

Ironically, industry geologists also saw one in that area at a different time (BFRO Report)


OBSERVED: I and one other person were in the area measuring and sampling rocks exposed near Cane Creek (we are geologists); throughout that morning, farmers had been hunting on their lands. As a result,we could hear sporadic gunfire all around us; after about thirty minutes to an hour, most of the gunfire had ceased. Some time later,as I worked, I heard a rustling sound behind me. Believing it to be some kind of animal coming towards us, I turned my head to see behind me. Immediately, I observed something hanging from a low branch over the bridge on the opposite bank of the creek from me. The first feature I noticed was the unusually long arms of the thing. Secondly, I noticed that it was covered by reddish-brown long hair. The creature has hanging from the lower branch with its arms much like an orangutan does; in fact, the hair and the way it hanging from the tree made me think of it as an orangutan. Also, for some reason, I seem to remember that the arms had less hair than the rest of the body. The entity that I saw was about four to five feet long with about half of that being arm. The body was round and squat. I did not notice the legs or head of the thing. The window of observation was about ten to fifteen seconds although I cannot be positive. Anyway, as soon as I noticed the thing, it dropped from the tree onto the ground. However, the presence of the bridge prevented me from seeing it hit the ground, but I do believe I heard further rustling sounds although that was probably just imagination. Afterwards, I asked my companion if he saw or heard anything; although he indicated that he may have heard something, he said he did not see anything extraordinary. That meant I was the only witness. We did not really search the area afterwards for traces or the creature itself. Since no other unusual sounds or sights occurred after this, we felt that nothing would probably be revealed. However, I did have a vague temporary feeling that this thing was advancing towards us. Of course, considering the brief span of observation time, the distance (about 200 to 300 feet from me), and the lack of additional evidence, I still cannot be positive that what I saw was genuine.

ALSO NOTICED: Nothing unusual was heard before or after the incident. I have been to this particular area many times. During subsequent visits, I have neither heard or seen anything unusual. No physical traces of the creature has ever been found.

OTHER WITNESSES: The person who was with me did not see the creature. We were both busy collecting samples of black shale.

ENVIRONMENT: The creature was observed hanging over a bridge spanning Cane Creek. The creature was on the opposite side of the creek from me about 200 to 300 feet away. The area was heavily forested with the branches of the trees hanging over the bridge and the road. The road is a small sectional dirt road. We were working on an exposed section of black shale and coal.


The south bank of Cane Creek was very steep being composed of these lithologies. The north bank (where the creature was) was far more gentle. Both banks were heavily forested. Cane Creek was at a low level. The general landscape was gently rolling forested hills with large, flat, treeless pastures. The latitude was about 35 degrees and 41 minutes North. The longitude was about 95 degrees and 40 minutes West.

Here's an example on a BFRO report from a 1996 sighting in Texas, Panola County.


I worked as a truck driver, I hauled crude oil and condensate off of oil leases to unload stations. I would start to work about dark and finish up right before daylight or sometimes a little earlier. I did this in Gregg, Rusk, Panola, Smith and surrounding counties. I don't remember the roads because we hauled so many different leases that my memory fails me. In the wee hours of a cool foggy morning in December I had loaded and was on my way out of the lease. We were required to open and shut the gate on these leases because of livestock and public safety. Our trailers had bright lights for seeing how to back up at night and I always turned them on when I closed gates. Just as I closed the gate and locked it, I saw something step out of the woods and onto the lease road. It paused a minute and continued on across the lease road. My blood ran cold and every hair on my body stood on end. It was only about 30 feet from me, I could see it's breath in the cold night air. If bigfoot exists, this is what I saw. It did not seem menacing. I ran for the truck and drove off, and never looked back. I have never told this to anyone, not even my wife.

OTHER WITNESSES: No other witnesses.

It goes without saying that those in industries that put them out in the field in remote areas with resources, they are likely to run into Bigfoot. This is so common in in the oil and gas industry that many kid about it.

If you have a report from the industry, please let me know.
ghosthuntingtheories@gmail.com