Horned Giants of the Past? 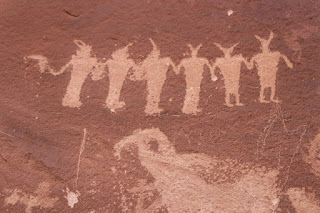 There is chatter in the research community about a possible race of ancient giants with horns. There are some reasons to ponder this. One of the most apparent are the horned, large, broad-shouldered men portrayed in ancient petroglyphs around the globe. 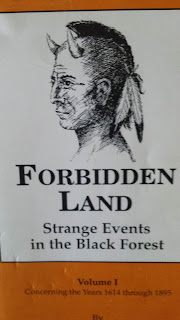 Page 71: Indians with horns. Eight hundred and more years ago, giant Indians with horns roamed the black forest beneath giant trees. At Tioga Point, on the Murray farm, a short distance from Syre, in Bradford County, an amazing discovery was made by G.P. Donehoo, State Historian and a former minster of the Presbyterian Church in Coudersport, together with Professor A.B. Skinner of the American Investigating Museum and Prof K. Morehead of Phillips Andover Academy, uncovered an Indian mound. They found the bones of 68 men which were believed to have been buried around the year 1200.

The average height of these men was 7 feet, while many were much taller. On some of the skulls, 2 inches above the performed formed forehead were protuberances of bone, evidently horns that had been there since birth. Some of the specimens were sent to the American Investigating Museum.

We have more evidence that very tall men once lived in the Black Forest. In December 1886, WH Scoville of Andrews Settlement discovered an Indian mound a of Ellisburg. When opened, a skeleton was found. It was close to 8 feet in length. Trees on and around the mound indicated that burial had been made at least 200 years before."

LINK:  A 30 + year old male skeleton was unearthed in a mining area of the El Paso area. Skull had two small horns protruding from the forehead area. Witness of this was Texas Ranger investigating another murder case .

Man in ancient times appeared to be preoccupied with the concept of large men with horns and artwork portrayed it, as well as indigenous people wearing them in ceremony. 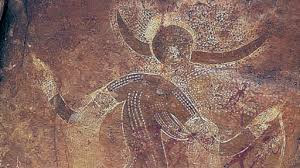 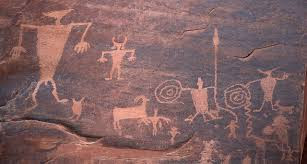 There is a condition called "cutaneous horns" in which a person in elderly years might grow a keratinized horn on their skin, usually on the head where there has been much sunlight upon it all their lives. This, however, is rare and doesn't take on a perfect symmetry or location to account for skulls with horns in ideal placement. 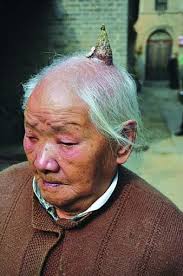 Photos of supposed horned skulls abound online and in a world in which bogus pieces are easily manufactured, one cannot testify to the origins. If such a race did exist, it is my hope that when one is happened upon again, it is documented flawlessly so there is no question about authenticity.

For now, it's interesting to ponder....