Electronic Voice Phenomenon: How the Skeptics Got It Wrong Part 4 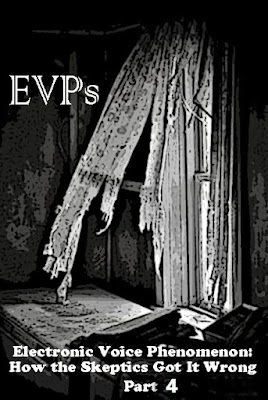 *This is a special guest post in the series by our team's EVP specialist, Jim Kelly. For prior installments, go here - LINK*


when a child refuses to cross over

Is EVP proof of ghosts?

I get asked this question a great deal from paranormal investigators and people just interested in what I am doing in the field.

First of all, the definition of what a ghost is can be different for everyone. Reports of ghosts historically go back to nearly every culture on the globe. In fact, most people don’t scoff at the idea of ghosts even today. The media’s saturation of paranormal shows is part of the reason for the recent acceptance of the beliefs of ghosts in our society. People are now interested and want to participate in the study of ghostly phenomenon in general. The attraction to the unknown is great. Especially if it concerns life after death issues.

Are ghosts the spectral beings of the dead? Maybe.

Are ghosts just left over residual energy from human consciousness that survives somehow when we pass on? Maybe.

Are we interacting with an alternative intelligence from multiple dimensions where sometimes their world bleeds into ours and vice versa? Maybe. Instead of calling this type of phenomena ghosts, I choose to call it paranormal phenomena. I just don’t know if we are contacting the conventional ghost or something else in our environment that we just can’t understand.


What about all of the case studies from noted parapsychologists who have accumulated vast amounts of data about people with psychokinetic abilities that may cause haunting type symptoms such as creating voices and moving objects with their mind not even knowing it? We call them haunted people. Where do they fit into the puzzle?

There are so many theories abound, and with so many researchers in the field with differing opinions it’s hard to navigate through this controversial subject. I can only analyze my own evidence gathered on investigations over the years to formulate my opinion.

What I can tell you is that EVP is key to unlocking paranormal phenomenon at an active location based on my own experiences If it is captured in a controlled environment. And that is a big if.

It distresses me to see paranormal investigators not using any environmental control features in their investigations. It is understandable why many skeptical people dismiss EVP entirely. Its amateur hour out there folks, and it’s a sad thing to see.

Patterns have emerged over the years in my evidence and I can tell you that EVP might be one way spectral intelligence attempts to communicate with us.

We have talked about how EVP imprints on multiple recorders in the same area even though we can’t hear it being captured on recording devices until the recording devices are played back. This defies logic and goes against the principle on how sound travels through our environment.

Now, I will present a case that easily could be proof of a ghost or an alternate intelligence using EVP capture. It was evidence backed by witness testimony.

Several years ago we were contacted through our website by a construction company located by a busy shopping mall not too far from my home. The owner explained that three employees had sighted an apparition inside his small warehouse adjacent to their offices. He wanted to know if we could conduct an investigation. Several of us stopped by and interviewed the witnesses. All of them had been working on a large table sawing raw materials and sensed someone staring at them.

In each eyewitness account they turned around and saw a small Hispanic boy staring at them. The child then disappeared after a couple of seconds in all three accounts after making eye contact. One of the people that witnessed this reported that he had also sighted black shadows and masses darting around in the warehouse on several locations.

Our group conducted a full investigation but captured nothing on any of the video cameras. I set up audio stations throughout the warehouse. We had audio recorders in each corner of the building to intercept outside noise pollution, plus, some in the middle of the room next to the location where the apparition of the child had been sighted. We had an EVP station set up with chairs and a table so there would be no inside human sound contamination and rotated teams of 4 each for the entire evening in tightly controlled EVP sessions.

Nothing much happened during the investigation. Since it was a warehouse, any type of sound was amplified greatly throughout the structure. It was as though we were talking in a large auditorium.

Now, don’t be alarmed if you can’t make this out. Everyone in the group heard the voice but each of us had a little different interpretation of it. I thought the EVP said “We live in here!” During the reveal of evidence to the owner of the company, he also heard “We live in here” as well after playback of the clip and we did not tell him what we heard. He told us first.

This next clip you hear from a nearby recorder did not pick of the EVP voice at all. This confirmed that it was not a voice from the outside bleeding in. After you hear the question “Is this your home?” you will notice that I ran the clip until the next EVP question by a male investigator was asked. Click on the sound file below:

We call this the “verification file.” In fact, the EVP captured did not imprint on any of the other recorders in the building and this is proof that it was not a natural voice in or outside the building. In clip one you heard the EVP. In clip two you don’t. This is proof that it was not noise contamination as the skeptical and scientific community would lead you to believe is a major cause of EVP.

In clip # 3, I have slowed down the EVP voice slightly and compressed the file to remove most of the hissing. See if you can hear it more clearly. We now know it's 4 words total. This is the EVP voice only on the filtered sound file below:

I was interested in the surrounding area next to this construction business. It was located in a historical land mass that once thrived in agriculture in the 1800’s. In fact, there was an old river running through this location and it was settled by Mexicans and then by Mormons who worked and lived in this area to cultivate and sell crops. I did find that the earliest photo taken was in the 1960’s and it showed nothing but farm and marsh land located where this construction business was now situated.

I decided to check out the other business locations in this very small industrial park. None of the other locations in the area complained about paranormal issues except one. And that business was very receptive to talking to me about their experiences which I find rare for a business to do. They spoke of everything from seeing black shadows, object movement, floating faces, phantom footsteps, and gates opening and closing by themselves at night often scaring the evening crews working in this small shipping company.

It was then that I noticed that this location was over the wall just a few feet away from where we had captured the EVP evidence in the building we were investigating!

Our team surmised that this might be a land-based haunting. Two places so close together experiencing such wild type intelligent activity was a great indicator of this.

Why does this EVP our team captured lend credence to the possibility of it being a ghost? I asked this question in the beginning of this article.

Listen to the first EVP clip again, Even though some if it might seem unclear to you, it was captured in the exact location just behind the table where the apparition of the Hispanic boy was seen by three different witnesses! Even if the audio clip is not clear, it is without a doubt the voice of a child. This is supporting evidence of how a reported apparition ties into EVP audio evidence. The audio evidence directly supports the multiple witness testimony.

In the case of our Main Street Grille investigation we captured the voice of a young person or possibly that of a female apparition on audio that was seen walking back and forth in front of a window near the entrance of the building.

We captured this EVP of “Say Goodbye” just after turning on a recording device then walking away from the area where she reportedly dwells. This is more evidence supporting reports of apparitions backed up by EVP evidence. Click on the video below. The EVP is the last voice you will hear on the clip:


We can now tie in EVP evidence to hauntings in some cases. Is EVP proof of ghosts? In some instances it very well could be. But, each investigation must be evaluated on its own merit. When direct evidence directly ties into witness testimony, it can’t be dismissed. Even by the skeptics…….

*For more from our team, go to our site and the "blog" on there. LINK *