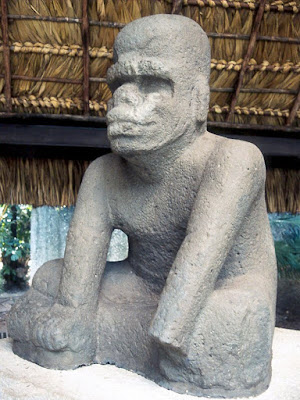 Rather primitive features unrelated to the indigenous people around the world have been found in ancient art. What did these people encounter? What inspired these works? Perhaps ancient legends can help illuminate this mystery.
OLMEC 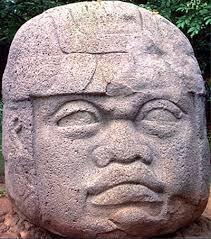 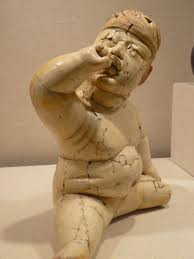 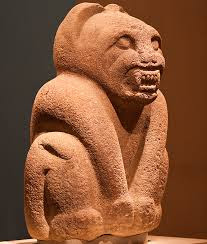 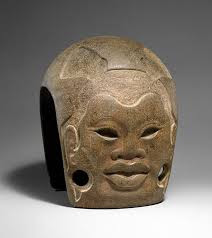 The Olmecs were a Mesoamerican culture existing 1200 BCE to 400 BCE. They came before the Mayans and the Aztecs. Their art portrays facial features that appear vastly different than the "native" people. As well, there are what many anthropologists refer to as anthropomorphic figures (incorporating animal and human features). This practice of odd-looking people is found around the world. But, why? Even today, we don't run into many artists who give humans animal traits, unless they are a cartoon artist. 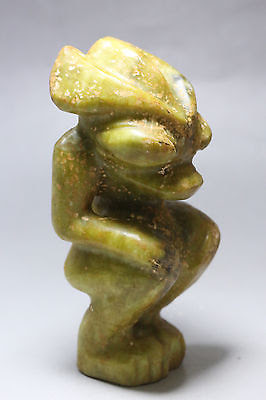 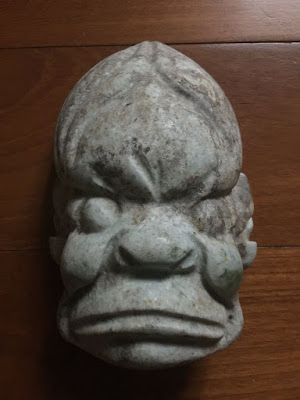 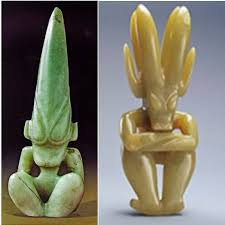 The Hongshan Culture of Northeastern China dates back to 4700 to 2900 BCE. This is quite the ancient culture and yet their carvings were flawless and their subjects were, well, unusual. 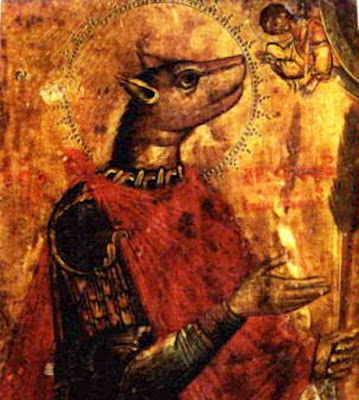 Saint Christopher was said to be dog-faced.

On these mountains there live men with the head of a dog, whose clothing is the skin of wild beasts. They speak no language, but bark like dogs, and in this manner make themselves understood by each other. Their teeth are larger than those of dogs, their nails like those of these animals, but longer and rounder. They inhabit the mountains as far as the river Indus. Their complexion is swarthy. They are extremely just, like the rest of the Indians with whom they associate. They understand the Indian language but are unable to converse, only barking or making signs with their hands and fingers by way of reply, like the deaf and dumb. They are called by the Indians Calystrii, in Greek Cynocephali[“dog-heads”]. They live on raw meat. They number about 120,000.


The Cynocephali living on the mountains do not practice any trade but live by hunting. When they have killed an animal they roast it in the sun. They also rear numbers of sheep, goats, and asses, drinking the milk of the sheep and whey made from it. They eat the fruit of the Siptakhora, whence amber is procured, since it is sweet. They also dry it and keep it in baskets, as the Greeks keep their dried grapes. They make rafts which they load with this fruit together with well-cleaned purple flowers and 260 talents of amber, with the same quantity of the purple dye, and thousand additional talents of amber, which they send annually to the king of India.


They exchange the rest for bread, flour, and cotton stuffs with the Indians, from whom they also buy swords for hunting wild beasts, bows, and arrows, being very skillful in drawing the bow and hurling the spear. They cannot be defeated in war, since they inhabit lofty and inaccessible mountains. Every five years the king sends them a present of 300,000 bows, as many spears, 120,000 shields, and 50,000 swords.


They do not live in houses, but in caves. They set out for the chase with bows and spears, and as they are very swift of foot, they pursue and soon overtake their quarry. The women have a bath once a month, the men do not have a bath at all, but only wash their hands. They anoint themselves three times a month with oil made from milk and wipe themselves with skins. The clothes of men and women alike are not skins with the hair on, but skins tanned and very fine. The richest wear linen clothes, but they are few in number. They have no beds, but sleep on leaves or grass. He who possesses the greatest number of sheep is considered the richest, and so in regard to their other possessions. All, both men and women, have tails above their hips, like dogs, but longer and more hairy.


They are just, and live longer than any other men, 170, sometimes 200 years.
– Photius’ Excerpt of Ctesias’ Indica 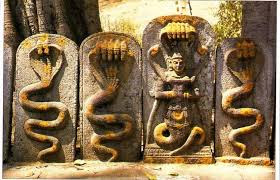 (LINK) Naga, ( Sanskrit: “serpent”) in Hinduism, Buddhism, and Jainism, a member of a class of mythical semidivine beings, half human and half cobra. They are a strong, handsome species who can assume either wholly human or wholly serpentine form and are potentially dangerous but often beneficial to humans 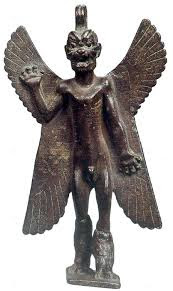 Pazuzu was the king of the demons of the wind in Mesopotamia. 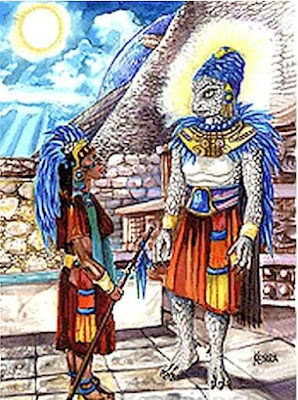 The Hopi speak of the Sheti or "snake brothers." This Hopi legend, like all Native Legends, speaks of a history that we dismiss but it would behoove us to take a real look at what they were recording for us orally long before written documents.

They described an early race that built cities underground in the Southwest. One such example was reported in the 1934 LA Times "Lizard People's Catacomb City Hunted."

“Busy Los Angeles, although little realizing it in the hustle and bustle of modern existence, stands above a lost city of catacombs filled with incalculable treasure and imperishable records of a race of humans further advanced intellectually than the highest type of present day peoples, in the belief of G. Warren Shufelt, geophysicist mining engineer now engaged in an attempt to wrest from the lost city deep in the earth below Fort Moore Hill the secrets of the Lizard People of legendary fame in the medicine lodges of the American Indian. ”

Shufelt learned of the legend of the Lizard People after his radio X-Ray had led him hither and yon, over an area extending from the Public Library on West Fifth street to the Southwest Museum, on Museum Drive, at the foot of Mt. Washington.

“I knew I was over a pattern of tunnels,” the engineer explained yesterday, “and I had mapped out the course of the tunnels, the position of large rooms scattered along the tunnel route, as well as the position of deposits of gold, but I couldn’t understand the meaning of it.” 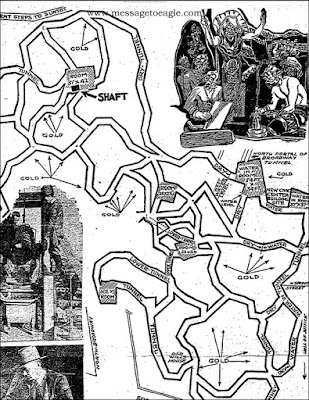 Interestingly, such finds were reported at different times in the Grand Canyon and in Death Valley. The Paiutes spoke of the hav-masuvs who hid in the tunnels under Death Valley and could fly in the sky in vehicles. The Hopi spoke of the Sheti and the ant people and in the Grand Canyon there was a reported cave find of an ancient culture and treasure.

These "myth" patterns are not coincidental. 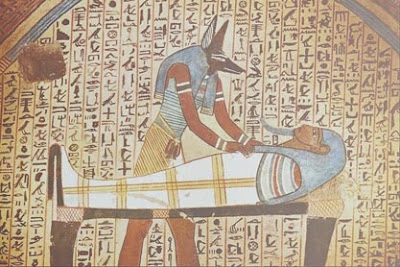 Anubis was an Egyptian god that handled afterlife, mummification, a protector of graves. 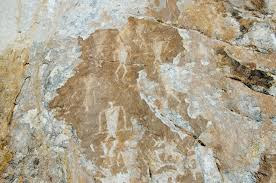 (LINK) Medieval travellers Giovanni da Pian del Carpine and Marco Polo both mention cynocephali (dog-heads). Giovanni writes of the armies of Ogedei Khan who encounter a race of dogheads who live north of the Dalai-Nor (Northern Ocean), or Lake Baikal.

Even today we hear about supposed dog-faced humans and reptoid beings. Was there any basis for this in the past? Are we seeing remnants of a true population from the past or was man, around the world, daydreaming about man-animal chimeras?