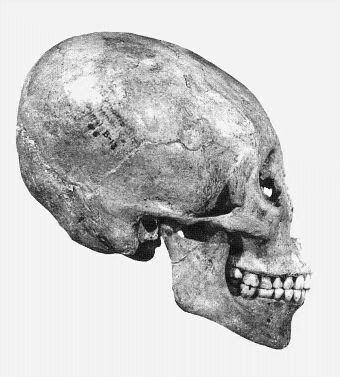 
There appear to be some inconsistencies in what the government-directed Bureau of American Ethnology/Smithsonian reported about the Native People of America and what they actually know. Much of it seems to be orchestrated, but for what end? Let's look over some evidence and discuss the possibilities.

Unusual skulls discovered in America were classified vaguely as "otamid" or archaic features. They show a vastly different origin than the Amerindian people. The os inca bones created an elongated looking skull. This was a natural feature, not one of binding, but the way the skull simply was shaped for the origins of these people. The jaws, as well, showed signs of people designed to be carnivorous. Some tribes found with otamid head shapes were coastal tribes such as Karankawa, Pericue, and Yaghan. 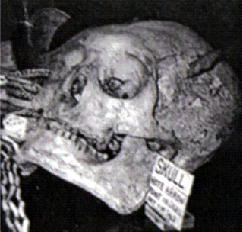 In the latter half of the 1800s, the government decided to start a bureau to study the native people of the continent and then moved the information about these people from the Department of the Interior to the Smithsonian Institution.

(LINK) The Bureau of American Ethnology (or BAE, originally, Bureau of Ethnology) was established in 1879 by an act of Congress for the purpose of transferring archives, records and materials relating to the Indians of North America from the Interior Department to the Smithsonian Institution. But from the start, the bureau's visionary founding director, John Wesley Powell, promoted a broader mission: "to organize anthropologic research in America." Under Powell, the bureau organized research intensive multi-year projects; sponsored ethnographic, archaeological and linguistic field research; initiated publications series (most notably its Annual Reports and Bulletins); and promoted the fledgling discipline of anthropology. It prepared exhibits for expositions and collected anthropological artifacts for the Smithsonian United States National Museum. In addition, the BAE was the official repository of documents concerning American Indians collected by the various US geological surveys, especially the Geographical and Geological Survey of the Rocky Mountain Region and the Geological Survey of the Territories. It developed a manuscript repository, library and illustrations section that included photographic work and the collection of photographs.

Interestingly, the Dept of Ethnology was tasked with studying the ancient mound culture in America. Upon examining these mounds, any unusual findings that did not jive with the Native People as they knew them, would disrupt society at the time.

Let's recall that in the latter 1800s, having tipped the apple cart with "On the Origin of the Species" published in 1859, society had taken on some tacit acceptance of the concept of evolution. Now, a dichotomy occurred between science and church like never before.

Findings in ancient mounds, if they involved a civilization that mined, that was very advanced, that had unusual physical proportions (say, an average height of over 7'), would be a conundrum to the government. They were tasked with understanding the Native Culture and helping the European citizens to allow lands for the original people and preservation of their culture. But, no where in their doctrines did they have a place for "other" people. These "others" may not have matched Homo sapiens nor the explanation in the Bible for man's existence.

Imagine this: The church was greatly disrupted by the notion God didn't drop a man and woman upon the earth to procreate 6000 years ago, but instead we evolved from a process over time that allowed certain characteristics to survive the process and procreate naturally at the whims of the environment and without guidance.

Now, there is another type of man discovered that defies what they knew at the time about evolution. At least Darwinism said "only one man survived," but now they were facing a man that obviously was here on the continent and living when the first Amerindians arrived.

This man may have outdone us, been smarter, stronger, prior to us. The Amerindians' legends even tell of the ferocious people who were here when their people came.

Now, in one fell swoop, giants disprove Adam and Eve concepts and also Darwin's law of evolution citing that Homo sapiens were the superiors. Basically, we weren't only not made in God's image (according to Darwinian Law) but we weren't even the superior evolutionary process, we simply outbred compared to the others.

So, in what ways might the government try and withhold important information from us? Let's look at government paperwork from the mid 70s that describes an historic Native site but has some inconsistencies. This is for a location in Idaho known as "Birch Creek Rockshelters." 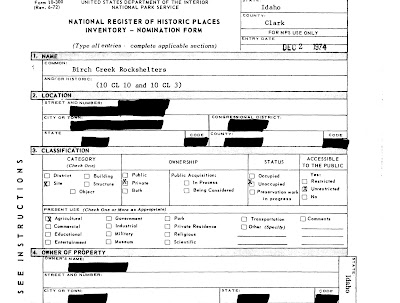 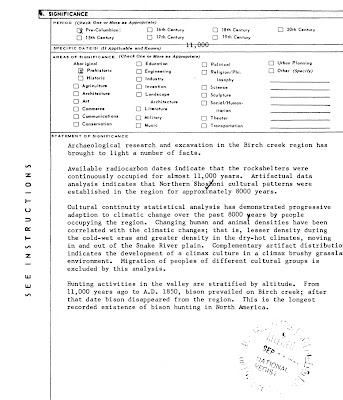 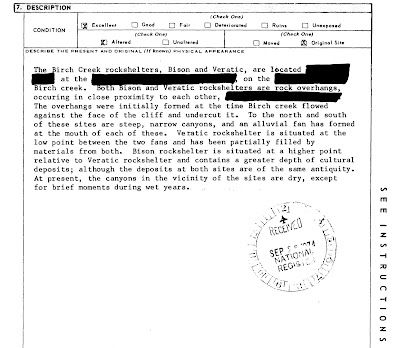 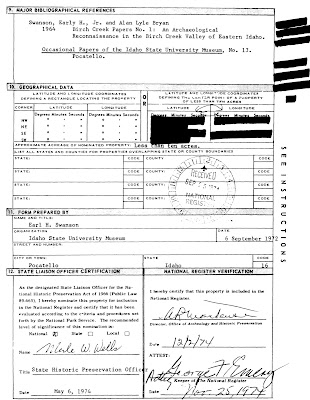 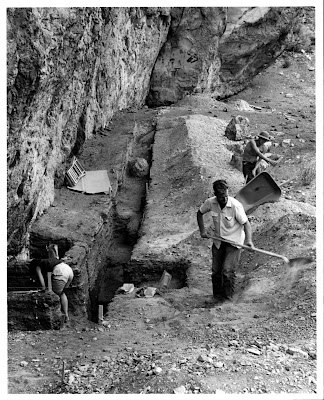 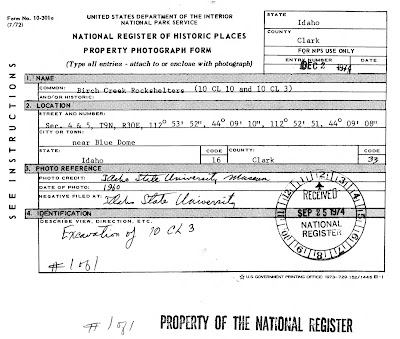 The rockshelters were "continuously occupied for almost 11,000 years." (third page photo above) 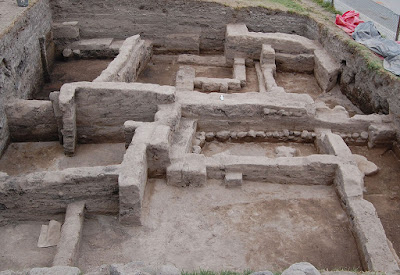 While the government was willing to contend the shelter was used 11,000 years ago by bison hunters, they don't list anyone occupying it until 8000 years ago when Shoshone were in the area. But they know there were hunters there for 3000 years. Who these original people were is a great mystery. Yet, today, archaeological digs there put people at the site around 2800-3200 years ago, making Native Americans the likely occupants, but who were the occupants the other 6800 years? 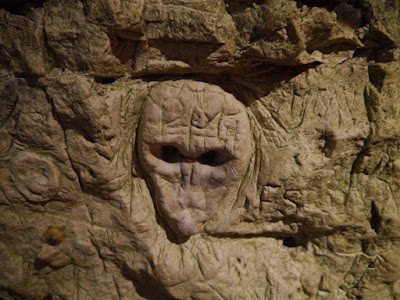 (above) an interesting carving in the area. Was it depicting the people with "elongated" heads? Just another mystery I plan to pursue further and share what I find.

How many sites by an prior people were later inhabited by Native People? What do we know of these priors? We know a fair deal as Native legends repeatedly tell of the prior people, a ruthless group of giants by their telling.

A find of an 11,000 skull in Brazil (LINK) resembled aboriginal/Australian native people more than Asian/Amerindians. The skulls of our coastal indians that have gone extinct were shaped like the South Pacificers. The DNA of those people reveals Denisovans in ancestry. Were the first people of the Americas those of the Denisovans lineage or the Asian? We keep finding clues.


Interesting discrepancies that remind me of the "Slope-headed Ones" I found the archaeological paper on from university records and then after sharing the findings online, it went down from the online archive site.

I will be following this up with some researchers in the area and hope to report even more in the future.