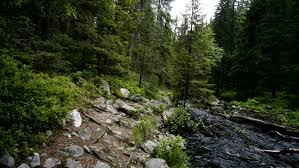 The wilderness is our getaway, a place to unwind and retreat, relax, and soak in the beauty. But, what if we weren't the only one there? And, what if the "other" was not so happy you arrived? Here are a variety of "chased in the wilderness" themed movies -


Descriptions from IMDB, the premiere site for all insider information on movies, stars, filming locations, trivia, and more.

Just Before Dawn (1981) Five campers arrive in the mountains to examine some property they have bought, but are warned by the forest ranger Roy McLean that a huge machete-wielding maniac has been terrorising the area. Ignoring the warnings, they set up camp, and start disappearing one by one. If that sounds too run-of-the-mill, there's a genuinely shocking plot twist half-way through...
Wrong Turn (2003) Six people find themselves trapped in the woods of West Virginia, hunted down by "cannibalistic mountain men grossly disfigured through generations of in-breeding."
The Final Terror (1983) A group of rangers go camping on unfamiliar forest grounds. All is well until the group members begin to start getting picked off by a cunning, tactical, malevolent, killer in the woods.

Nightmare at Bitter Creek (1988) Four vacationing women back-packing in the Sierra mountains unwittingly stumble upon a hideout, and are terrorized by a ruthless group of Neo-Nazis in a deadly game of cat and mouse. With only an alcoholic ex-cowboy as a guide, the women must struggle for their lives when it becomes apparent that their trackers have no intention of letting them leave the mountain alive.

Incident On and Off a Mountain Road (2005) While driving at night along a lonely road through the mountains, Ellen gets distracted by her radio and hits a car parked on the road. She faints and looks for help since her car does not start again. She meets Moonface pulling a woman in the woods. He's a deranged monster-like man that collects human bodies. She is abducted by Moonface, but she recalls the survival lessons of her husband Bruce as she faces and fights back against the killer.

Day of the Animals (1977) A battle for survival as hikers encounter a chemically imbalanced forest.
Deliverance (1972) Intent on seeing the Cahulawassee River before it's turned into one huge lake, outdoor fanatic Lewis Medlock takes his friends on a river-rafting trip they'll never forget into the dangerous American back-country.
The Hills Have Eyes (1977) On the way to California, a family has the misfortune to have their car break down in an area closed to the public, and inhabited by violent savages ready to attack.