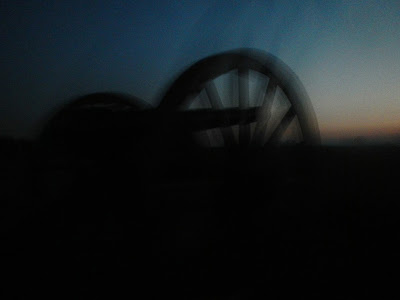 It's one thing to break down on a road trip and quite another to be faced with a strange world, as well. Here are some creepy horror movies that are based on the premise that some places are just wrong to be helpless in -

Wrong Turn
2003
Six people find themselves trapped in the woods of West Virginia, hunted down by "cannibalistic mountain men grossly disfigured through generations of in-breeding."

Tourist Trap
1979
A group of young friends stranded at a secluded roadside museum are stalked by the owner of the place, who has the power to control his collection of mannequins.

The Hills Have Eyes
1977
On the way to California, a family has the misfortune to have their car break down in an area closed to the public, and inhabited by violent savages ready to attack.


Dawn of the Dead
1978
Following an ever-growing epidemic of zombies that have risen from the dead, two Philadelphia S.W.A.T. team members, a traffic reporter, and his television executive girlfriend seek refuge in a secluded shopping mall.

House of Wax
2005
A group of unwitting teens are stranded near a strange wax museum and soon must fight to survive and keep from becoming the next exhibit.

The Blair Witch Project
1999
A group of unwitting teens are stranded near a strange wax museum and soon must fight to survive and keep from becoming the next exhibit.

Wind Chill
2007
Two college students share a ride home for the holidays, but when they break down on a deserted stretch of road, they are preyed upon by the ghosts of people who have died there.

Maximum Overdrive
1986
A group of people try to survive when machines start to come alive and become homicidal.


The Old Dark House
1932
Seeking shelter from a storm, five travelers are in for a bizarre and terrifying night when they stumble upon the Femm family estate.

Disappearance
2002
A family driving through Nevada decides to take some snapshots at an out-of-the-way ghost town named Weaver, and horrible things start happening.

This is a huge genre and there are so many movies involving being stranded, usually just being stranded in a spooky place, but sometimes the world the characters enters is quite alternative.