Horror Movies With an Autumn Feel 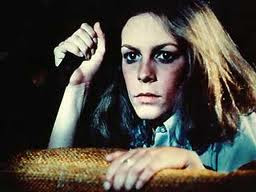 You know you want it. You've had enough heat and humidity and are glad to be releasing the kids back to school soon. Now, you're getting that nesting instinct to make soups and chili, sip hot cocoa, watch the leaves turn, and get creeped out by the Halloween season. So, go for it! Get your spook on with autumn-themed horror movies! 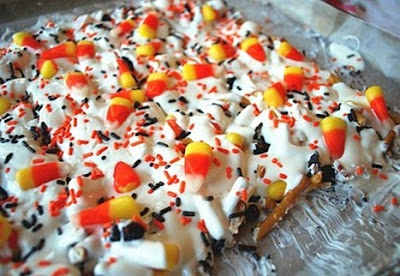 This bark candy is perfect for movie watching. Take a cookie sheet and lay wax paper down on it. Now, spread out some pretzels, marshmallows, nuts, candy corn, dried fruit, whatever you want! Melt white or semi-sweet chocolate and add some vanilla or peanut butter, and spread atop of the items. Put cookie sheet in fridge until firm. Then break into bark pieces and put in a container.

Now, here's your best "I'm scared in Autumn" movie choices -  The first ones are my favs for horror and autumn concentrated!

"Sleepy Hollow" This Johnny Depp movie takes place in the full autumn season in an almost surreal and bloodless looking Hudson Valley. You can almost hear the leaves blowing, smell the chimney smoke.


"Trick R Treat" This collection of stories takes place on Halloween night and has a dark and spooky feel. It is very good at capturing the festivities and the urban legends.

"The Covenant" This is sensual and lush in a New England autumn with leaves blowing across the streets, a boarding school, and a kicking soundtrack.


"Shattered Silence" (aka as "When Michael Calls") If you were a kid in the 70s, this movie will make you nostalgic. Very New England in autumn feeling and school carnivals and the like.

"Night of the Scarecrow" This 1995 movie has a town keeping a secret from the distant past, but the secret comes alive in a scarecrow that torments the founding families. This farmland rural setting is good.

"Night of the Living Dead" (on Netflix streaming) This classic black and white zombie movie feels like Maryland in the autumn. It is stark and bleak.

"Halloween" It may have been filmed in Hollywood, but even with a low budget and a bunch of leaves and a fan, they were able to make us believe it's autumn.

"Brotherhood of the Wolf" This lush French werewolf movie is woods and fields, towns and done in the chilly feel of gorgeous sets.

"Salem's Lot" This 1970s mini series seriously creeped us kids out and it had a very autumn, chilly, New England feel to it.

"In Dreams" (on Netflix streaming) This Robert Downey Jr movie has a seriously chilly autumn feel and even has part of the set inside an abandoned apple juice barn. It is beautiful, especially the opening scene of divers in a lake where a church and cemetery remain from a flooded town.


"Wolfman" This remake had a good chilly forest and lots of atmosphere. Gothic feeling.

"The Fog" It's the fog and the darkness that make this have a cool and chilly feel.

"Kaw" A town being attacked by blackbirds has a very rural and chilly autumn feel. Creepy atmosphere.

"Dead Silence" (on Netflix streaming) You don't like ventriloquist dolls? Well, imagine a spooky dark atmosphere, a cemetery, a crawlspace, an abandoned theater filled with dolls... This has atmosphere and mood up the wazoo

"Trollhunter" (on Netflix streaming) This gorgeous Norwegian setting is icy, forested, chilly alpine lakes. It has a very autumn tone to it.

"The Amityville Horror"  This movie of a family cursed by a haunted home has a very chilly feel.

"What Lies Beneath" This tense drama between husband and wife with Harrison Ford has an autumn feel to it and beautiful setting.

"The Exorcist" (on Netflix streaming) This horror movie about a possessed adolescent was cold, bleak, and dark.

"The Awakening" (on Netflix streaming) This beautifully filmed ghost story takes place in the English countryside with a very chilly feel.

"The Watcher in the Woods" This movie set in England and a family moving into a home with a secret has a beautiful woodland feel with autumn bite.

"The Woman in Black"  This gorgeous film set in the UK has a bleak, lonely, castle feel.

"Campfire Tales" This grouping of urban legends is tense and well done with an autumn feel to the stories.

"Half Light" This Demi Moore movie set in Ireland has a chilly lighthouse feel.


"The Messengers" This farmland ghost story has a bleak feel.

"When a Stranger Calls" (remake)  The remake sets the babysitter's sitting home in an autumn lakefront location.

"Chernobyl Diaries" This movie about couples wanting to urban explore Pripyat, the abandoned irradiated town, has a bleak and barren feel.


"Final Terror" Young adults working in the forest run into an urban legend killer. Has a chilly camping feel.