The Alchemy of Hauntings 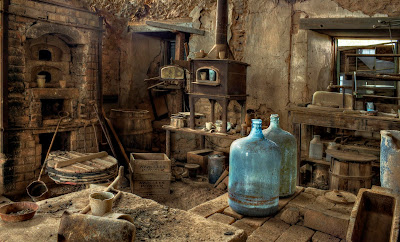 A person dies in a building and it's haunted, right?


Considering how many buildings and how many deaths, especially the fact that 100-year-old buildings had their residents dying in them regularly instead of hospitals, we should have a lot more haunting situations than we do.

Why does one building hold a haunting while another with a similar history does not?

GEOLOGY/COPPER/QUARTZ/SPRINGS/LEYLINES
Mining towns like Tombstone are riddled with active hauntings, even though the buildings are wood structures - the copper running throughout the earth beneath the town seems to set an alchemy that counters poor building construction. Therefore, geology trumps building construction. Limestone is often found in haunting locations, as is granite, but it would appear that copper/quartz have an ability to be more potent to buildings that otherwise would be lesser vessels of spirits. Springs and waterways with moving water nearby are often reported near haunted sites and there are some theories about the inherent power of churning water. Leylines are the reported lines of energy running through the earth and where leylines converge, it is believed are power centers or vortexes. Many ancient sites are atop of such convergences, thought to be because of their amplified power.

Stone buildings seem to create their own sort of harnessing of energy and hold it within the walls. A building such as Trans-Allegheny Lunatic Asylum in Weston, WV, is a building that I consider to be the single best spirit vessel in America because it has all these traits - to an amazing degree. And, it even starts with being the largest stone building in America on top of great geology (limestone), running streams, cemetery, tragic history, plenty of deaths, feng shui - doors in hall do not line up.... 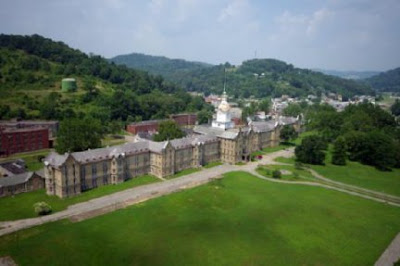 In the case of Trans-Allegheny, the fact that the doors in the hall do not line up creates an interesting scenario in which the hallway would be particularly active, as energy can exit a doorway and be met with a wall and begin a bouncing journey through the hall. Had the doors lined up and energy could go in one doorway and through the other, you would have paths of energy you could walk through and feel, but nothing lingering. It's the cul-du-sac effect that makes this intriguing. 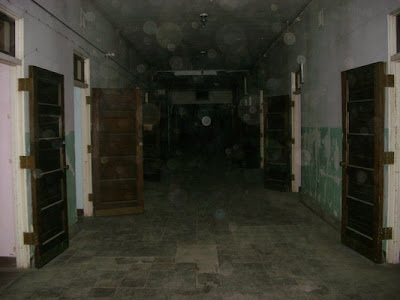 Records had revealed thousands of deaths there, but this was not like a sanitorium where people were sick, weakened, and unable to put off the kind of mental trauma that we see in good haunting vessels. These people's mind energy and mental illness and inner torment was such that it basically stained the space.

When I speak about other dimensions in my theories about the other side, it's not sci-fi nonsense. A 2-D impression of us, a photograph, takes our 3D space and represents this 3D world in a 2D form. We are sharing our space in different ways. When we have trauma and death, we are imprinting the space in which we are in, that includes the other dimensions in which this ghostly activity comes from. If I stop and take a look at the 2D photographic version of me in my 3D world, I appreciate what it represents and there is an interaction. When we pass into the next dimension (I think a better term than "world"), we have marked an area in the 3D world that still can detect that portal we utilized. It has changed our 3D environment in that spot, a moment in which we turned from 3D form in this physical world to the next realm.

Continuing on the theme in the last paragraph, imagine the imprint we leave in spaces by trauma, anguish, mental illness, fighting, and arguments? Why do you think battlefields, prisons and asylums feel so powerful? The spiritual aspect of us (that which moves to the next dimension upon death) senses these things of the next realm - spirit knows. That's the same as psychic skills. Psychic skills are basically utilizing the spirit that can touch, feel and sense the next realm.

Why would solar flares have an effect? Well, the geomagnetic storms that result from them do seem to have an effect on human physiology and we still do not know what effect this might have on stone, buildings, and activity in general. Infrasound's effects on something as simple as water molecules is an interesting realization - if it does this to water - what does it do to our bodies? People in the range of infrasound (sound waves below our ability to hear with our ears) often report feelings of paranoia, being watched, seeing shadow people....

The humans interacting in the building, living there, perceiving the hauntings have their own body physiology--electrical and chemical, their own physiologic reaction to drugs/geomagnetic storms/and stress, combined with belief systems and interpretation skills that either enhance the ghostly encounters or perhaps stimulate them.  Sensitives/empaths/psychics and those who have encountered paranormal in other residences, might be better activators or attractors of activity. The emotional state of the people within the building - whether they congregate for prayer or they have repressed anger, all have vastly different effects on the environment. The accepted belief that humans create or instigate poltergeist activity in the form of psychokinesis is a valid one. I, myself, have seen objects move toward me that were metal - defying all physics as we know it. I became a momentary magnetic of sorts. Hmmm....

A study I performed in 2009 about 50 very active haunted locations around the country revealed some very intriguing findings.


"Haunted Formula" (50 sites) This was looking at 6 traits of a site to find out how many of these traits each site had to get a "number" on how haunted it was. 5-6 was exceptionally active, 3-4 was mild haunting and less was not very active or not active at all. (6 traits - geology, construction, waterway nearby, railroad tracks nearby, death, older than 50 years)

In conclusion, we find that there are many factors to consider in whether a site could have a potential haunting and perhaps even the type of haunting -- feng shui could tell you where activity might pool in a building, the trauma history of when people left this realm for the next might show you hot spots, the geology and construction might tell you if it is even a potential vessel, given its history, and the emotional/physiologic/mental condition of the people investigating on the team can have an effect, as well. If the environment affects us and we affect the environment, we could be creating an alchemy in a moment in time in a space in this dimension that leaves a beacon or a memory for all time. In the right conditions, it becomes activated.

It's a good idea to consider all these aspects and even to have investigators write down their emotional or even hormonal states before a study and have them fold that up and put it away until afterwards so you can compare them with who was having issues or near the action or perceiving the action or feeling weird with what was going on in their emotions/hormones that day. We learn much this way, even to know what day you personally will have more encounters.


Geology/waterways/leylines (you can look up county/state geology maps online, waterways show up on Mapquest when you punch in the address of the site, as well as railroad tracks, and leylines can be determined by the use of divining rods)
Feng shui (nearby cemetery/clutter/darkness/odd dead end rooms/energy paths not getting a straight run, cul-du-sac places for energy)
Multiple death and trauma (use of building in the past, manner of death being not anticipated)
Generations of negative emotional content (troubled families and family members)
Infrasound/geomagnetic storms (Are these things at play?)

The humans within and their mental states/psychic abilities (what's up with the research team and the people who dwell in the building?)