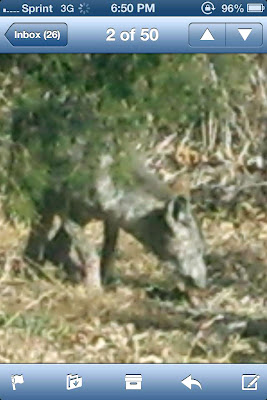 There have been a myriad of photos online of supposed chupacabras in the Continent US, southern region mostly. These bring to light a big discrepancy between the original chupacabra (Puerto Rico) and the one people are pointing out in the States.


It would help us a lot more in the discussion of chupacabra to come up with another name for the dog-like creatures being found in the American West versus the little demon-like bipedal described in Puerto Rico and called a chupacabra. Maybe we could call them "canine hybrids" or something like that. They are nothing like the reported chupacabra of Puerto Rico.

A family in Kansas shared some photos with me taken in 2009. The husband was looking out the window to the back yard. Behind their house there was an old wire fence with holes in it and behind that was a field that was overgrown with weeds. He saw in the corner of the fence a head looking through the hole in the fence. When he saw it, he thought it was a doe sitting or laying down looking in. Then it stood up and came thru the hole. He took these pictures (below) with a cell phone through a screen door. The family believed it came that close to the house because it smelled the food that was out by the fence (turkey bones and meat left over from Thanksgiving). As it came through the hole, it took two steps then hopped, take two steps then hopped.  The family reported it looked like several different animals all in one. The hop seemed almost marsupial. 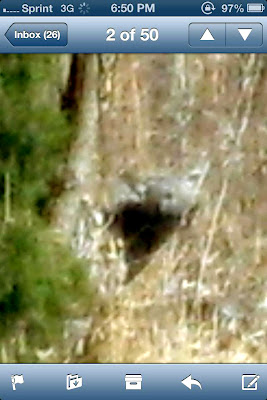 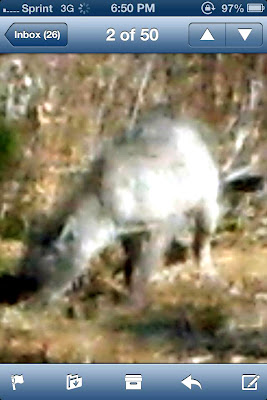 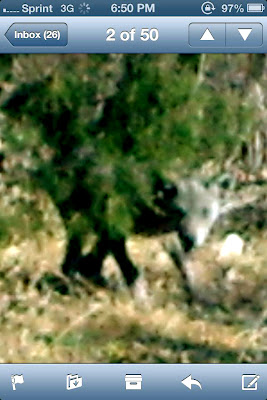 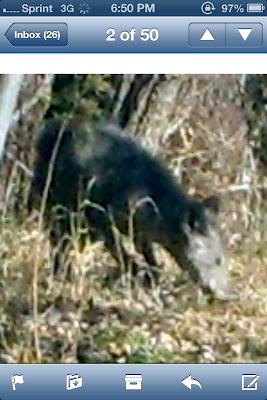 The chupacabra of original fame was reported in Puerto Rico, something vastly different than what is reported in the American West today. Those creatures walked on two legs, had spikes down their backs, long fangs, claws, and red eyes, according to some witnesses. 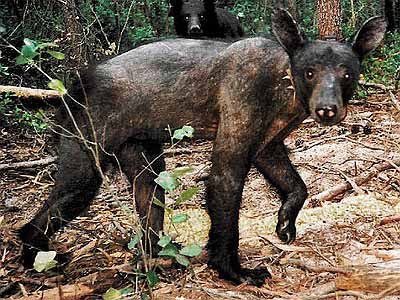 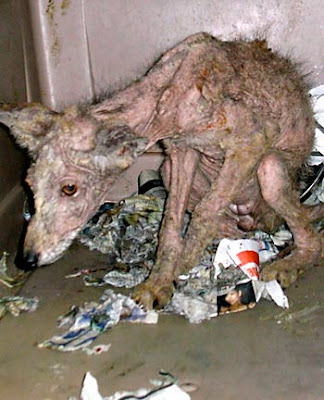 Does this mean that the 48 contiguous states have random cases of canines with mange that frighten people with their miserable appearance and their hairless ears and bodies? It's certainly possible.

If you look at picture #2 above, you can see its neck is quite wide and in picture #3, it's legs seem oddly sized and spread. It certainly could be a manged coyote or coyote/dog mix. People report this odd hopping like behavior as if the back legs are too short for the front legs, which is very hyena-like.  The snout is very odd, has no dip between the brow and snout, just one triangular shape.

Mange is a parasitic mite that causes the animal itching and hair loss. They scratch and get infections and more hair falls out. Over time, they can become wasted and quite miserable and scrawny.  If you look #3 and #5, you can see the front legs looks very pink where the dog would have chewed on his itchy flesh.

Are the Mainland Chuppies the real thing? They're not the ones that were originally reported in Puerto Rico, but a little investigation might note some interesting features to some of these, the proportions of their snout and body and their odd movements. It might even be that crossbred dog/coyote hybrids have weaker immune systems and less ability to deal with mite infestations.

Until we see one of these doing something extraordinary, we must assume they are creatures of the woods and of the Earth.  But, we might need to find a new name for the more odd ones that meet the criteria of a "mange rover" or whatever name we wish to give these odd breeds with peculiar attributes. I hope someone gets a hold of a body and does some examinations to find just what their origins are.