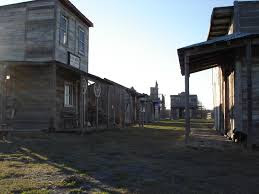 I used to doubt the possibility of mining ghost towns being haunted because of the simple wood construction of the quickly-built homes in boom towns. However, I have come to find that all these mining lands are very haunted by different levels of human habitation over the centuries. They act almost as a magnet to keep energies moving in and out of the fabric of our time and space.


The very nature of mining ghost towns would tend to produce a wide variety of the worst human emotions brought on by greed and thieving opportunity. 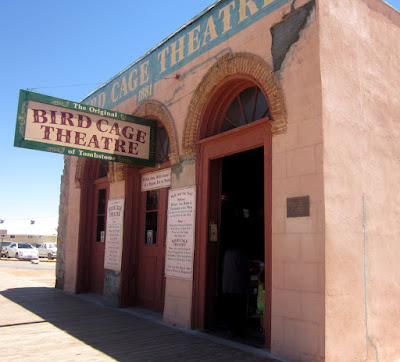 In the height of the silver boom, the Birdcage Theater in Tombstone Arizona saw gambling, thievery, jealousy, prostitution, drinking and the deaths of 26 people in that building.

Today, it stands as a shining example of a haunted vessel. The construction of the building doesn't seem to hold any particular interest for the typical haunting, but the tri-level design inside allows for a feng shui that would hold energy in a loop, like a lighthouse does. The very land it sits atop of has streaks of metals running through it.

Battlefield, prisons, hospitals, and mining towns seem to hold a history of very strong and painful emotions that also involve the body and the mind in torture and that very combination appears to leave a lasting effect on an environment. Agony seems to be a running theme among haunted locations. You don't really hear of a location with a happy history having issues.

Either the moment of spirit and body stress in a human, such as a tuberculosis patient, a battlefield soldier, or a psychiatric patient leaves a homing tag for the spirit to later attend that spot or it leaves an imprint that replays over time.

Arizona has many mining towns and much haunting activity in them today including Bisbee, Stanton, Globe, Tombstone, Oatman and others. Most mining towns are known to be haunted.

It's hard to decide whether the hard-living past of a ghost town is a factor in them being more haunted than other towns, or if their empty shell remains simply seem to be haunted by how quickly they were left behind, or if possibly the geology of the area and opened mines might have created a fantastic conduit for spirit activity.

There are all kinds of phenomenon found in mines and around them. Some of them quite exceptional. There was an episode of "Destination Truth" in which they entered mines in Chile and encountered odd lights and lots of other unusual happenings. They also ran into all kinds of odd activity in abandoned mining towns that were polluted and left behind in Chile. There are reports of being pushed, shoved, shadow figures, apparitions, voices, objects moving, and strange lights.

The Ukrainians have mining ghosts they call the Shubin. The Welsh speak of the Tommyknockers. It seems that miners are a superstitious lot and the question becomes, is it the stressful scary conditions they are working in, a sort of underworld, that makes them come up with a mythology to support their fears or are they truly encountering things within mines that make them wonder....


Even long after mines are shut down and people reenter to explore, they often run into odd shadows and eerie voices within. In fact, it is quite common.

If the mining towns sit upon the rock that works as some kind of conduit for past events or spirit activity, then imagine being inside the mines, surrounded by all that rock pressing down with the forces of the earth, the subtle energies within the earth exerting a force right back at them, and metals running through the rock.

Yes, mining ghost towns are haunted and so far we have yet to see them running out of activity up to over 100 years after being closed. It makes one wonder, how long do ghost circuits run?

Others, well, they are left in an isolated time bubble - it would take a visitor staying a while to discern what history remains.

Disappearance  A family driving through Nevada decides to take some snapshots at an out-of-the-way ghost town named Weaver, and horrible things start happening. Susan Dey, Harry Hamlin.
Chernobyl Diaries  Six tourists hire an extreme tour guide who takes them to the abandoned city Pripyat, the former home to the workers of the Chernobyl nuclear reactor. During their exploration, they soon discover they are not alone.
House of Wax  A group of unwitting teens are stranded near a strange wax museum and soon must fight to survive and keep from becoming the next exhibit.
Purgatory An outlaw band rides into a town that is actually Purgatory, between Heaven and Hell.
Silent Hill  A woman, Rose, goes in search for her adopted daughter within the confines of a strange, desolate town called Silent Hill.