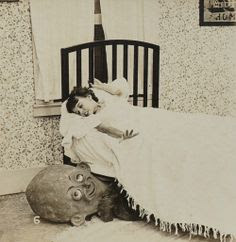 Chillbumps, Heebie Jeebies, Creepy Willies, whatever you called that scared mechanism as a kid, it effectively had our attention. How many of us pulled our toes back under the cover or a sheet over our heads when we felt we weren't alone at night? 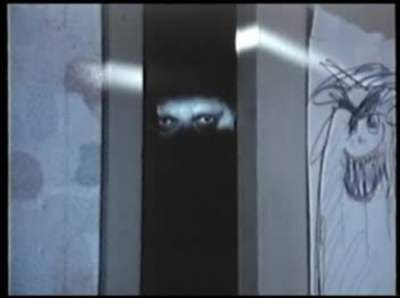 As kids, we had vivid imaginations, were susceptible to superstitions, urban legends, and rumors of bad things. The world was a huge mystery and logic wasn't established enough, so that a GI Joe doll could be as alive to us as that thing in the closet....

Let's recall some of those things were were told, legends that took hold, and popular rumors. 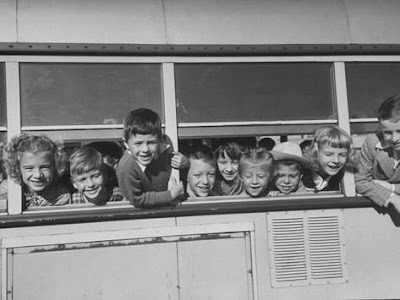 The big legend when I was a kid was the "don't put your head out the bus window" lecture. The bus driver stood up before us the first day of school. She hoisted herself up from the driver's seat and once we were in place ready to be shuttled to school, she admonished us "don't ever put your head or arm outside the bus window. A boy did that one year and his head came clean off when we passed by a sign." With that image in place, I did not so much as open the window on the bus.

It doesn't help that there is a case of a student putting her head out the window, hitting a tree and dying. (LINK)

Perhaps one of the most tense times as a kid was climbing into bed. Some of us didn't climb, we vaulted!  Something was under the bed. Whatever made its space beneath our box springs, we didn't want to see it or know its name. We just wanted to be sure your hands and feet stayed on the bed and didn't creep over the edge.

Here's a terrifying portrayal from the movie "Campfire Tales" (a great movie if you love urban legends). 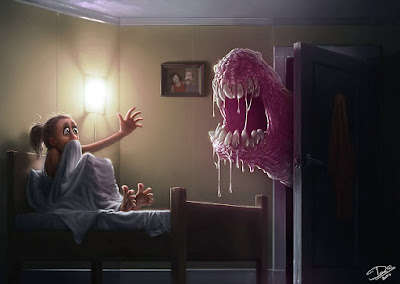 
One thing you did not want open when you slept as a kid, was the closet. There was definitely a monster in the closet that started rustling around while you were dosing off.

Even saying the words "Bloody Mary" terrified us as youths. Those brave enough to try the test were admired.

You stand before the mirror in semi darkness and call out to Bloody Mary three times "Bloody Mary, come to me." She is supposed to show herself in the mirror.

The Boogeyman was perhaps the greatest threat to children. Parents admonished that the Boogeyman would get them if they didn't do this or that. It was left to the child's imagination what the boogeyman was and what he would do to them.

In the movie "Halloween" they pondered if Michael Myers was the Boogeyman. Well, he met the criteria for terrorizing.

In the latter half of the 60s, a rumor went around that Paul McCartney from the Beatles band was dead from a car accident and replaced by a lookalike. This "Paul is Dead" rumor took hold. Excited preteens and teens listened to the albums, looking for clues that Paul was dead and thought by playing songs backwards they could hear them announce Paul's death. This made everyone look a little oddly at the radio and wonder. The hoax was revealed finally and everyone settled down, but many remember the summer of listening for clues. 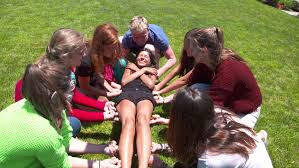 When we were bored as kids, the games we would play on sleepover night were endless including a most popular one thought to have originated during the Plague, "light as a feather, stiff as a board."

Directions: A girl lies flat. The others sit around her and put two fingers underneath her. The one sitting near the girl's head says something to the effect of, "she looks ill." Then, the others chime in, "she's getting sicker," "she's dying," "she's dead." Everyone begins to chant, "light as a feather, stiff as a board," and imagine the girl's body lifting. 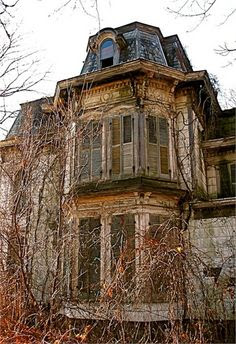 Every neighborhood has one of those, the neighbor who is creepy. Maybe they have odd habits of staying indoors all day and coming out at night, or the never use their front porch, or perhaps there were two people living there and now only one.... Speculation among bored kids abounds about what is up with the creepy house on the corner.

Here's a story I tell of my unusual neighbors - 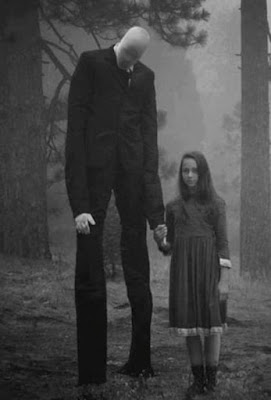 For a newer generation, tales of the Slender Man made the rounds. This tall rather feature-less man in a dark suit with long spindly limbs is said to hypnotize children to him. The legend was born online which is the new seat of urban legends these days, and sadly a couple girls committed a murder and blamed it on the Slender Man, making it even more of a legend that took hold.

It's impossible to go through your childhood without some unsettling fears and legends. These are only some of them. Many areas had their own local ones. Where I grew up, it was The Bunnyman Legend. Now, let's see if you can sleep tonight with the closet door open and your foot hanging off the bed....

Movies to bring back those memories