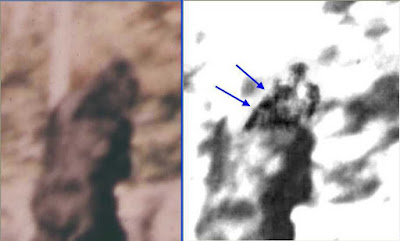 MK Davis did an amazing job of illuminating Patty's mane of hair from the Patterson Film. We can see a plait down her back and what looks like a smaller braid at the temple.

I take notes from speaking with many eyewitnesses who describe that Bigfoot hair among clans seems to be uniform. One habituator might report the ones on their property have Mohawk looking do's and another might tell of a Three Stooges' Moe bowl cut.
Pompadours, braids, and rastas have also been reported in various areas when describing Bigfoot hair. What is intriguing is the concept that clans choose a hairstyle for their people that identifies their group.

And this might have had an influence from the Native Americans.

LINK  When you think of an Indian, you usually imagine them wearing their hair in braids. This hair style was often the traditional style among Native American Indians. What most people don't know is that certain tribes had their own traditions when it came to hair. In the Quapaw Tribe, women who were married wore their hair down loose while single women wore their hair in braids. Often they would roll these braids in coils and fasten them behind each ear. These coiled braids would then be decorated to attract a mate.

In the Blackfoot Nation Tribe men were the ones in braids. Mean wore three braids often with a topknot or pompadour. Women word their hair loose or occasionally wore two thicker braids down the front. Plains Indian men wore the traditional two long braids often seen in movies. Meanwhile the women of the Plains Indian tribe cut their hair shorter than the men's hair.


It is interesting to note that Bigfoot very likely gathers some of its customs and styles from those they observe. It makes one wonder what they might do while observing our modern citizens in the countryside and farmlands? 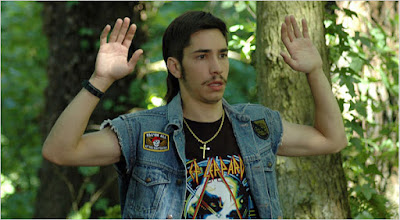