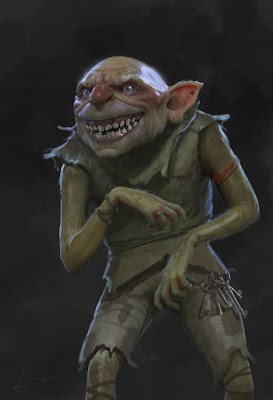 I often note in my research how local and native legends repeat themes, whether it's encountering giants or great floods. Another running theme among all cultures are a group of "wee ones" who are small, mischeivous and sometimes playful. Often times, these beings are called "goblins." And, often times people report seeing them today.

(WIKIPEDIA) A goblin is a monstrous creature from European folklore, first attested in stories from the Middle Ages. They are ascribed various and conflicting abilities, temperaments and appearances depending on the story and country of origin. They are almost always small and grotesque, mischievous or outright evil, and greedy, especially for gold and jewelry. They often have magical abilities similar to a fairy or demon. Similar creatures include brownies, dwarves, gnomes, imps, and kobolds.

Then, there was the "Hopkinsville Goblin" case -


The Kelly-Hopkinsville Encounter has often been referred to as the Hopkinsville Goblins. In 1955, near Kelly and Hopkinsville, Kentucky five adults and seven children arrived at the police station in Hopkinsville claiming small creatures from a spaceship attacked their farmhouse. They described the beings as two to four feet high, large pointed ears, claw-like hands, spindly limbs, and eyes that glowed yellow.

The case changed in the telling by the press and many believed it was an encounter with aliens, others believed they had encountered great horned owls. Some believed the family was making up an hysterical encounter influenced by the others.

The Pukwudgie is a Wampanoag Native American goblin-like being spoken of in legends. They were said to be 2-3 feet tall, large noses, fingers and ears, grey skin that glowed, and could appear and disappear at will. These beings, it was said, are best left alone. 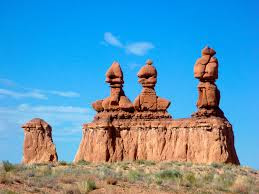 Goblin Valley State Park in Utah has many stone shapes that are likened to goblins. 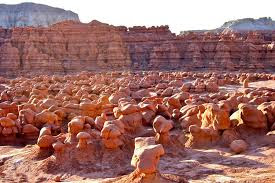 Still, today people believe they have had encounters with goblins and they are rather chilling in the telling, as well as on videos -