There are few crueler deserts than Death Valley, California. It is not a place anyone could fathom a Bigfoot setting up housekeeping, yet giants have been associated with this region for thousands of years in Native Legends and a reported find of giant remains in caves. Upon occasion, a bare print is found in the hard-packed desert floor that confuses the mind of the viewer. How is it possible?

In the book "Death Valley Men" by Bourke Lee told the supposedly true tale about a man who fell into a cavern when looking for mining prospects in Death Valley and realized he was in a keeping place of an ancient race of giants with amazing technology. He said he was able to light underground gas lights and move a huge stone wheelbarrow that was balanced so that it was easy to push. A hall of great warriors was found and an enormous Buddha-like gold statue.

The tale seemed extraordinary, but the Paiutes had legends of the Hav-Masuvs.

"’Have you ever seen a Hav-musuv?’

"’No, but we have many stories of them. There are reasons why one does not become too curious.’

"’Yes. These strange people have weapons. One is a small tube which stuns one with a prickly feeling like a rain of cactus needles. One cannot move for hours, and during this time the mysterious ones vanish up the cliffs. The other weapon is deadly. It is a long, silvery tube. When this is pointed at you, death follows immediately.’

"’But tell me about these people. What do they look like and how do they dress?’

"’They are a beautiful people. Their skin is a golden tint, and a head band holds back their long dark hair. They dress always in a white fine-spun garment which wraps around them and is draped upon one shoulder. Pale sandals are worn upon their feet...’

"His voice trailed away in a puff of smoke. The purple shadows rising up the walls of the Funerals splashed like the waves of the ghost lake. The old man seemed to have fallen into a sort of trance, but I had one more question.

"’Has any Paiute ever spoken to a Hav-musuv, or were the Paiutes here when the great rowing-ships first appeared?’

"For some moments I wondered if he had heard me. Yet as is our custom, I waited patiently for the answer. Again he went through the ritual of the smoke-breathing to the four directions, and then his soft voice continued:

"’Yes. Once in the not-so-distant-past, but yet many generations before the coming of the Spanish, a Paiute chief lost his bride by sudden death. In his great and overwhelming grief, he thought of the Hav-musuvs and their long tube-of-death. He wished to join her, so he bid farewell to his sorrowing people and set off to find the Hav-musuvs. None appeared until the chief began to climb the almost unscaleable Panamints. Then one of the men in white appeared suddenly before him with the long tube, and motioned him back. The chief made signs that he wished to die, and came on. The man in white made a long singing whistle and other Hav-musuvs appeared. They spoke together in a strange tongue and then regarded the chief thought- fully. Finally they made signs to him making him understand that they would take him with them.

"’Many weeks after his people had mourned him for dead, the Paiute chief came back to his camp. He had been in the giant underground valley of the Hav-musuvs, he said, where white lights which burn night and day and never go out, or need any fuel, lit an ancient city of marble beauty. There he learned the language and the history of the mysterious people, giving them in turn the language and legends of the Paiutes. He said that he would have liked to remain there forever in the peace and beauty of their life, but they bade him return and use his new knowledge for his people.’

The Paiutes also have a legend of the red-haired giants in Nevada, along the ancient lake area. This legend says that there were a giant people who were covered in red hair, who came to the Paiute's land along the great lake (Lake Lohontan) and they were cannibalistic. They ate their people and dug up new graves and ate the dead. The Paiutes drove them onto the lake where the giants lived on reed boats, but they came to the shores again and the Paiutes trick them into a cave filled with brush and set it afire. Interestingly, in 1915, guano farmers were in Lovelock Cave digging out bat guano when they came across and enormous amount of artifacts and the skeletons of giants with red hair. 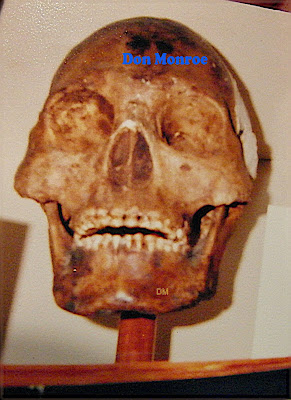 Photo by Don Monroe of giant skull that used to be housed in the basement at Humboldt Museum in Nevada, but was later removed.


There appears to be in legend, descriptions of a giant people in that region where there was once water, 10,000 or more years ago.

Today, people occasionally find prints and see things in Death Valley that reveals there might still be something unaccounted for out there in the sands -

The Mojave Desert in California is not a stranger to Bigfoot. There is the Yucca Man from The Twenty-Nine Palms area/Joshua Tree area.

And, there is one reported in Borrego Springs known as "Borrego Sandman." This is an area just west of the Salton Sea.

(LINK) These very dry areas with little vegetation, and almost no water supply would seem like the last place that a 6-t0-10-foot-tall animal that weighs upwards of 400 pounds, and not to mention is covered with thick fur, would want to call home, yet the sheer number of Bigfoot sightings in these areas are too numerous to ignore...

In the late 1960s reports of Bigfoot sightings in the desert towns of Lancaster and Palmdale reached a feverish pace that lasted well into the 1970s, then tapered off...

More bizarre are the stories that have surfaced from nearby Edwards Air Force Base, that is farther inland and farther from the forested areas near Los Angeles, of frequent intrusions by creatures that match the description of Bigfoot. As the story goes, Base Security is in possession of several surveillance video tapes that plainly show giant, up-right, apes trespassing in the numerous underground tunnels under the facility.

It's entirely possibly that a group of human family members were here on the continent before Homo sapiens arrived. Legends of Native People in the Americas all suggest that there were giants with a civilization here when their ancestors arrived and many encounters that did not end up well. A group outnumbered and driven out could have remained in their regions. Today, we see Bigfoot in the Ohio Valley/Applachian areas where mound cultures existed long ago. Where the huge waterways and lakes of the west once were, could still be adapted descendants. If Native People can live in a region, so could these giants.