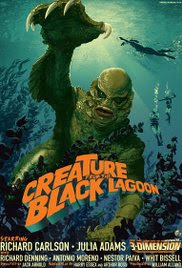 The 1950s are so beloved because, like the 1980s, they were a boom time for the country's economy, the middle class, and expansion and growth in America, not to mention fashion and the arts! With the pounding away at new stretches of highway, family car trip vacations, tourist attractions and more in a Nuclear Age, it seemed anything was possible. And the movies reflected a general sense of fear of irradiation and the "Commies" mixed with changing roles of females, as well as teenagers acquiring cars and freedoms. Let's have a look at the lineup of fantastic thrillers and science fiction that flooded the theaters in the very original 1950s -

You will often see running themes in the science fiction and thrillers of the 50s. Many showed a confusion about women's roles as if they were having a hard time giving up the money-grubbing, angry, bimbo themes and accepting the intelligence scientist concepts. Many of the smart (brunette always) women in roles of science in the movies weren't necessarily a scientist, but were his assistant.

With a population of teenagers now able to have their own cars, the drive-in theater became the social connection and the movies there involved scary themes for cuddling couples. Everything from monsters from other planets to werewolves were giving teens a good excuse to head to the drive-in on a date.

As well, thrillers had themes of the dangers of women going out on their own. Alfred Hitchcock brought us some wonders of suspense. Thrillers involving murder and greed took hold in the theaters, much to the delight of the 1950s crowds that wanted to be shocked and scared.


The Man From Planet X


Strangers on a Train

The Beast From 20,000 Fathoms
It Came From Outer Space
Invaders From Mars
Abbott and Costello Meet Dr Jekyll and Mr. Hyde
Abbot and Costello Go To Mars

1954
The Creature From the Black Lagoon
Rear Window
Dial M For Murder
20,000 Leagues Under the Sea
Godzilla
Them!

1955
Revenge of the Creature
This Island Earth
Tarantula