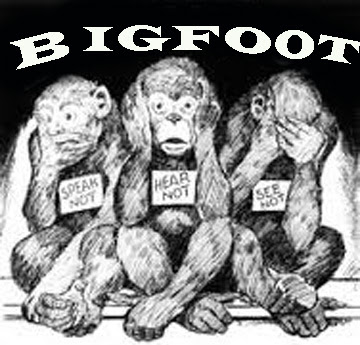 Those researching Bigfoot run into a common dilemma - the general public. There are a lot of people walking around not caring, not believing, not wanting to hear about the concept of "big ape men in the woods," as they tend to sum it up.


An important landmark for man to finally accept things they may not be ready for is to make them open their eyes and their minds and expose them to that which they do not want to deal with.

This is what happened during the Scopes Trial of the 1920s when a teacher was taken to trial for teaching evolutionary concepts. This set the stage for teaching science in schools for the most part. So, the trial wasn't so much about whether evolution is something one believes in, but that it is something one should know about if they wish to be exposed to both theological and scientific concepts. It is best to give all knowledge so that one can form a conclusion based on evidence.

(LINK) The Scopes Trial, formally known as The State of Tennessee v. John Thomas Scopes and commonly referred to as the Scopes Monkey Trial, was an American legal case in May 1925 in which a substitute high school teacher, John T. Scopes, was accused of violating Tennessee's Butler Act, which had made it unlawful to teach human evolution in any state-funded school. The trial was deliberately staged in order to attract publicity to the small town of Dayton, Tennessee, where it was held. Scopes was unsure whether he had ever actually taught evolution, but he purposely incriminated himself so that the case could have a defendant.

Scopes was found guilty and fined $100 ($1366 in 2016), but the verdict was overturned on a technicality. The trial served its purpose of drawing intense national publicity, as national reporters flocked to Dayton to cover the big-name lawyers who had agreed to represent each side. William Jennings Bryan, three-time presidential candidate, argued for the prosecution, while Clarence Darrow, the famed defense attorney, spoke for Scopes. The trial publicized the Fundamentalist–Modernist Controversy, which set Modernists, who said evolution was not inconsistent with religion, against Fundamentalists, who said the word of God as revealed in the Bible took priority over all human knowledge. The case was thus seen as both a theological contest and a trial on whether "modern science" should be taught in schools.

We had a mini example of science teaching us something we had never want to hear before - that through study of DNA, we found out we carry the DNA of Neanderthal, Denisovans, and another as of yet unidentified ancient man who mated with Homo sapiens. 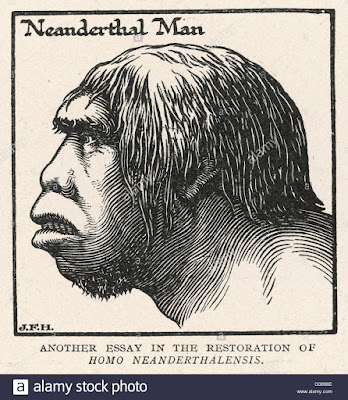 Most of us were raised with a sort of troglodyte
concept of Neanderthal as you can see in the vintage sketch above. We thought of them as "oogha - oogha" cave men and barbaric.

The truth is, they had over a hundred thousand years in Europe before we broke the borders of Africa and stumbled out into the big wide world. Their cranial capacity was larger than ours (1600 cc versus our 1300 cc).

After we finally accepted the DNA "science" that we carry their genes, it's interesting how adaptations of Neanderthal changed. We were even able to say they might have had technology ahead of ours. 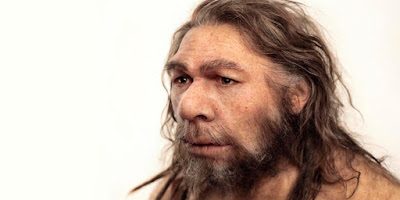 Here we are today dealing with a concept of a "big hairy ape in the woods." And over time and lots of witness descriptions, we have formed a much more reasonable concept of what the Bigfoot People look like compared to the hunched over ape versions of the 1950s. 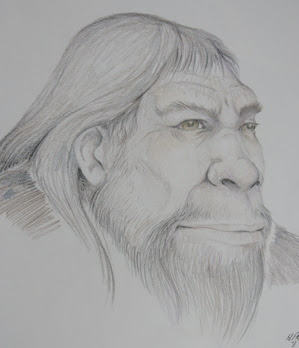 One has a very hard time proving evolution to those who do not wish to review the evidence, but the information is out there in schools and the public to peruse if one wishes.

This is the same for Bigfoot research. We have a very hard time proving it to people who do not wish to review the evidence. But, what we do have is witnesses, footprints, and encounters that have helped to take Bigfoot from the "damn dirty ape" category to a partner in the formation of humans on the earth.

The more we study the importance and repercussions of the Scopes trial, the more we come to understand that, while it did not PROVE evolution, it allowed the free flow of information and talk without ridicule in the process of accruing more science to clarify the "magical" process. There is no more gravely significantly "magical process" going on right now than sharing our planet with an elusive thought-long-gone cousin.

Speak Not.
See Not.
Hear Not.

This is what we face with the public in general. The concept of Bigfoot in our forests is unthinkable. They don't want to hear it, talk about it, or see it. But, sometimes blind eyes cling to what the think they know, afraid of what they might learn.