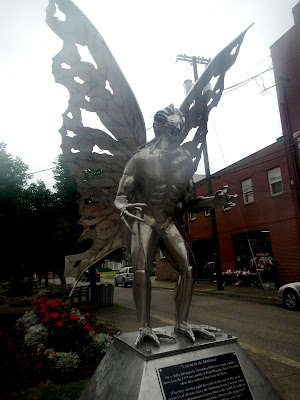 I trekked to Point Pleasant in 2013, fully expecting to be following the path of the legendary Mothman, but I ran into something I was not expecting.... 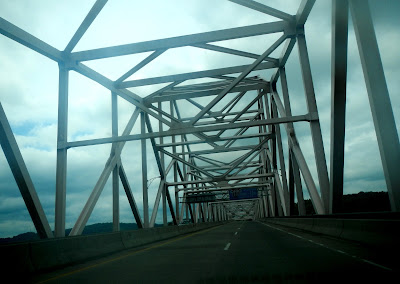 As my co-researcher/co-author and me were crossing the bridge into Point Pleasant, I had my camera going as I steered and she was filming too.

At the same moment crossing the bridge, both our cameras' batteries went dead. Now, mind you, the were new batteries and new charge. When we got to the end of the bridge, we pulled over in a parking lot and checked our cameras and they booted back up again. This had not occurred anywhere else on the 10-day trip, and it happened at the same exact second!

That had me wondering about other possibilities. Could Point Pleasant have those odd portal-type qualities where a lot of seemingly unrelated paranormal things were occurring in this most charming and lovely town?

Let's line up the high strangeness - 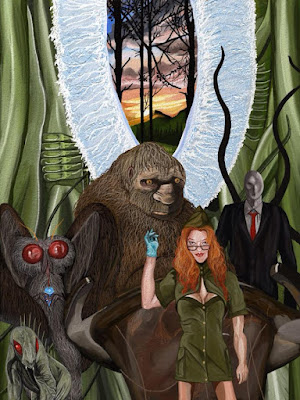 above- a beautiful piece of art by Thomas Finley portraying me showing the cryptids through the portal - mothman is on the left-hand side of the painting with the big red eyes.

In 1966 and 1967, the quite town of Point Pleasant, WV, in a most idyllic setting, had a slew of reports of some man-like large being with red glowing eyes and wings been seen by citizens.

Two couples out for a cruise near the TNT bunkers area, were chased by this being and supposedly raced away and escaped its threat. But, their encounter became the thing made of nightmares.

Around the time this quiet town was getting stirred up, the Silver Bridge collapsed, sending cars and citizens into the river. 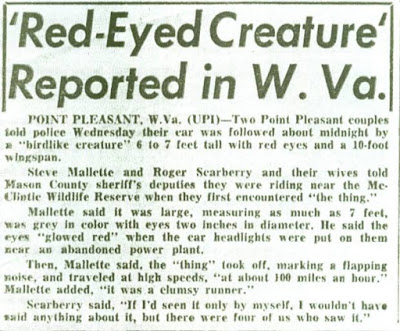 Stories written by Gray Barker and later John Keel in the 1975 book The Mothman Prophecies, tied the visitations of the mothman with prophetic foreknowledge of the bridge's collapse.

The popular movie, "The Mothman Prophecies," offered many fictionalized imaginings and chills of delight, but the original contact with the couples in the car on the TNT bunker roadway forever landed the Mothman into our top favorite American cryptids. 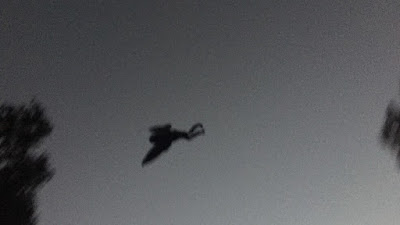 (LINK)  A man driving along State Route 2 in Point Pleasant said he snapped these pictures (above) of a creature jumping from tree to tree. Many locals in Point Pleasant believe it resembles the legendary Mothman — a red-eyed creature many believe is a bad omen. 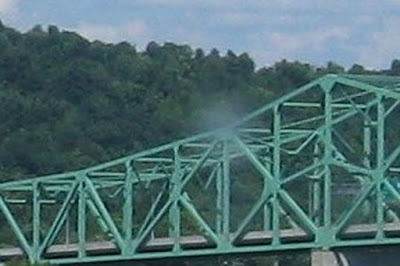 Link - oddity on a photo of the bridge

Below is another picture showing a supposed mothman on the bridge. 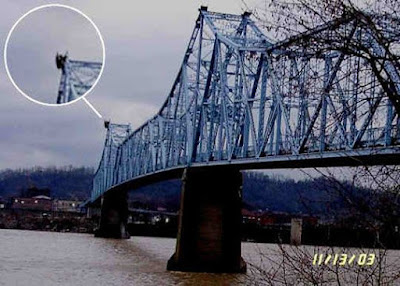 The White Things and Sheepsquatch?

(LINK) “I ran across everything from something that was described as a huge stingray that was white, to an owl-type thing. The archetypal White Thing is shaped sort of like a badger with a bushy tail and ranges in size from a large dog to slightly larger than a person,” says McCoy. “There was a headless monster in Grafton which was white, but had seal-like skin. And then, of course, there’s the notorious Sheepsquatch.”

I admit, I had an aunt when I was a kid. She lived in a trailer up on a rough patch of mountains in WV. She used to leave food out near the wood line for the "white bear man," as she called him. "He looks like a bear and walks like a man."

Sheepsquatch came into popular reporting in the 1990s. He is tall like a Sasquatch, shaggy, walking on two legs, but reportedly has horns. This is intriguing if we review some of the popular Native drawings on petroglyphs around the country. 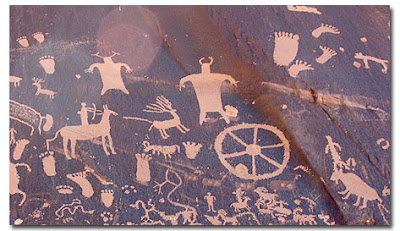 Newspaper Rock, Utah - horned huge men, and regular men with no horns together on the rock, along with regular small footprints and large 6-toed prints. It seems the Native people were showing the animals among them, but these big gentleman man not have been anthropomorphs, but another "person" among the wildlife.

(LINK) I was driving back to Mason from Point Pleasant.  As I was crossing this small bridge I seen this big light around these trees and thought when did they put a street light there. As i got closer, I noticed it was above the trees when I was right under it I stopped in the middle of the highway looking at it.  After a few seconds, I looked in front of me and other people were stopped. It was dark out by now and the object gave off so much light it illuminated the ground, the field, the cars in front of me. I could see the driver in the van stopped in the middle of the road in front of me, they were looking at it too. It was somewhat stationary, if not slowly movie across the sky. It was kinda low to the ground as I could tell it had 3 lights that moved around its main white body; they were green, blue and red. I could not stay and observe too long as I was heading home to get ready for work and I was in the middle of the road, but it was and has been the strangest thing I've ever seen.


Like a lot of older settled towns in Appalachia, Point Pleasant has its fair share of ghosts. 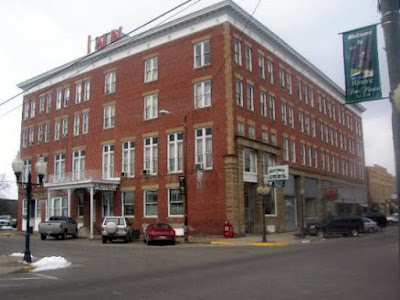 Some have reported the Lowe Hotel to be haunted. (LINK) Stayed at the Lowe Hotel summer of 2014. Requested room 316. It was me, my daughter, and her boyfriend. During the day we explored and took random pictures. We didn't think we got anything till I zoomed in and got quite a few apparitions. There were many faces, woman in white, and a child. Also did mag flash light and got response. Needless to say, we slept with lights on! We took the pictures back to show at hotel in November and got a tour back to room 316. We took one picture and got a child's face outline of Indian face and orb on top of a lamp. Crazy!! Can't wait to go back this summer! Got voice recorder for Christmas and can't wait to see what we get.

Sometimes the best way to see if a region has a potential for haunting (besides a tragic history and great geology) is to look into the Native Legends. Many of them repeat ongoing issues with the land and its "other" inhabitants.

Cornstalk Curse (LINK) The dying words of the great chief known as "Cornstalk" was -  “I was the border man’s friend. Many times I have saved him and his people from harm. I never warred with you, but only to protect our wigwams and lands. I refused to join your paleface enemies with the red coats. I came to the fort as your friend and you murdered me. You have murdered by my side, my young son.... For this, may the curse of the Great Spirit rest upon this land. May it be blighted by nature. May it even be blighted in its hopes. May the strength of its peoples be paralyzed by the stain of our blood.”

What might be going on in Point Pleasant? Well, my guess would be an amazing combination. You have a town cradled in the hills with amazing geology, but also on the confluence of two important historic rivers (Ohio River and Kanawha River) in the middle of the ancient mound culture that build entire empires on confluences. There is a lingering intensity involved with churning waters, historic confluences, mineral-rich lands, Native People, and the even more ancient mound culture. Layer upon layer in an ideal setting of physical attributes and you have - another weirdness portal!