Denisovans Skulls Found? Does This Lead to Today's Bigfoot? 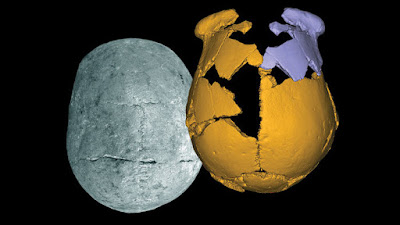 Two ancient skulls were uncovered in China is thought to possibly be that of Denisovans, a man that existed in the time of Neanderthal and only recently discovered in a finger bone and molar in Siberia. Their DNA has shown up in people of the world from Himalayas to aborigines and Melanesians, and Inuit, among others. The skulls were dated to 105,000 to 125,000 years ago! Homo sapiens were still playing around in Africa and not even yet contemplating leaving to discover more world for another 40,000 years.

(LINK) The new skulls “definitely” fit what you’d expect from a Denisovan, adds paleoanthropologist María Martinón-Torres of the University College London—“something with an Asian flavor but closely related to Neandertals.” But because the investigators have not extracted DNA from the skulls, “the possibility remains a speculation.”

The skull fragments were found with some beautiful quartz tools.

In the site in Siberia where Denisovans were first discovered, they also found beautifully carved bracelets and a fine needle that dates back 50,000 years. 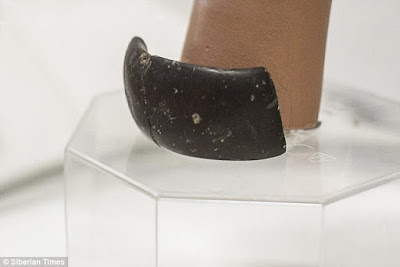 One cranium has a huge brain volume of 1800 cubic centimeters (we are 1300 cubic centimeters)—on the upper end for both Neandertals and moderns—plus a Neandertal-like hollow in a bone on the back of its skull. Both cra­nia have prominent brow ridges and inner ear bones that resemble those of Neander­tals but are distinct from our own species, Homo sapiens.

(Paleoanthropologist Rick Potts of the Smithsonian Na­tional Museum of Natural History in Washington, D.C. notes) ... a broad cranial base where the skull sits atop the spinal column and a low, flat plateau along the top of the skull.

They are awaiting DNA results.

I have openly discussed on the blog many times my theory that Yowie, Yeti, Bigfoot, Yeren, Alma, might all be descendants of this race still living in remote reaches of the world (these regions have Denisovans DNA traces in the natives). Denisovans were adapted to high elevations and cold climates (genes for tolerating cold and living at high elevations without blood thinning, extraordinary conservancy of energy to exert less energy to do more than us) from their historic evolution and highly intelligent enough to stay hidden. Ancient "giant" cultures reported would be the descendants living in civilizations until Homo sapiens drove them off and killed many off. (LINK to my latest post on it)

Where did Bigfoot get their strength and how do they eat enough calories?

Today's sherpa have a trace of Denisovans DNA. Those traces give them genes to keep their blood thin at high elevations, to have better adaptation lung-wise for the elevations and studies show they can carry enormous packs and their metabolism only boosts a slight bit compared to us that would be off the charts. The need for calories is lessened, the tolerance for cold is in the genes, as well, as shown in Inuits. Denisovans were adapted for high elevations, extreme climates, and don't need as much calories because they burn less calories exercising and are capable of carrying more. With that in mind, if as I believe that Bigfoot and other Bigfoot-like beings are descendants of Denisovans, then even though they are quite powerful, their metabolism does not burn through calories like ours does in order to do these tasks. These are most efficient machines.

Ironically, Bigfoot beings are seen in the Himalayas where sherpas carry Denisovans DNA, the South Pacific/aborigines where Yowie is, Mountainous parts of China were Yeren are seen, Siberia where Alma are seen, and into North America where coastal indians showed the skull shape of Denisovans influence, as do the Inuits.

Everywhere Denisovans DNA shows up today, a full-blooded one might still exist....

**Tomorrow's post "The Cursed Lake at the Heart of Death, Bigfoot, and UFO Sightings"**