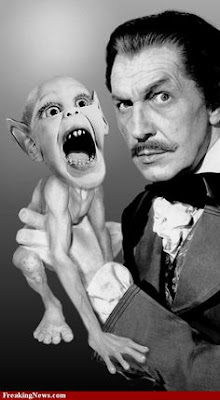 Batboy was that wonderful tabloid creation that gained lots of fans and had us enchanted with the possibilities of what could happen if a hybridized man-beast could exist. Batboy may have been a short-lived popular subject, but what if Batboy were possible? 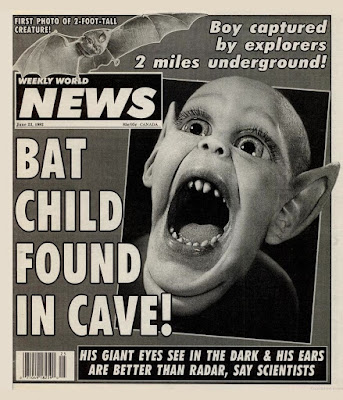 The first question we have to ask is - have we hybridized a human and an animal? Are chimeras possible? 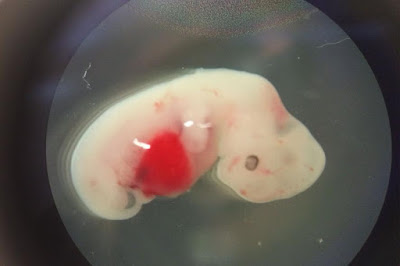 This pig embryo was injected with human cells very early in its development and made it to four weeks. (LINK)

The primary purpose of such research is for organ transplant. Already we use porcine (pig) valves in heart operations on humans, but to be able to make bio-compatible organs for a person would solve many issues with shortages on donated parts.

Of course, the question arises if such a thing is ethical, but it also makes one wonder - can we make an ideal human being by giving man a trait from an animal in a chimera experiment?

The list of reasons for chimera experiments abound and, ethics aside, Batboy would only happen if a human and a bat could be combined.

Oh, forget the movie "The Fly." We're not talking about exchanging limbs. 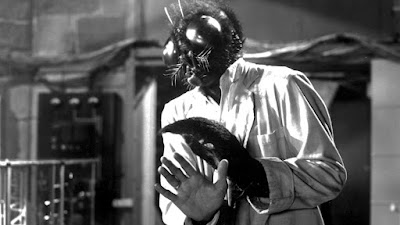 So far, 20 experiments have been happening in America with sheep and pigs with human cells. None so far have made it to term. It seems nature knows best. (LINK)

One interesting finding, however, was 62-day-old fetus of a pig in which the human cells reversed a congenital eye problem.

But, what if an animal turned out too human-like? That would make a very hard ethical decision for anyone wanting to harvest parts.

Let's say that Batboy was possible - we could make a chimera that was human/bat. Why would we want want do this?


Although we have fairly good vision, echolocation might help an elite group of soldiers to make their way around in the dark.

Bats are already mammals, so there is one less barrier for us to leap. In fact, bats are the only mammals that can fly. Now, we're a step closer to Batboy being possible.

Some bats can handle colder climates by altering their metabolic system, slowing their respiration, lowering their body temperature and heart rate. Should a human have bat qualities, this might be an ideal one to have in order to survive anywhere.

Bats eat fruits and bugs. But, imagine Batboy's needs. He might be able to ingest a wider variety of foods like humans do. Now, his hunting ground is everywhere.

Batboy, if he existed, likely would not live alone but in a dense colony of others like himself. They would fly together, work together, mate in large swarms, and share the same hibernating-like location. Batboy chimeras would do well in the cities where a good deal of them could be efficiently work together and live together in a small area.

(LINK) An anticoagulant in vampire bat saliva has been adapted for use in increasing blood flow in patients with stroke or heart disease. This is interesting, as a human chimera that could live at high altitudes without blood clotting issues would give man more range to exist on the earth. This also might counter man's tendency toward strokes and heart attacks.

There are a myriad of qualities we might want to share with a bat, including the ability to fly. That being said, our chimera would have to be small like Batboy just to be feasible in flight.

Then, of course, there is the most famous Bat-Man of all - Batman! 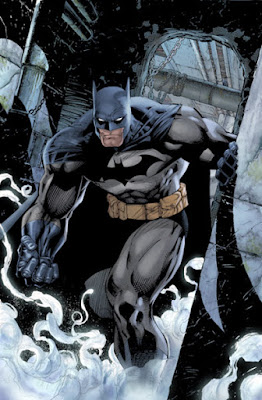 Splice: (2009) Genetic engineers Clive Nicoli and Elsa Kast hope to achieve fame by successfully splicing together the DNA of different animals to create new hybrid animals for medical use.

An American Werewolf in London: (1981) Two American college students on a walking tour of Britain are attacked by a werewolf that none of the locals will admit exists.

Night of the Bloody Apes: (1969) A mad scientist (Dr. Krellman) attempts to cure his son's leukemia by doing the first 'ape-to-human' heart transplant. He decides to put a gorilla's heart into the lad and orders his flunky to "prepare the gorilla!". There is actual footage of a graphic open heart surgery inserted in the ape operation scenes. This of course causes the boy to turn into a big stinky man-ape. He becomes deformed and mutated, as he sprouts excessive facial hair and takes on the characteristics of the organ's donor, who immediately goes on a bloody rampage, tearing clothes off women and faces off men.

Swamp Thing: (1982) After a violent incident with a special chemical, a research scientist is turned into a swamp plant monster.

The Thing From Another World: (1951) Scientists and American Air Force officials fend off a blood-thirsty alien organism while at a remote arctic outpost.

Creature From The Black Lagoon:  (1954) A strange prehistoric beast lurks in the depths of the Amazonian jungle. A group of scientists try to capture the animal and bring it back to civilization for study.

The Beast Within: (1982) In the beginning of the movie you see a woman getting raped by a man-creature of some sort. The movie takes place years later when the child that was a result of that rape is on the rampage looking for a girl to rape to start the process all over again.

I admit, I've had a wee crush on the Batboy since I was a young one reading tabloid headlines in the grocery store line. 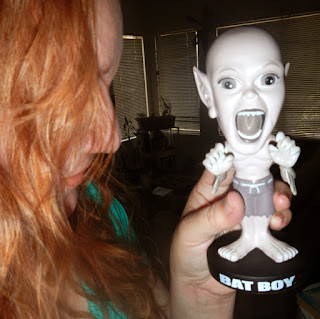