The Beast of Bladenboro 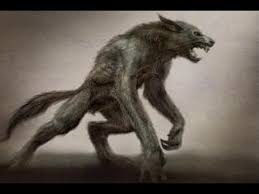 The legend starts in the winter of 1953/1954 when a large amount of livestock and pets were mutilated in Bladenboro, North Carolina.

The majority of the creatures killed were dogs and their heads were crushed or they were decapitated.

"My dogs put up a good fight. There was blood all over the porch, big puddles of it. And there was a pool of saliva on the porch. It killed one dog at 10:30 and left it lying there. My dad wrapped the dog up in a blanket. That thing came back and got that dog and nobody's seen the dog since. At 1:30 in the morning, it came back and killed the other dog and took it off. We found it three days later in a hedgerow. The top of one of the dogs heads was torn off and its body was crushed and wet, like it had been in that thing's mouth. The other dog's lower jaw was torn off."

A goat and some cows also were killed by similar powerful means with skulls smashed.

A resident, Malcolm Frank, reported seeing the animal crossing the street. He described it as "about four and a half feet long, bushy, and resembling either a bear or a panther."

Anxious locals began the hunt for the killer. Hundreds of people and hunters from all around joined the search. One hunter brought back a dead bobcat. The mayor declared the search over and the killer annihilated, but many had to wonder how such a small cat could crush skulls of dogs and livestock. Some speculated possibly a cougar or mountain lion.


It seemed as if the terror and countless dead dogs and other animals were a thing of history. Decades went by without incident.

Then, in 2003, similar attacks began again in a 150-mile radius of Bladeboro. Even powerful breeds of dog were killed by horrendous means and strange tracks were found on the ground.

To this day, the beast is a mystery. Will it come back? No one knows - 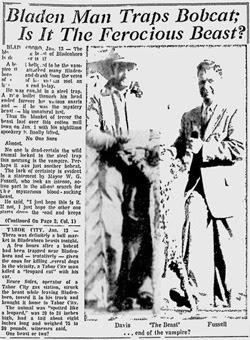