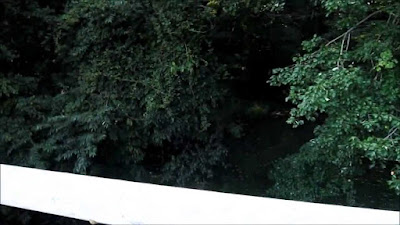 In Salem County, New Jersey in Woodstown a phenomenon is witnessed on Slabtown Road.

(LINK) It is said that if you stand on the side of this bridge facing route 40, in Woodstown, NJ, you have to walk over the bridge into the woods. Following the street, you will hear footsteps on either side of you walking in the grass. They follow closely for awhile and then stop. When the footsteps stop lights begin to shine. Almost like mini stars, all over. They can be seen on the road, in the trees, leaves, foliage, everywhere. You can even touch them, and they won't go away.
These lights are said to show in the trees, grass and roadway, but not floating around in the air.
The legend takes on more character when many witnesses also report a gray figure at the end of the bridge. Some say she was a local witch that lived in an abandoned house nearby. Others report seeing a mist, as well. A gray mist, as well as dark figures have been reported.
The area appears to be full of paranormal occurrences. In fact, Salem County saw a good deal of Civil War activity and forts. Mass burials occurred of the enemy on these northern lands.
Nearly every state has mysterious lights in the woods, such as Brown Mountain in North Carolina; Marfa, Texas; Joplin, Missouri; and Miami, Oklahoma, among many others.
Interesting, the footsteps paralleling one and the mysterious lights are both reported in Bigfoot active areas. When local legends paint this as a ghost encounter, people who experience it tend to think they experienced a ghost, when it might have been something altogether different. It's the same phenomenon when you go to a museum and you look at an item and then you read what its significance is and then look at it again. You now see it in the context of a story. It's hard to ever see it any other way after it has been explained to you.

Once again, it pays for folks to look at the constellation of activities in an area, the geology, historic events, and the Native legends to see if there might be something more than just ghostly occurring and to figure out if these noises, figures, mists, and strange lights are all part of a recipe that allows paranormal events to come through and act out or if they are side effects of the process of the unexplained occurring (like a sonic boom when breaking the speed of sound).