Signs of Prior Civilizations in Antarctica? 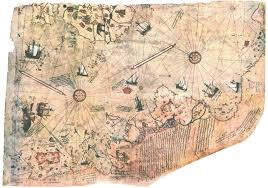 We contemplate what Antarctica would be like if it were exposed and bare. Was there ever a civilization there? Well, at one time it was believed to be, like all the other continents, part of a giant continent referred to as Pangaea. Millions of years ago, it broke off into the land masses we now recognize around the world. So, what was the climate like when Antarctica was perhaps midway to its final location? It surely had the same dinosaurs and large creatures that we note on all the continents today, but for a time did it have man living upon it, perhaps before it became densely iced over? 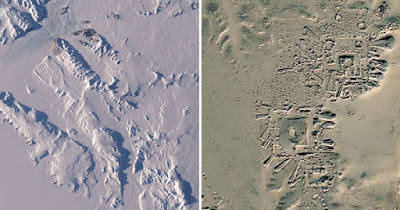 (LINK) Did NASA images of Antarctica reveal a potential ancient civilization buried under 2.3 km of ice? A look at the images on the right certainly do not look natural, but almost like the base of pyramids. 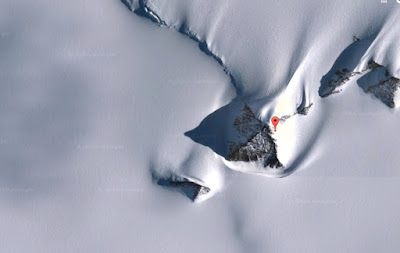 (LINK) The case for a lost civilization took a rather "Blair Witch Project" turn as rumor had it that a team from supposed Atlantis TV had a crew that went to Antarctica and went missing in 2002, but not before leaving film evidence of the lost civilization. The rumor elaborates that the US Navy SEALs got involved and there is a cover up of a city that is being dug up 2 miles down. And, the film that was taken is supposedly missing, although the production company believes the government is holding it. (LINK)