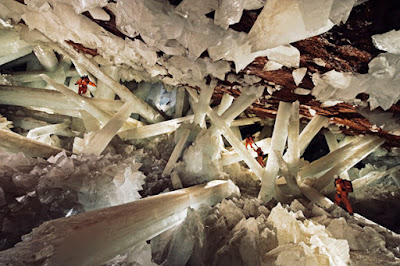 In 2000, two brothers were drilling in the lead and silver rich Naica Mine one thousand feet down when the found a cavern and enormous crystals. Since that time, the Naica Crystal Cave has become one of the most fascinating caves in the entire world. It is like something out of "Journey to the Center of the Earth," with temperatures and conditions similar to those found in the movie. This was only one amazing cave find for this magical country. 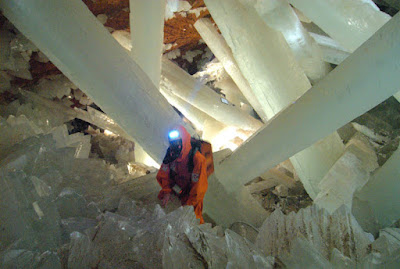 (LINK) The main chamber contains giant selenite crystals (gypsum, CaSO4·2 H2O), some of the largest natural crystals ever found. The cave's largest crystal found to date is 12 m (39 ft) in length, 4 m (13 ft) in diameter and 55 tons in weight. The cave is extremely hot, with air temperatures reaching up to 58 °C (136 °F) with 90 to 99 percent humidity. The cave is relatively unexplored due to these factors. Without proper protection, people can only endure approximately ten minutes of exposure at a time. In the 1930s, an American teen was on vacation with her family in Mexico in the Copper Canyon region (another mining area), she came across an abandoned mining tunnel where she found a full human skeleton lying on its back. Even more disturbing, there was an arm bone sticking out of the ground, fingers wrapped around the arm bone of the full skeleton. She dug up the dirt to find what was below only to discover another skeleton that was smaller with a most misshapen skull. (LINK)

Since that time, the skull has been examined extensively and referred to as "Starchild," by the odd features. An entire Starchild Institute was designed to handle the skull, learn about its origins and even perform DNA testing. The skull was dated at 900 years old. Not only the anomalies and misshapen features have caught researchers' attention, but the very fibers of the skull appear to be strangely woven in a way that makes it exceedingly strong. 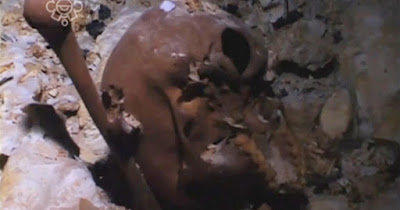 Naia is what they refer to a skull found in an underwater cave in the Yucatan area. 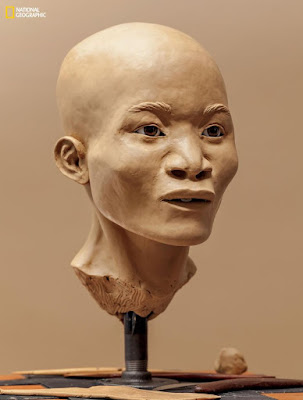 They found her DNA to match that of today's Native Americans, placing their immigation to the New World at least 13,000 years ago during the ice age. 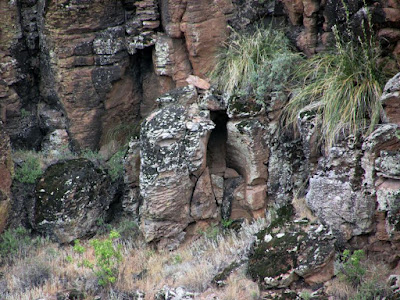 Not the actual cave

(LINK) The Washington Post Jun 22, 1925; Large Skulls at the Ica Museum in Mexico.
Click and drag photo to resize. Mexico City, June 21---Giant human skeletons…measuring from 10 to 12 feet have been discovered by prospecting miners in a new gold and silver district in the mountains of the State of Chihuahua, according to members of the party who arrived here today. The miners say they found a group of these skeletons intact in a hidden cave. The feet measured from 18 to 20 inches. (A male with a U.S shoe size of 13 has approximately a 12 inch foot). The government anthropology department plans to send a commission to investigate the discovery.  It is felt that the find may clear up the present doubtful origin of the Chihuahua Indians. The discovery was made near the village of Sisoguichie. The skeletons were in a sitting position, the shoulders and arms bending forward and resting on the upraised knees. In this position they measured,from the top of the skull to the ground, from five to six feet.

(LINK)  Carl Lumholtz was a Norwegian explorer who travelled to Australia and Mexico. He spent many years in Mexico between 1890 and 1910, during which he spent a full year with the Tarahumara people. His book, Unknown Mexico is the source of the Giant's myth quoted below:

"GIANTS
On the heights once lived giants. They were as big as pine-trees and had heads as big as bowlders [sic]. They taught the Tarahumares how to plant corn, by cutting down trees and burning them, but they ate children.

A woman bore a giant in a cave, which was situated very high up on the side of a valley. She died, because the child was so large, and he was taken care of by his grandmother. Once when she was asleep, she turned over and crushed him.
From Wasivori (near Cusarare) came giants to Nararachic to ask alms. Tesvino [Note: a kind of beer made from corn] they liked very much. They worked very fast, and the Tarahumares put them to hoe and weed the corn, and gave them food and tesvino. But the giants were fierce, and ravished the women while the latter were under the influence of the Moon; therefore the Tarahumares got very angry and they mixed a decoction made from the chilicote-tree with the corn that they gave the giants to eat, and the giants died.[2]

The paragraph before the one quoted above mentions a "Deluge", which filled the world with water. It, like most Flood myths around the World (and also in the Americas) must surely reflect the deep impression caused by rising sea levels and glacial dam ruptures with the consequent flooding caused by climate change at the end of the last Glacial Period some 8 - 10 kya. 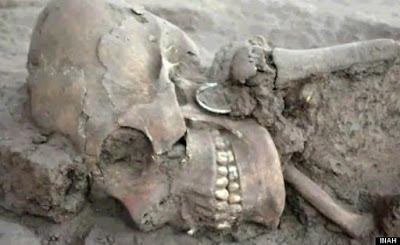 Elongated skulls are a common trait found by Native people around the world and is created by molding the skull of the infant by binding or cradle boarding as it is formed. There are some, however, that lead us to wonder - who were these Native people hoping to imitate? These skeletons found in the Sonora region of Mexico have elongated skulls, but looking at the features of teeth/jaw/nasal bone/eye sockets, they do not seem like anyone we have ever seen - elongation aside.


(LINK) Found in the village of Onavas, these unearthed elongated skull skeletons (13 of them) shocked and amazed.

Zapoteca Region of Mexico has a cave called Liyobaa. There are four temples above ground and four levels are below ground. The cave forks off the underground and people fear it has no end.  Many beileve it leads to hell and the "cavern of death." It is said the entrance was covered over with rubble to hide the entrance to hell.

(LINK) As they advanced into the mountain, a putrid, dank air assailed their nostrils, serpents retreated from the light behind the shadows of the pillars in the distance.

They continued into the depths at a distance of about 40 meters when suddenly a strong cold wind began to blow about them. Still striving to continue, as their torches were extinguished rapidly, they took flight when all became dark, not only for the danger of the serpents, but also from strange sounds they could not place, but which were not being made by the members of their own party. Using the rope and the light of the torch one of the guards held in the doorway, out of the strong wind, the entire party rapidly retreated from this terrifying region.

When all the company had swiftly retreated to the ante-chamber of "Hell," they rapidly replaced the large stone slab door. After this the head prelate gave orders to fill in all the underground chambers and seal off and erase all signs of the stairs to them, thus eradicating for all time this entrance to the Caves.

From the potential crater that is the Yucatan Peninsula to the mining mountains and arid deserts of Mexico, this enchanted land proves over and over again that it is rich in a history that we know so little about. Hopefully, more and more secrets are unearthed to help us understand the land of America in ancient times.