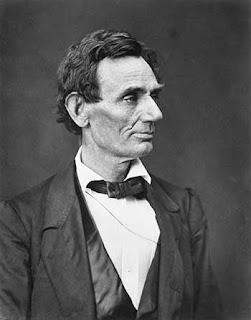 (From Wikipedia) President Theodore Roosevelt, Herbert Hoover and Harry Truman have all claimed to have heard unexplained knockings on their bedroom doors. What made them think it was Lincoln is unknown. Calvin Coolidge's wife reported seeing on several occasions the ghost of Lincoln standing with his hands clasped behind his back, at a window in the Oval Office, staring out in deep contemplation toward the bloody battlefields across the Potomac. Carl Sandburg, Lincoln's biographer, said he did not see the ghost but "strongly felt his presence" when he stood at this same window during a tour of the White House. Eleanor Roosevelt often sensed someone watching her in the former Lincoln bedroom. Winston Churchill said he stepped out of the bath to the adjoining bedroom and saw Lincoln standing neare the fireplace. Lincoln's ghost made many apparitions during the Franklin D. Roosevelt administration. Roosevelt was (coincidentally like Lincoln) president during war time. Maureen Reagan (President Ronald Reagan’s daughter) said she had seen ghost several times in Lincoln’s bedroom. The Reagan’s dog apparently would bark at the door but not enter. Lyndon Johnson supposedly spoke to the ghost of Lincoln, asking his advice. Senator McCarthy proclaimed that he entered Lincoln’s old office and a bust of the president flew across the room and nearly hit him.
The Roosevelt presidency saw the most activity and many conjecture that it was because he was a president during a wartime. Queen Wilhemina of the Netherlands visited during Roosevelt’s presidency and she was awakened by a knock at the door to find President Lincoln there. Why do you suppose he showed himself for some and not for others? Was he a harbinger of some message to beware or was this a matter of just good timing, she was alert enough to hear it and answered?

When I did my study of 50 haunted places, the White House was not a strong contender because it lacked a lot of traumatic history within its walls and the geology was weak. The building’s construction is promising. The thing that might outweigh all other factors is the symbolism of the White House. If a ghost of an average Joe can haunt his home because it was his beloved sanctuary, then surely an assassinated president could linger in a place he felt very protective of and very proud of.

The first person to report a sighting of Lincoln’s ghost in the White House was Grace Coolidge, the first lady from 1923 to 1929, who believed that she saw him looking out the window of the Oval Office.

During a state visit to the U.S. in 1942, Queen Wilhelmina of the Netherlands reportedly opened her bedroom door at around midnight, in response to a knock, and saw Lincoln’s ghostly figure. She was so frightened that she fainted, according to a 1973 New York Times article on paranormal happenings at the White House.

First Lady Eleanor Roosevelt’s maid, Mary Eban, reportedly looked into a room and then fled “terribly wrought up” after seeing Lincoln sitting on a bed, pulling on his boots, according to the Times article.
While staying at the White House in the 1940s, British Prime Minister Winston Churchill—who disliked sleeping in the Lincoln Bedroom—emerged naked from a bathtub and walked into an adjoining room. There, he supposedly ran right into Lincoln, who was leaning on the mantle above the fireplace. They looked each other in the face, to Churchill’s embarrassment, and Lincoln abruptly vanished, according to an account in Mark Nesbitt’s book Civil War Ghost Trails: Stories from America’s Most Haunted Battlefields.

Clergyman Norman Vincent Peale didn’t actually see Lincoln’s ghost himself, but he claimed that a prominent actor, whom he declined to name, had told him that he’d awakened during a White House stay to hear Lincoln’s voice pleading for help. The actor sat up to see “the lanky form of Lincoln prostrate on the floor in prayer, arms outstretched, with fingers digging into the carpet.”

President Reagan’s daughter Maureen recounted that she occasionally had seen Lincoln’s ghost—“an aura, sometimes red, sometimes orange” during nighttime stays at the White House, as had her husband, Dennis Revell.
Should we give more weight to the impressive list of witnesses above? Well, here is a bit of proof that may show that Lincoln might have been a man more determined and more sensitive to haunting the White House. This is what he told a dear friend one time of a precognitive dream:

Lincoln’s life would appear to be quite intuitive and serendipitous and perhaps that carried over into his passing. Many people note connections between Lincoln and Kennedy. At this site they listed them out:

Both had previously been members of Congress.

John Wilkes Booth shot Lincoln in a theater and fled to barn; Lee Harvey Oswald, Kennedy's accused killer, shot from a schoolbook warehouse and then fled to a movie theater. Both assassins were killed before they could be brought to trial. 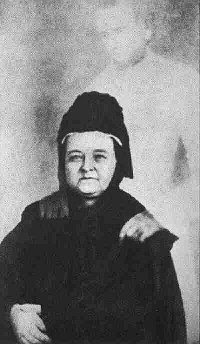 Mrs. Lincoln, it would appear, believed that her husband followed her after his death. William Mumler was known as a ghost photographer. Mary Lincoln was a bit of a spiritualist, having suffered the loss of her son and seeking answers after the death of her husband, as well. Mary Todd Lincoln posed for a photo by him and he reported he didn't know who she was when she sat and he got a photograph of her with a spirit behind her, one that strikingly looked like Lincoln. He was taken to task publicly as a phony. His career was eventually ruined, but Mrs. Lincoln continued to believe the photo genuine.