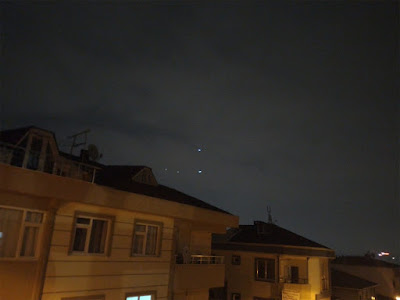 Citizens in Turkey Sunday night were shaken awake and frightened by blasts that went off, and UFOs in the sky. Denver and Texas had reports of similar lights, as well.

Hashtag #ufoattacktoturkey began on Twitter and spread rapidly. Some say that the tweets were being blocked on Twitter from public view. The hashtag was hard to find and photos posted were missing. Some think it's a government coverup. Some call it government projects or misinterpreted lights or hoax.

This is the kind of event that will take time to sort through as more and more people share photos and videos.

I will continue to follow this unusual event on here, should new information be released.