*This is a guest post by researcher, David Claerr. David has posted on here several times some very interesting posts! Be sure and check them out in the search bar on the right. His links are below*

In a remote region of the Lava Badlands of Idaho, an intrepid researcher and his assistant were was working their way deep into a lava-tube cave system The lava tube formed a narrow, twisting crawlspace, with obstacles of rock and debris that made progress painfully difficult. The passage barely afforded room for an average man to crawl through.

But at what appeared to be the end of the cave, and after squeezing through some stalactites that were crowded, the two researchers made a discovery of the skeletal remains of a large bird-like creature, about the size of an ostrich. Some of the desiccated remnants of cartilage and tendons remained attached to the bone and dehydrated. There appeared to be no feathers of any kind in the lava tube. They photographed the carcass from several angles*. Below is a picture of the carcass in its entirety. (Note that is no head or feet on this specimen.)

Identification of the carcass from photographs has apparently proved difficult, even for ornithologists at the university level. (see end of post where their responses are listed for all to see).

Some tentatively identified the remains variously as ostrich, emu or even trumpeter swan!  Many others dismissed responding all together.

But let's examine the following comparisons that I have made from side-by side photos of the skeletal remains of these birds:

Several years later, the same researcher returned to the lava cave with two other researchers to document the find and retrieve tissue samples for analysis. In a strange paradoxical twist, it appeared that another similar carcass was found in a different location of the tube! The newer find was in a similar state of desiccation, with the skin and muscle mostly absent. But the new specimen had the feet attached- and the foot had only two toes. 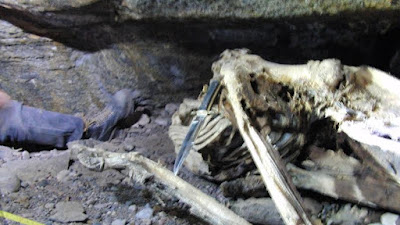 Tissue samples, consisting of a sequence of neck vertebrae and the trachea (or “windpipe” , as a common term) were retrieved (from prior find at teh end of the cave) and are currently pending further analysis; possibly DNA typing.

So, now for some additional analysis and speculation. Obviously we have two different specimens, because the first carcass did not have feet attached. As a disclaimer of sorts, it is worth noting that there are ostrich farms in the same general region as the Lava Badlands, although it is difficult to fathom how a domesticated ostrich could have escaped and wandered into this remote and inhospitable badlands, the terrain of which resembles the surface of the moon in some places. It is possible that a large predator could have dragged an already stripped ostrich kill into the cave system as stored provisions, to nibble off the remaining tissues in the colder months. This idea then begs the question: what type of being, carnivorous or omnivorous is capable of doing so? Perhaps a bear, cougar or a Sasquatch would have the strength and/or inclination. This scenario may fit for the second carcass.

But the first carcass appears to have a different anatomical configuration. Often caves preserve organic remains for hundreds of thousands of years if the setting is dry and cold. The lava-tube caves, formed perhaps about 15,000 years ago, fit this dry/cold criteria. Paleontologists and archaeologists often find remains of animals (and humanoids) dating from the present to the far distant past, in various stages of preservation or fossilization, in the same type of caves. If the first carcass was considerably more ancient, what could it possibly be?

One of the reasons that this topic interested me is that during my travels in the American Southwest, I have heard stories from Native Americans about sightings of creatures that resembled (as the varying descriptions go) giant “roadrunner” birds, mini-tyranosauruses , or feathered raptor-dinosaurs. These stories usually include that these creatures are very swift runners, hunting in packs. Most sightings are in the early mornings. The older Native Americans tended to describe the creatures with the “Giant Roadrunner” analogy, perhaps since they had less exposure to the media presentations on dinosaur-related topics or because that description is a more accurate eye-witness account.

Granted, now we enter the gray areas of speculation. In the more recent geological past, going back as far as the last Ice Age about 10,000 years ago, among the many species of megafauna in North America were giant, flightless carnivorous birds. (Indeed there are many stories in folklore and legend from peoples all around the world of encounters with these giants, often involving an epic struggle with the hero of the tale.)

Skeletal remains of ancient creatures are actually very rare. But there are several specimens of a fairly well-known genus of large predatory birds. Some of the mostly complete remains date as recently as 1.8 million years ago. This would make those flightless raptors contemporary with early humans. And even today, there is a smaller species of bird (the 80 cm-tall seriema) that is the closest known relative of the ancient raptors. So let us perform some more comparative anatomical analysis with illustrations and photographs. (The illustrations are by the author.) The most complete reconstructions of the ancient flightless raptors are depicted below: 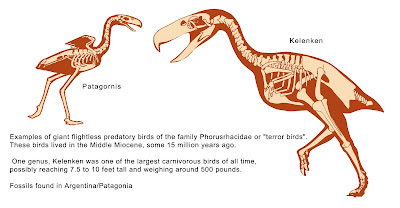 The two ancient raptors in the illustration above are considerably older than the original “Chickosaurus” specimen, which would presumably be, at the oldest about 15,000 years. But note the strikingly close anatomical configuration between the smaller Patagornis (ostrich-sized) and the Chickosaurus.

Could it be possible that a flightless, carnivorous raptor-bird roamed the America West as recently as the last Ice Age? Could they be descendants of the more ancient Patagornis? Could these birds still roam the remote regions of the American Southwest, as related in many Native Americans tales?

Perhaps any or all of these possibilities could be true. There are many “living fossils” extant today, such as the well-known horseshoe crab, the coelacanth (a primitive fish), crocodiles and many insects such as the fig wasp, which have remained in the same anatomical state for millions of years.

If there was such a raptor alive and well during the last Ice Age, what would it look like? 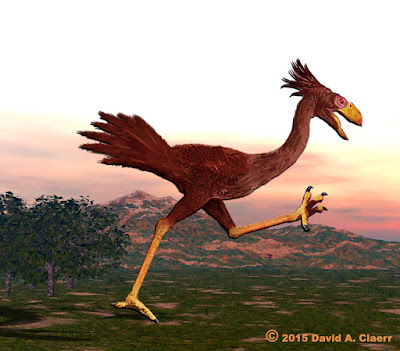 It is important to note that there are no remains yet recovered of the original Chickosaurus, which was apparently found in a more remote area of the cave, or at the very least another location altogether, than the second specimen. So, until we have some specimen samples of the original discovery's remains, the nature of the original carcass will continue to be a perplexing mystery. Was the “Chickosaurus” actually a Terror Bird?

- HERE ARE REPLIES FROM UNIVERSITIES AND MUSEUMS THUS FAR -

FAIL! - Idaho Museum of Natural History/ISU -
Our paleontologists identifies it as a trumpeter swan.

(Note from take another look above at trumpeters swan's delicate wing bones, how about the leg bones compared to the substantial bones of chickosaurus, not to mention the rib cage differences - did their paleontologist actually look at this???)

FAIL! - Cornell Lab of Ornithology - So far I’ve received a deafening silence from both the curator of the Cornell Museum of Vertebrates, and from another staff member who is usually all about bone-sleuthing. I checked in with the former this morning and he said nothing occurred to him at first glance, but that he would take another look. (No response after)

FAIL! - Ecology and Evolutionary Biology at University of Connecticut - I’m sorry but I have no real knowledge of skeleton identification. I’d suggest contacting someone at a museum with a major collection as they are likely to have the relevant expertize. (Look at the dept this came from)

SOME DIALOGUE/FAILED ANSWER - Burke Museum, Washington - That is a pretty interesting find! My guess is that it was brought into the cave by a non-human predator or scavenger. But I’m copying my ornithology colleagues here who will know more than me, and maybe can also ID the bird...That is a very large bird. Not many options other than a swan.

Sharon Day: I would also like to add that the location of the original find a the end of the lava tube was a 4-hour trek, some of it belly crawling in tight spaces and squeezing between stalactites. This large creature could not have gone through these locations belly crawling with two legs and in the pitch dark, or even fitting between the stalactites. In fact, the researchers realized there was no easy way to get the carcass out of there but to break it into parts to get it out, and so they left it for a later expedition, taking only the neck which is in my possession as I seek to get it identified. 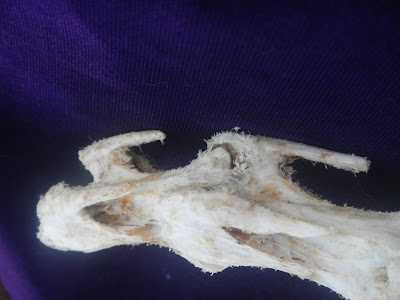 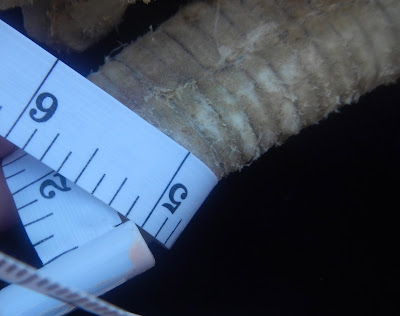 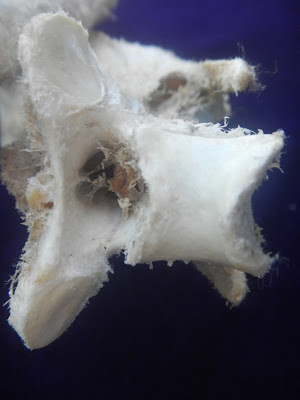 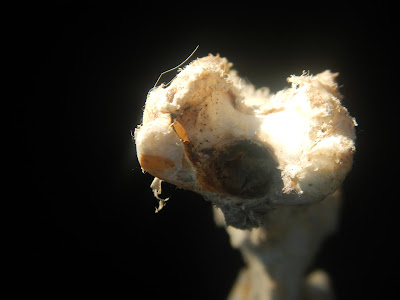