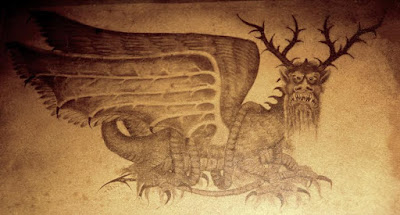 The Native People of America have an amazingly rich culture of legends. Some of them explain physical features in the land and others report ongoing strife between the tribes, but the ones that give the most shivers are the legends of creatures that create absolute terror. 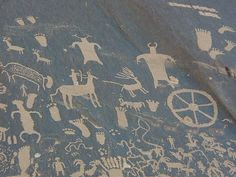 The Algonquian/Wabanaki tribes had a legend that was similar to many heard throughout all the Native People around the globe - cannibalistic giants!

The Chenook (plural of Chenoo) were said to be from the icy north, giants who ate people. This legendary creature was said to once be human but through dark magic became a cannibalistic giant. Interestingly the Paiutes, when describing the red-haired giants they dealt with who cannibalistic, said that they seemed human but they had lost their humanity.

An ice lump in their belly is said to keep them entrapped in their horrible form and if one can make them vomit it up, they become human again.

Here is a LINK to one of the legends. 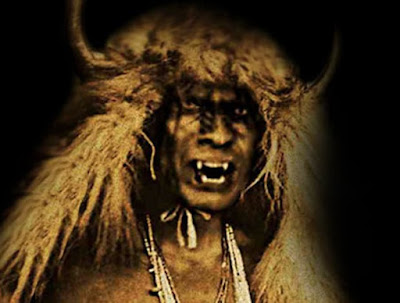 Skinwalkers are especially sinister as they involved those who practice dark arts. This witch can turn himself into any animal he wishes. This is a legend commonly spoken of among the Navajo tribe. They are said to have been medicine men who rose to a high level, but decided to use dark energy instead of good.

Because they wear the skin of the animal they become, it is said to be bad luck and taboo to use their pelts to wear.

Once the identity of the skinwalker is uncovered, if their name is exposed, the witch will die. 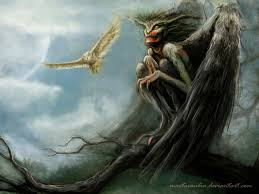 Owls have been signs of death and bad omens for Native People. It is no wonder there are legends to support that anxiety.


"Before the tribes lived peaceably in this country, before the last creation, there were certain people who ate Indians whenever they could get them. They preferred and hunted children, as better eating. These people, the Tah-tah kle' -ah, were taller and larger than the common human. They ate every bad thing known such as frogs, lizards, snakes, and other things that Indians do not eat. They talked the Indian language, and in that way might fool the Indians. There were five of them, all sisters. But at the last creation they came up only in California. Two were seen there. They were women, tall big, women, who lived in a cave." (LINK)

This legend reflects what the Paiutes said of the red-haired giants, that they came from the California area and the description of them being owl people would make sense, given that they seemed to do much of their work at night. Relating them to caves also relates them to the red-haired giants legends. Interestingly, one thing I have studied about Bigfoot for many years is their tendency to spend hours a day in practice of animal sounds and human voices. Are the two related? Well, tall people of the past, tall people of the present. But, as we are not at all like our Neanderthal and Homo erectus past as far as our civilized quality, so too are the Bigfoot far progressed past their origins. 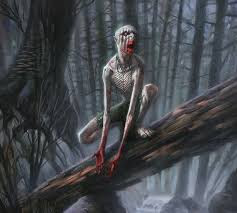 The cannibal dwarves are perhaps one of the creepiest legends. Sure, we know of people-eating giants, but what about little ones? Think of the movies"Don't Be Afraid of the Dark" and "Trilogy of Terror" and you realize wee ones are scary.

The Arapaho and Cheyenne speak of these little cannibalistic dwarves. The Arapaho describe them as having superhuman strength. They are the size of children, dark-skinned, and extremely dangerous. Some say they can turn invisible, making them even more dangerous!

Are these little beings feasible? Well, some reports have said the little people were found mummified in the west and buried in Tennessee with attributes that made it seem quite feasible they were cannibalistic. The "Hobbit" people were found in Indonesia. It would seem our history may not have just had giants, but also wee folk who were rather aggressive, as well. Two archaics of different stature living among modern man who had "civilized" his ways and tempered it out by breeding among many kinds of man, would cause some serious battles between civilized and "noncivilized" ways.

The nature of the beast remains, however. Man has not really gotten rid of his warring ways, he's just not built to be carnivorous any longer. Perhaps it was bred out of us by traveling the world and breeding with a variety of man and evolving omnivorous ways or perhaps if one believes in the doctrines in the Bible, God realized cannibals did not make good citizens. 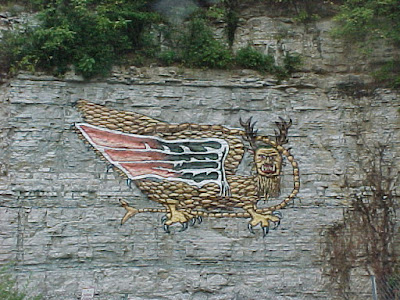 The legend of the Piasa birds seems to support the concept of a thunderbird or pterosaur still here in the time of Mastodons when ancestors of the Native People were around the area of rivers in the confluence of the Illinois and Mississippi rivers. The Native People say that there was a man-eating bird of the sky back then.

A large glyph was painted with their representation of this legendary creature. Oddly, in the early 1800s a man investigating and sketching it made it popularly known, but sadly the glyph was ruined and repainted in several different places and times. At one point, someone said they had found a cave filled with bones, so many they were up to his knees. It was thought that it was the lair of the Piasa. The cave went missing during mining excursions in the hills.

(LINK) Out of the Western sky came a gigantic flying monster. Its body was much the size and shape of a horse; long, white fangs stabbed upward from the protruding lower jaw and flames leaped from its nostrils; two white, deer-like horns angled wickedly from its head. Its huge wings pounded the air with such force the trees bent; its stubby legs held dagger-like talons and its spiked tail wound around the grotesque body three times.

Native legends might seem extraordinary, but if we examine religious texts around the world, there is truly no difference in life lessons or exceptional claims. It behooves us to look at the reporting of a people who were trying to warn of encounters with things in the past that taught them many strengths and adaptability. It is a glimpse into our ability to evolve as a people, wiser, more educated, and prepared for anything.