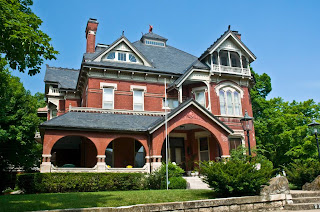 This uber awesome and creepy mansion is in Atchison, Kansas. It was built by B.P. Waggener in the late 1800s. He was a local politician. There are legends associated with it that Waggener sold his soul to the devil and for that, he put gargoyles on the home. Gargoyles have long been a symbol of protection. The house is believed to be jinxed because the owner tried to remove a gargoyle and fell to his death.

(Movie above: 1972 “Gargoyles” Made-For-TV fun and totally campy and creepy one of my cult fav’s)


There’s a lot of mythical creatures from minotaurs to fairies to gryphons, but my favorite of all time is the gargoyle. It started with the 1972 movie I caught on TV late night when I was a kid. It moved on to fixating on the Washington National Cathedral that has 100 gargoyles upon it. It was the only thing I was excited to see while in the city. My siblings wanted to go to the Washington Monument or Lincoln Memorial, Smithsonian or zoo. Not me. I wanted to walk around and stare at the Cathedral’s guardians. 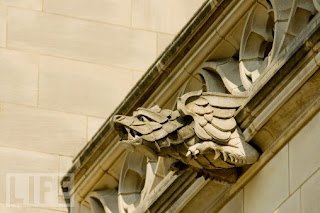 Interestingly, I found this out about the cathedral: Every Saturday, the Cathedral hosts The Gargoyle’s Den, where kids aged 6-12 can get a better understanding of Cathedral’s construction with a hands-on arts and crafts program. Kids can try their hand at carving a real stone gargoyle and even make one out of modeling clay to take home. They can learn about and build arches, mosaics as well as having a chance to try their hand at making a stained-glass window. Apparently, they got wise to kid’s fascination with these creatures. 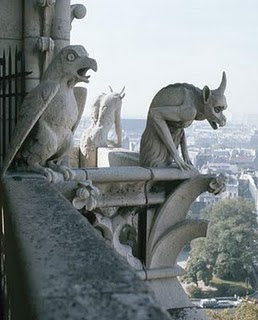 I like the idea of a building guardian. The lore behind gargoyles has undergone a lot of dilution over the centuries and its origins remain vague, but here’s what we think we know: Their origins are believed to be Ancient Greece, Egypt, and Rome and were originally used as waterspouts to drain water away from buildings. They were named for the gurgling sound they made as water passed through them. They were found on many cathedrals and other architecture. They went away for many centuries and then reappeared as a popular craze during the Victorian era. These ugly “demons” were believed to scare away evil spirits and protect buildings.

It’s almost impossible at Halloween time for me to pass by a Gargoyle statue without wanting to bring it home. I can’t even open up the Design Toscano catalog anymore. When I did my house with medieval castle themed items, I went to town with all the gargoyle stuff. Jeez, I like Gargoyles so much that even guys wearing Gargoyle masks at Halloween fascinate me. It’s a horrible affliction. I think it’s something about the grizzly face and the power, as well as the position as a protector.

Perhaps it's a "Beauty and the Beast" sort of appreciation for this frightening visage that has to me become endearing. 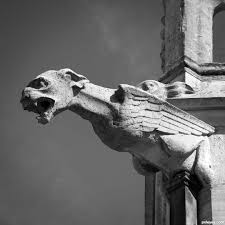 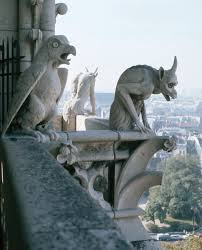 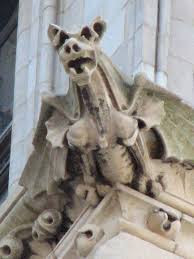 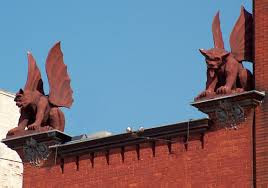 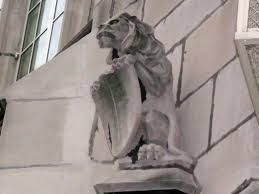 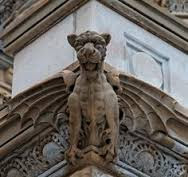 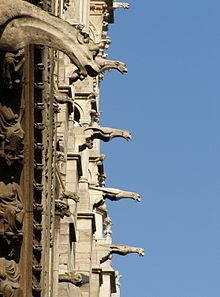 As an interesting craft, I took a plastic wall hanging relief of a gargoyle and lined it with saran wrap and filled it with plaster of paris. 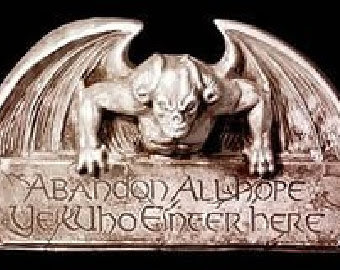 While it was setting, I placed a nail into the plaster and when it was dry, I painted it, broke off the arms and made it look chipped and ancient.  I stuck them by the nail into the seams of the cinderblock wall in the backyard for a Halloween party decor. 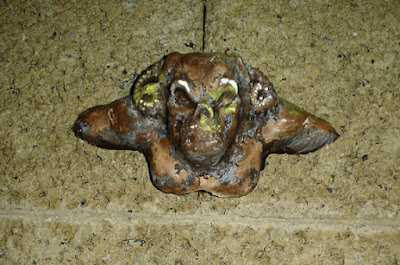 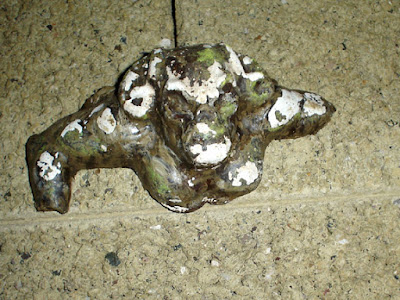 I used some copper paint and dabbed on some greens for lichens. I put down some wax first so that patches of it I could pull off the wax to expose bare plaster to make it look older. Finally, I took black paint mixed with water, brushed over it and rubbed it off, so it remained in cracks for aging. No one has more gargoyles than Design Toscano