My Feelings About the Patterson Film 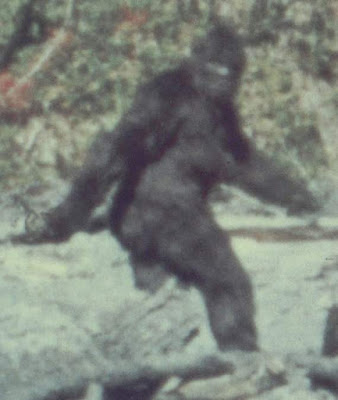 I begin my personal take on the film by saying that most of my life, I assumed what everyone else assumed from the film and from the popular 1960s/70s take on Bigfoot, that there was some form of gorilla in our woods.

From my own experience, I realized that Bigfoot was in the human family, not the ape family and that it was time I looked at the Patterson film again. I had not really looked at it until it was breezed by the TV screen as a small kid and a clip shown on a couple 70s documentaries.

I had always dismissed it because it was so extraordinary that someone looking for one, got to film one and one that was strolling, not running in horror. So, I pulled the clear stabilized and clarified footage worked on diligently by MK Davis, and I decided to view it by itself, not in any context, except a visual of a being walking across a creek bed.


What I saw was what I myself had witnessed in the mid 80s in the Sierras, a human stride by someone who is meant to walk on two feet and quite adept at it. I also noted something very odd that startled me when I saw one in the wild; the body proportions were a bit off compared to us.

What I hear in accounts from many encounters is that Bigfoot has three options when we enter the woods and they encounter us when they aren't expecting it:

1. They stand stalk still or drop like a weight to lie flat on the ground. By not moving, they become one with the forest and we disregard them as light and dark are absorbed in their hair-covered bodies.

2. They run like a terrified deer at a fast rate of speed through brush so that we hear them, but we don't know what kind of animal we just encountered.

3.  They are caught and we see them eye to eye and when that happens, they walk off calmly and without a show of fear or desperation. I hear this one quite often from those who came right up to one. You think they would bolt, but they don't. Sometimes, acting as if it's perfectly normal and moving on is best, especially if you fear someone might feel threatened and shoot them or chase after them. They simply act like "so what?" and move on.

So Patty's jaunt through the creek bed makes plenty of sense when you realize she came onto these men with eye contact and no doubt with guns.

Why do I call it the Patterson film?

I look at it this way - there are no heroes in the filming of Patty. We don't congratulate other photographers of events, like Zapruder filming the Kennedy assignation.

To make heroes out of people who were in the right place at the right time is the oddest thing. I will never understand that.

This, to me, is the Patterson film. I make a differentiation when I don't include the hired help that was witnessing it, but the man who was filming it.

I do not hold hero worship and only a guarded caution at elevating anyone related to the encounter. I appreciate the clear view of an anatomically correct being, with even bits of uneven hair distribution and amazing muscle flexing with body proportions that don't match ours. I will be forever thankful that this bit of the film (not the entire uncut film) was allowed to go public.

There are more questions than answers made by this film.