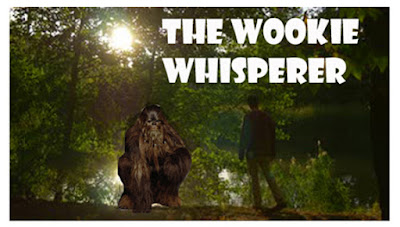 (This is installment #1 of a real-life Bigfoot habituation situation in the Midwest and the man who has learned to coexist in a most playful and remarkable way).

Other Installments:
#1 Home (Not) Alone


After the Tootsie pop incident in the driveway and estimating Little Andy's size at 6 feet tall just four years ago, Dave assumed the proportions were similar to Homo sapiens in growth. That, he believed would put Little Andy at early adolescence at his present day 8 feet height. Other males appeared to be up to 12-foot range in adulthood.

If his cautious choice of Tootsie Pop flavors wasn't enough, Dave found that Little Andy's obvious love of his dogs made him a good boy in his book. He was being gentle and meant well and the dogs seemed to have no issues with his presence, even went to greet him.

Little Andy was also a curious ferret of a Wookie.

He began to take things around the property, usually from the deck or garage. One time, it was a lighter, another time a crystal Dave found in the creek when he was prospecting. He also took a rusty machete, a metal file for sharpening, and a hatchet. Dave wasn't altogether sure of what else the kid might have stolen, but it had become a real interesting feature of living there, seeing just what the boy deemed worth keeping.

Dave brought in a roommate so he wasn't there alone, rambling about the property and the home. Ralph adjusted to life there, but had never had contact with the Tall Ones and wasn't sure what he thought of living with the Wookies, but with a little time and observation, he realized they posed no threat. And, upon occasion, their antics caused chuckles.

Little Andy had no qualms about hiding under the deck, perhaps thinking no one realized he was there. Folding up an 8-foot tall hairy man, even under the tall deck, was an awkward task, no doubt.

One time the roommate, Ralph, let the dogs out and went onto the deck to look out at the property as the dogs did their business in the yard. The coon hound came over to the deck and leaned against it. Then, Ralph spied two black fingers reach through the lattice and pet the dog. It reinforced the hunch the men had that Little Andy was hiding down there. Ralph marveled at the unsettling feeling of knowing that the Bigfoot stood right below him. Of all the imagined scenarios of moving to a remote home in the Midwest, he figured there would be hard work and lots of communion with nature, he just never imagined it would be this kind of nature.

And the hairy kid had a lot more mischief in mind than stealing items and hiding under the deck to pet the pups.

One evening while watching TV, Dave was startled by a loud boom from the basement. The dogs began barking wildly.

"Hush! Hush!" He tried to calm them down, grabbing up his shotgun and exiting the front door to see what was happening.

Dave went around to the basement door that had been broken open. The door was a Z-bar door and was also propped shut with a 2x10 that Dave had kicked to seal it tight and keep the bugs outside. Even the frame was dislodged.

Dave shook his head and looked around, but Little Andy was one fast scamp for such a tall boy.

Dave set the gun aside and got to work on the door. And it wasn't the only time Andy blasted the basement door open.

Then, there was the morning the kitchen door knob had been bent so badly that Dave had to remove the knob to let the dogs out. He was none too pleased with the kid stealing and breaking his stuff. He understood he was young, but what did a person do with an 8-foot tall Wookie child?

Ralph sat at the computer one night. Dave hadn't gotten a new doorknob yet for the kitchen. He heard the door pop. He looked over to see a black finger come through the hole and pull the door shut. They were pretty sure he was trying to steal the cat's food. Not sure what the etiquette was for an intrusive Wookie, Ralph pretended he didn't see it and let the awkward kid get away with it.

Sometimes, the men sensed Little Andy had been peeking in the windows. There was evidence outside the windows. 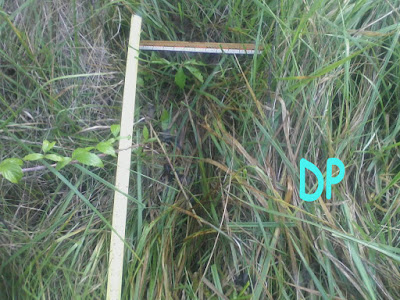 One trackway Dave found showed a 6-foot wide spread from heel to heel, around 14 inches wide at the top of the foot and 24 inches long!

One time, Dave had a short-tined rake leaning against the railing of the stairs. He found it laid out on the ground. He looked around to see flat spots on the ground where Andy had been stepping around and one where he sidestepped the rake.

Dave chuckled when he realized that when Little Andy tried to look in the window, he likely had the rake hit him and startle him. It served him right for being a pest!

Upon occasion out in the yard, poor Ralph would get a pebble thrown his way. It was like Little Andy found an easier target to taunt since he was the newer guy. As unsettling as it was, Ralph learned that the kid was just bored and lonely. If he wanted to hurt Ralph, the youth would have used bigger stones.

There was one time, however, when Ralph was trying to get the truck unstuck from the mud. He was struggling to dig out behind the tires when he got hit by one of the pebbles. He spat, "ouch!"

And Little Andy replied from the bushes with a chuckle.

Ralph's machete was gone again. He took a deep breath and looked around to find it on the ground, bent up as if it had been used to chop trees. It wasn't the first time it went missing and showed up again. He remembered what Dave told him, that they might borrow, but you should give them credit for bringing it back, so Ralph counted his small blessings and took the machete away to hide it this time.

And, Little Andy was not just interested in tools and rocks and such. He also wasn't averse to getting a couple gallons of milk set on the tailgate as the men brought groceries in. The roommates rechecked their receipt and then both of them thought the same thing at the same time - Little Andy! They rolled their eyes and studied the thicket with frustration. They were not too happy about another trek to the store.

And then, as if he wanted to make a repayment for the milk, one evening Ralph was lying in his bed when he realized he wasn't alone. A very unusual banded snake crawled across the sheets.

He leaped out of bed, called for Dave who smiled with surprise to see a snake that he had only ever seen one other time, a rather rare one.

Dave studied the open window and a finger-sized hole in the screen. They both shook their heads as if to say "that kid!"

If this was how Little Andy repaid them for the milk, the men were going to be in for some strange times ahead!

Then, one evening Dave let the dogs out and they rushed over to the corner of the garage, tails wagging. He heard a crunch of a step on some leaves and he lifted his light.

To Dave's shock, the eye shine Little Andy displayed was so brilliant, it obliterated his facial features. Dave quickly turned the light away, still blinded by the shine. It was then that he realized their eyes were wide open to gather nighttime low levels of light. He didn't want to hurt the boy, so he opted not to use the lamp again.

Dave went back to his nightly ritual role call up on his deck to the hairy ladies, who promptly returned his hello's. Their presence reassured him that all was right with his property....