Into the Rabbit Hole: Earth as a Giant Recorder? 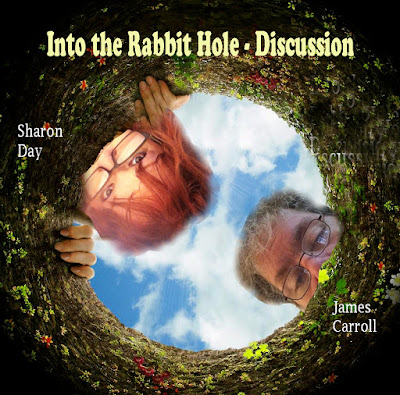 The Earth's magnetic field is believed to be generated by electric currents in the conductive material of its core, created by convection currents due to heat escaping from the core. 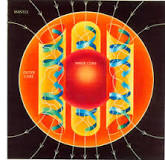 What if the earth's magnetic field, the liquid metal core and subsequent spinning action, combined with ancient man's knowledge of its properties, resulted in megalithic stone structures being erected in key spots?

What if the properties of earth make Her a giant recording device of sorts? What if all the para-encounters we have translate to every event having been recorded by nature and played back in the right points? Right conditions? Right geology?

Jim Carroll and I ponder this concept in a discussion below -

Jim: Molten Iron. To a degree, yes I do, especially in areas of high concentrations of Quartz and other piezoelectric chemicals.

Me:  Iron, yes.  I think molten, and I think lead automatically. So, you would need that continuous line from core to surface - like seismic/lava? How did the ancients know to put megalithic structures in certain areas? They dragged the damn rocks hundreds of miles for a reason ....

Jim: You would need vibrational continuity or temperature properties to allow for chemical electronic signals

Me: Give me an optimal place on earth -

Jim: Off top of my head I would say the area surrounding volcanoes. Like the long chain in Australia maybe.

Me: I am intrigued by this. As I was taking a brief nap, I was thinking about the molten core making us spin and the magnetic field and vortexes and the like..

Jim: The spinning core is what creates the magnetic gravitational effect.

Me: Yup. But, we're talking about a giant amount of iron, a spinning action, volcanic activity, seismic activity, plate shifting...atmosphere static... it seems to me that combination could make events record and under right conditions play back - haunting.

Me: Yes. you have these layers and then mantles of the earth and within lots of dynamics of seismic and volcanic activity... I have wondered why geology might affect hauntings, but considering different strata's relationship to pressure and dynamics...

Jim: Yes. You get a combination of the antenna effect produces some electrical power then that goes into the Quartz and on and on.

Me: Okay, so quartz - I have found that in every really haunted place. Quartz usually comes along with some other things like copper, gold, conductors?

Jim: Copper, gold just about any metal that can conduct electricity.

LINK:  Faraday effect, in physics, the rotation of the plane of polarization (plane of vibration) of a light beam by a magnetic field. Michael Faraday, an English scientist, first observed the effect in 1845 when studying the influence of a magnetic field on plane-polarized light waves. (Light waves vibrate in two planes at right angles to one another, and passing ordinary light through certain substances eliminates the vibration in one plane.) He discovered that the plane of vibration is rotated when the light path and the direction of the applied magnetic field are parallel. The Faraday effect occurs in many solids, liquids, and gases. The magnitude of the rotation depends upon the strength of the magnetic field, the nature of the transmitting substance, and Verdet’s constant, which is a property of the transmitting substance, its temperature, and the frequency of the light. The direction of rotation is the same as the direction of current flow in the wire of the electromagnet, and therefore if the same beam of light is reflected back and forth through the medium, its rotation is increased each time.

Jim: Sounds like a winner Capacitors are the same thing.

Me: So, it begins in the liquid iron core of the earth, spinning, causing the entire earth to spin. This creates a pull on us toward the core - gravity?

Me: We are electrical devices ourselves with metals in us including magnetite in the pineal gland. We too can be affected. Hence, earthquake premonitions?

Jim: All varieties of iron alloys in our body chemistry, and our body uses, generates and gives off electrical charges constantly - bio electricity.

Me: Then, my theory that we humans are the tools that can interpret ghosts is because when the conditions are right, we can perceive - those conditions being earth conditions or electromagnetic storms. The earth always holds all events that have occurred here in a sort of recording imprint, but we only perceive them when conditions are ripe for our electrical and chemical systems to be optimal. In a weird kind of way, we are spinning through our past and perhaps even our future causing a kind of mankind deja vu.

Jim: If you want to be picky than anything with iron components in it can be part of the overall biosphere and can in some way perceive ghosts.

Me: Or in that grand way everything here is perfectly planned from moon to earth tides, spinning and atmosphere, it also causes the transference of our energy to spirit upon death.

Jim: Well a lot don't think the electrical charge that defines us just dissipates into nothing upon our death.

Me:  Perhaps static electric exchange with the earth's own atmospheric charge? What if the "recording device of the earth" naturally works to record our content - to hold it in the environment, thus making Earth also Heaven?

Jim: I think the Earth in someway has everything that has occurred on in some type of memory that we can't fathom yet.