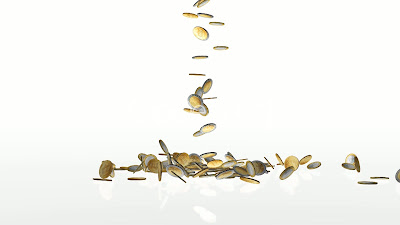 It's a fairly commonly reported paranormal phenomena. Lots of researchers have studied it like Barry Taff. And some investigators have run into cases where dozens of coins dropped from mid air and landed heads up.

Is it possible? Why does it happen?


Actually, of the poltergeist activity, coins dropping is probably one of the most commonly reported phenomena. The sound of it is familiar and coins are symbolic to most humans.

It would seem, if you were going to manipulate something, a small metallic object that makes a distinct sound, is found in most locations, and symbolic would be an ideal choice.

It's also an ideal choice of hoaxers who place them atop of doors or toss them from their pockets. So, finding genuine coin phenomena can be a tough trick. You need some good witnesses.

I know of a case where trained tribal police officers witnessed them materializing from 3-4 feet off the ground and dropping, dozens of coins, and all heads up when they landed.

The single most terrifying moment I ever had in the paranormal realm was a poltergeist activity in which the coins were controlled. My family was packing to move west from our haunted home in Virginia. My mother, sister and I sat at the breakfast room table discussing the move while my father and brother were in Arizona, finding the rental house. We heard a loud crash, went rushing across the home to the music room where a portrait on the wall fell from the wall, went 12 feet away, knocked over a folding TV dinner stand that had a jar of pennies on it and stacks of 10 pennies ready to be placed in paper rolls. The picture was unbroken upside down under the tray, 12 feet from its original position, the legs were splayed out, the jar was still standing and the 15 or so stacks of 10 pennies were still flawlessly stacked. Happened in seconds. Made no logical sense. Horrified me beyond reason. In fact, I slept in the cottage out back.

Coins are readily available and not too big. Everywhere you go, there's a coin, a jar of them by your entryway, pocket change on a dresser, fallen out of pockets onto the ground. They are readily available. But, they aren't the only thing utilized. There is also manipulation of a necklace laid out on a table, a ring, a stone, and more.

Although on investigations one might run into the coins dropping issue, the most common way that coins show themselves are not all at once from mid-air, but placed in obvious locations such as on your pillow, in your shoe, in a glass you had lying out, and the like. In these instances, they are referred to, not as poltergeist (like materializing ones), but as signs from the dead.

So, can coins be manipulated by ghostly activity? We can't really verify it is ghost-related, but could even be other dimensional or psychokinesis (moving objects activated by a living person). That is the great wonder.