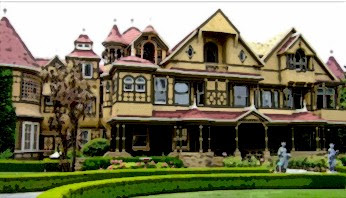 I'm getting tingles. Why? Well, they are coming up with a movie called "Winchester," a psychological thriller based on the eccentric heiress to the Winchester gun fortune, Sarah Winchester.

This got even better when I found out the woman playing the lead role is beloved and Academy Award-winning actress, Helen Mirren! 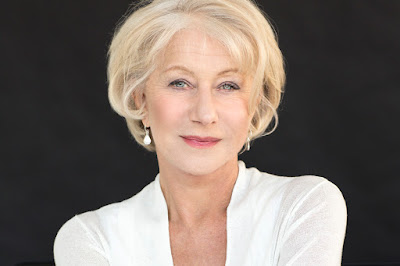 This movie is based on Sarah Winchester, who lost her child and husband and then began to wonder if her family's money made from gun manufacturing might have cursed her. This Victorian Era woman consulted a psychic to get answers and it took her on a convoluted path.

Sarah was told to move west and build a home, but never ever stop construction or she would die. For 24 hours a day, seven days a week, for 38 years, workers built useless, cobbled on, nonsensical rooms and stairways to nowhere, tore some things down, built others. And, because of Sarah's obsession with the number 13, windows had 13 panes.

The home became her own feng shui masterpiece to confuse angry spirits and lead them to dead ends, exhaust them, and make it impossible to find her.

Given the quality of the lead role actress, I suspect that this is going to be a beautiful paranormal thriller. I cannot wait!

Be assured I will be jumping on this when news is out and clips are available. Right now it is listed as in pre-production.

Here's another movie about the subject -


And enjoy this 1963 documentary about the Winchester Mystery House - creepy!

So, what else is being released?

X-Men Apocalypse With the emergence of the world's first mutant, Apocalypse, the X-Men must unite to defeat his extinction level plan.

The Ones Below A couple expecting their first child discover an an unnerving difference between themselves and the couple living in the flat below them who are also having a baby.

The Conjuring 2  Lorraine and Ed Warren travel to north London to help a single mother raising four children alone in a house plagued by malicious spirits.

Clown A loving father finds a clown suit for his son's birthday party, only to realize that it is not a suit at all.