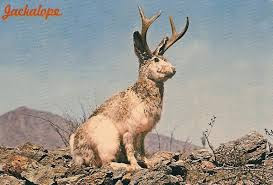 Arizona may seem barren to many outsiders, but residents know that the state is extremely diverse in weather, flora and fauna. Some of the southwestern cryptids are quite interesting, as well. And, no, there are no sightings of the fictional Jackalope, although I certainly wish they existed! 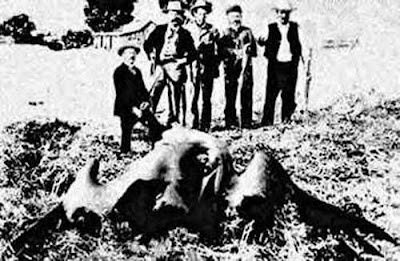 Thunderbirds cover a large range of possibilities from mistaken large birds of prey like Condors and owls and misjudged proportions of things seen on video. But, the image of the Thunderbird, or enormous bird, has been seen in Native petroglyphs and drawings from thousands of years ago and even today, upon occasion, someone reports seeing a bird of enormous size that defies anything they know of existing.

(SOURCE LINK) The story goes that two cowboys sighted an enormous flying creature in the Arizona desert in April 1890. The beast had the body of a serpent, immense wings, two clawed feet and the face of an alligator. The men got as close as their skittish horses would allow and then chased the bird on foot. It took off and landed a few times, and the cowboys opened fire with rifles and killed the monster. The enormous wingspan of the creature was said to have been 160 feet and the body was more than 92 feet long. It was smooth and featherless, more like a bat than a bird. The cowboys cut off a piece of the wing and brought it with them into Tombstone, Arizona. Or least that’s the story that was allegedly told in an April 1892 issue of the Tombstone newspaper, the "Epitaph." This was the only mention of the story and it gave all of the appearances of the tall tales that were often written in the Western newspapers of the era. What makes this story different, though, is that it has given rise to an odd, modern legend. 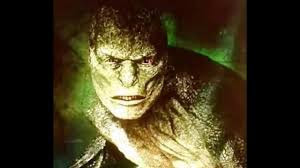 In Tucson, Arizona during a bike race, a rider saw a Lizardman standing in the desert. “We had been riding for about… I don’t know maybe nine hours, taking breaks every now and then. Then Michael says he needs to stop for a minute. We are waiting for him to finish when all of a sudden we see this long figure walking across the trail. He is maybe about 6-foot tall, very very skinny, and it had an awkward gait, like a monkey…or a man with a disease, almost robotic, kind of,” he told Cryptozoology News. 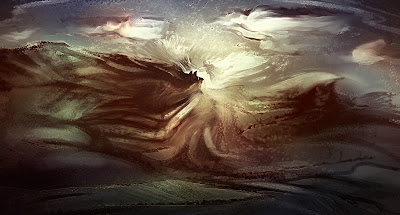 The legend of the shapeshifter is based upon witchcraft of a sort. It takes an evil practitioner to change himself into other forms, parading as animals, human, and other forms.

(SOURCE LINK)  A Flagstaff woman claimed that one night while driving across Navajo reservation land at about 60 miles an hour, one of these apparent shape-shifters started running alongside her car, tapped on her window, then darted in front of her car and disappeared off the road. Another man reported a virtually identical experience while driving near Sedona. This type of roadside encounter, which has also been reported around Winslow and Window Rock, is by far the most commonly recorded form of modern skinwalker account. Frequently, they are said to let loose a volley of screeching laughter as they torment motorists. 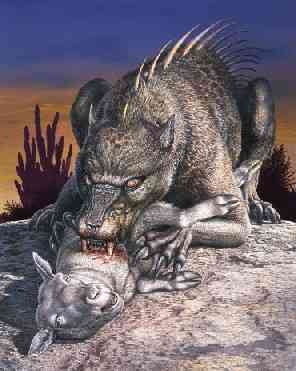 The original Chupacabras, or goat-suckers, were reported in Puerto Rico by locals who described a being with red eyes, wings, short, and angry fangs, supposedly draining their livestock of blood.

At some point, the legend came to be included in mainland USA when hairless and odd-shaped dogs showed up and locals began to photograph and even shoot the creepy creatures.

Some have reported Arizona's Bigfoots as a being referred to as the Mogollon Monster, as a good deal of the sightings have occurred on the Mogollon Rim at high elevations, but perhaps even more occur in the White Mountains on the Native Reservations in the area.

It might surprise some to know how close to the Valley of the Sun the Bigfoot venture. This is an ongoing research for me and other Arizona researchers who find their ability to adapt and seek out the best locations to be equally on par with Native People who learned to adapt to the climate and the water sources. 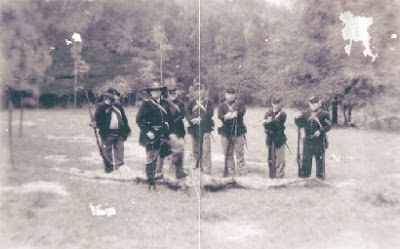 No kidding, Pterosaurs, as in - flying dinosaurs! There are reports in the Southwest and I have to wonder how such a thing would adapt to desert, as their time on earth, it was wet and jungle-like. Still, people occasionally capture photos of what they believe to be flying dinosaurs, dragons, pterosaurs, and pterodactyls.

(SOURCE LINK) I was visiting Arizona [in June of 2012] and I . . . [paddled] around a lake . . . While on the lake I noticed some very large birds in the sky. I thought they were vultures at first but these birds were landing on the sides of a shear cliff like a spider on a wall. These were creatures I had never seen before. I took photographs. . . . After investigating online, I learned that I was looking at a lost creature I was watching a ropen. These creatures were very active around dusk. They were feeding off of small fish along the shoreline. And it appeared that they lived in crevices on the cliff.

This one is pretty interesting.  A man said he found this in the desert  -