Island of the Giants 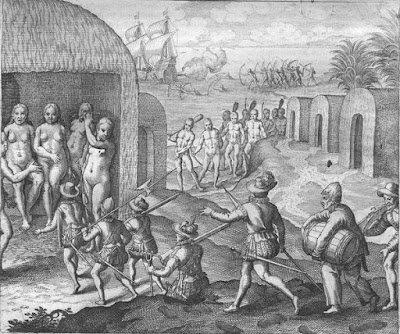 Vespucci the explorer on the island of giants

The Canary Islands, Channel Islands of California, Easter Island, and more have been described as once housing civilizations of giants, as well as along coastlines of countries around the world.

One such account was made by the explorer, Amerigo Vespucci, who charted the islands in the Caribbean and came upon an island off of Venezuela.

Yaghan, Karankawa and Baja Indians, as well as Canary Island's Gaunches people were all very tall, unusual among the other Natives of the land and all situated along the sea. In fact, the Guananches lived on the Canary Islands and yet when Spanish explorers arrived in the 1400s, they did not have boats or have a way to visit the other people on the other islands, and acted much as if they had been stranded there by a civilization that gave them great height and light hair.

The island that Vespucci explored became named as Curacao or "Isle of Giants." Vespucci said, “We landed to see if we could find fresh water, and imagining that the island was not inhabited because we saw not people. Going along the shore, we beheld very large footprints of men on the sand. And we judged if their other members were of the same size, that they must be very big men.” (Book The Suppressed History of America" by Paul Schrag and Xaviant Haze)

What happened next was like the Spanish in the 1400s in the Canary Islands. In that case, they made war with the men and wanted to mate with the women. In this case, Vespucci and his men plotted to steal some women, until the giant men arrived and stopped the plan. The men were said to be taller on their knees than Vespucci and his men standing. Now, if we assume the men were a typical height then of perhaps 5'6", then these giants were easily over 7 to 8 feet tall!

Upon leaving the island, he named it Curacao for "isle of the giants." It has been disputed that the word meant healing or heart. No one is able to verify the exact meaning of the name, but the early explorer who declared it, certainly believed it was filled with giants.

And, as was often seen by disruptive outsiders, the native people of the island were sent to work in mines and the islands were reinhabited later by other mainland groups of native people. Another culture lost to the world, like the Yaghan, Karankawa and Gaunches.

Interestingly, we see a repeated pattern of some ancient seafarers of great height and light hair coloring ending up in coastlines and islands around the world where they likely begat native people who did not fit into the usual concepts of Amerindian people. In fact, the Karankawa's otamid skull shape showed an influence closer to Polynesia or Australian aborigine than that of Asian descent Native American Tribes. So, it would seem that some seafarer of long ago (likely Denisovans) left their DNA trail down through the South Pacific and into the coastal people of the Americas.

It seems more likely that Denisovans began offspring with Homo sapiens and took them with them on sea voyages in which they deposited Homo sapiens hybrids along coastal areas and islands, leaving them seeming "stranded" in places.

Official explanations for the founder and origins of name of the island are under dispute, as we know revisionist history is an ongoing issue for national pride everywhere.

What really happened when Vespucci landed on Curacao and what kind of people did he find? This is once again lost to time, like so many other giants and accounts of giant native people. Anthropologists and archaeologists, politicians and religious leaders (the three most corrupt forces - educational, political and religious) have mutated stories until they no longer represent the origins and have obliterated cultures that once existed and are now extinct. It is very convenient for perpetuating whatever story they want to tell of how things came to be and how the world works. When people's first allegiance is an organization, they will do anything to tow the line and not disrupt the apple cart.

It will take some very objective and brave trailblazers to point and say "the emperor is naked" for research to go to the next level. Right now, collective agendas of organizations make it impossible for anyone within to take a chance and study any evidence. Just look at what I'm going through getting "Chickosaurus" identified by museums and universities - it is a total joke!

There are many coastline and island cultures like Rapa Nui, Guanches, Pericues, Karankawa, Yaghan and the Curacao tribe did not survive the intrusion from the outside world. Much information is lost and hopefully researchers can be objective when they find conflicting evidence of what they were told in school.