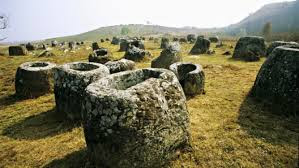 In Laos, in a remote valley, there are a number of ancient "jars" made of stone littering the ground. There are not just a few, there are thousands.


Who did these and why, is a great mystery. What they do know is that they appear to date from the 500 BC to perhaps 200 AD time period.  They cannot discern this with certainty other than the style of carving. 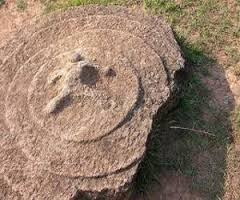 This carving is called Frogman

One theory, based on the remains of bodies found in the area and stone lids, is that these were somehow utilized as a vessel to render a body down and store it after death.

Locals report this - (source) - Locals, on the other hand, have more exciting philosophies. Some say the stone vessels were created to brew potent rice wine to celebrate the victory of a band of mythical giants over their enemies; others say the jars held whisky for a thirsty giant who lived in the mountains above Phonsavan. 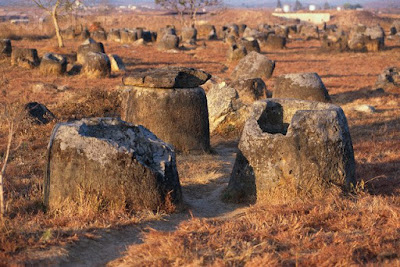 And, here we are back with ancient giant references and it would seem the megalithic builders of old were the giant culture including the Sphinx, later claimed by the locals, as was likely the case here. So, what did the giant use these vessels for? I suspect it's nothing as literal as we think. If we found an ancient pyramid, we said it was a place to put the dead, the hall of the gods (gods being those ahead-of-us giants), and they put their dead inside. That was not what the giants intended for their use.

So, what was the original use? Well, you give a primitive tribe a TV set and they are likely to use it to climb up to a tree limb to climb a tree. They use it practically and not for its intended use which escapes them.

Such is the case with the giants, their intentions still escape us.