A Psychic Premonition and a Disaster Averted! 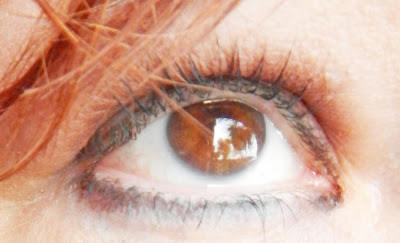 **This is a special guest post by researcher and author, David Claerr**


It is often said that Providence works in mysterious ways. Sometimes baffling and frustrating circumstances can lead to a totally different result for an undertaking in which we engage.

I recently had an unusual and somewhat remarkable episode occur a few weeks ago as I was attempting to go out on an outing with my family one fine Saturday afternoon.

We had planned a visit to the Dallas Zoo which we had not been to for a couple years or so, but where previously we had many an interesting and enjoyable time. We had planned to leave earlier in the day, but some unexpected chores, phone calls and email correspondence had taken up most of the morning. But as we set out, some time after noon, there should have been plenty of time for a typical outing.

However, recently, there had been some major reconstruction and rebuilding projects on the Dallas roadways and an unusual amount of detours. That day there were also prolonged delays due to several fender-benders and rear-end collisions. I even took some tried-and-true shortcuts and alternate routes to escape the gridlock, but we were engulfed in the worst traffic situation that I ever experienced in Dallas.

When we finally arrived at the Zoo, the trip that should have taken 30 minutes had taken about two-and-a half hours! I was trying to be very Zen in the midst of this difficulty, and we told stories and discussed some science and technology breakthroughs to entertain ourselves while crawling along in traffic. But when we went through the Zoo gate, the attendant informed us that the Zoo was closing early that day and would only be open for another hour. By then my blood pressure and frustration level was at an all-time high.

However, I did have a backup plan, which was to visit a favorite shopping spot, a grocery-clearance center that stocks gourmet and organic products at affordable prices. We liked the store because of the interesting and unusual fare there- the boys always got the cricket-and-chocolate bars that, for some reason, were always an overstocked and low-price item. So since it was relatively near to the Zoo, we headed there.

At the store, I felt restless and enervated, still overcharged with adrenaline from the harrowing drive around the city. I looked out the front window across the road to a vacant lot that had an appealing grassy meadow and shaded woodlot. On the north side of the meadow there was a new apartment complex.

It was then that I had the impression, a sort of wordless, yet strong “suggestion” of sorts, that I should go over and walk around the vacant lot. I had the definite sensation that it was somehow important that I comply with this impulse. Since I previously have had these types of psychic impressions or leadings, I felt as though I should not ignore the direction that I seemed to receive.

And I also reasoned that a walk through a fairly wild or untended patch of woods and meadowland would probably help me to calm down and work off the adrenaline and stress-hormones still surging in my bloodstream. I told my family that I was going for a walk through the woods and would be back soon.

I crossed the street and walked over to the lot , which was somewhat overgrown. There were no signs of ownership or any “No Trespassing” notices. The land appeared to be part of the public land along a creek. I then noticed that it seemed to be the site of a former homestead, quite old, and, judging from the very old, towering trees, possibly dating back at least to the mid-1800's. It was a patch of land that had been settled, but never cleared of timber or put to the plow. Plots of land like that are rare, and sometimes intriguing artifacts can be found. I first walked through the small meadow, then into the woods, where I found old bits of stone-and mortar work, rough-hewn log beams, bits of cast-iron and other remnants of a pioneer-style homestead. There were pieces of an old wagon as well.

I scouted around the old homestead and then went down to the creek, which was full to overflowing, with no good way to cross-over in sight. So I headed back through the woods to the meadow. Then I had the wordless combination of emotion and thought, that seemed as if to say: “You're not through yet, look around, you have work to do” That seemed a bit strange, but I walked around the meadow from side to side, looking for some clue or inkling as to why I was there.

Then, rather suddenly, as I tread slowly through the grass, flowers and weeds in the meadow, right in front of me was a deep hole, almost obscured by the tall grass. If I had been walking faster, I might have stepped right into it, especially if I had not been looking down at the time.

I came to an abrupt halt, and brushed away some of the grass at the edge. The hole looked to be a yard wide. Then I went over to a clump of trees and picked up a dead branch and a few stones. I went back to the well and pulled back the grass with the branch to find the edges. Then I dropped the stones down the well, and I heard the “plunk” of the stones hitting the water. Not too far down to the water, maybe fifteen feet.

I leaned over and peered down into the well, trying to adjust my eyes to the darkness. I could see some jagged pieces of limestone slab-rock jutting out from the edges of the well shaft. It seemed obvious that this was a very old, hand-dug well. With the water at the bottom, jagged edges and obscured opening, the well was a very dangerous trap for the unwary.

And here's what sent chills up my spine: at the end of the meadow was a brand-new housing project, with a number of multi-family apartment buildings. I could hear children playing boisterously outside, hollering and squealing as children often do. There was a fence along one side of the meadow, but access to the meadow was very open at the front, with only the fallen-down remnant of a barbwire fence across the long side fronting the street.

My task was then very clear: I must plug the well, right there and then. 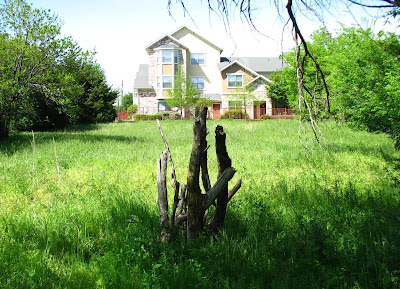 apartments with meadow and plugged well in foreground

Looking around, I saw to my relief that there were quite a few large dead branches and even deadwood trunks of trees in the ancient woodlot. So I set about dragging the branches and trunks to the well. I even pushed-over a couple standing dead trunks. Many of these pieces of raw timber were very heavy, and it took most of my strength and all my knowledge of torque and leverage to maneuver them over to the well shaft and tip them up, to slide down into the hole.

Judging from the length of the trunks I placed down, the well shaft appeared to be about twenty feet deep, so maybe it had about five feet of water at the bottom. Deep enough to drown a child.... OK, so maybe I was guided in some mysterious way to end up there, despite everything, and plug the well.

While plugging the well, I tried to force the timber into the shaft, interweaving and interlocking the trunks and branches to make them very difficult to remove. I believe that strategy succeeded, and the well was sufficiently blocked to prevent any accidents. 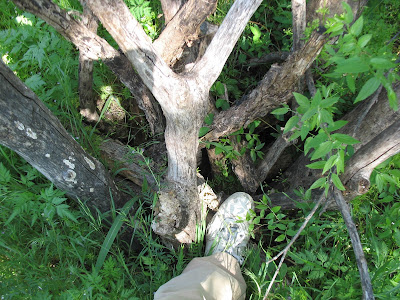 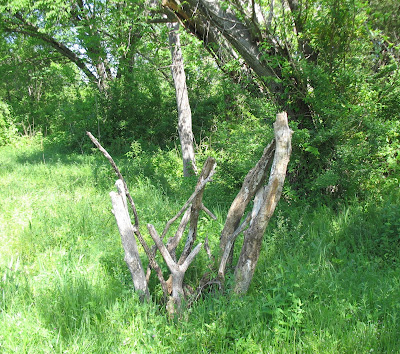 plugged well west side, tallest trunk is about 5-1/2 feet above ground

I then rejoined my family who were just then finishing up on the shopping and heading for the checkout counter. Well, for once that day, the timing of events was working out smoothly.

But one more eerie thing happened: As I was driving out of the parking lot, we saw two children running through the meadow, giggling and laughing as they frolicked about. My hair stood on end as I watched them run right past the plugged well, as they chased each other around, scarcely watching where they were running.

I have notified the city about the well, which is in a small community in the south-west of Dallas. I am at present expecting a report on a more permanent resolution of the hazard.

ABOUT THE AUTHOR:  David Claerr is an avid researcher of Bigfoot, ancient giants, anthropology and archaeology, as well as a talented artist. You can find his books on Amazon (LINK) and his personal design site with beautiful posters (LINK) in the link locations.