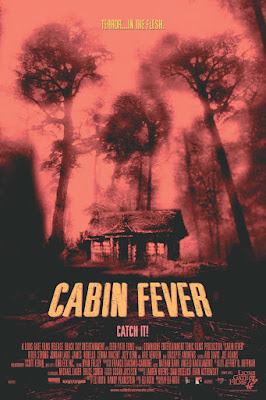 If you're a horror lover and a nature lover, the two converge into a fantastic genre - wilderness horror.

(**Description thanks to IMDB**)

Friday the 13th
A group of camp counselors is stalked and murdered by an unknown assailant while trying to reopen a summer camp which, years before, was the site of a child's drowning. GORE: Yes, but 1980s appropriate.

Sleepaway Camp
Angela Baker, a traumatized and very shy young girl, is sent to summer camp with her cousin. Shortly after her arrival, anyone with sinister or less than honorable intentions gets their comeuppance.  GORE: Yes, but 1980s appropriate.

Madman:  A murderer comes back to life and stalks a summer camp.  GORE: Yes, but 1980s appropriate.

Cabin Fever
A group of five college graduates rent a cabin in the woods and begin to fall victim to a horrifying flesh-eating virus, which attracts the unwanted attention of the homicidal locals. GORE: YES!

The Evil Dead
Five friends travel to a cabin in the woods, where they unknowingly release flesh-possessing demons. GORE: Yes, but 80s adequate.


Secret Window
A writer is accused for plagiarism by a strange man, who then starts haunting him for "justice." (Johnny Depp)  GORE: Minimal.

Exists
A group of friends who venture into the remote Texas woods for a party weekend find themselves stalked by Bigfoot.  GORE: Minimal.

Dead Snow
A ski vacation turns horrific for a group of medical students, as they find themselves confronted by an unimaginable menace: Nazi zombies.  GORE: YES!

Day of the Animals
A battle for survival as hikers encounter a chemically imbalanced forest. Leslie Nielsen.  GORE: Nope.

The Final Terror
A group of forest rangers go camping in the woods, and trespass into an area where a backwoods mama likes to kill people who come onto her turf. Rachel Ward. Adrian Zmed.  Daryl Hannah. GORE: Minimal.

Just Before Dawn
Five campers arrive in the mountains to examine some property they have bought, but are warned by the forest ranger Roy McLean that a huge machete-wielding maniac has been terrorising the area. Ignoring the warnings, they set up camp, and start disappearing one by one. If that sounds too run-of-the-mill, there's a genuinely shocking plot twist half-way through... GORE: Yes, but 1980s appropriate.

Nightmare at Bitter Creek
Four vacationing women back-packing in the Sierra mountains unwittingly stumble upon a hideout, and are terrorized by a ruthless group of Neo-Nazis in a deadly game of cat and mouse. With only an alcoholic ex-cowboy as a guide, the women must struggle for their lives when it becomes apparent that their trackers have no intention of letting them leave the mountain alive. Lindsey Wagner. GORE: Nope.

Wolf Creek
Ben, Liz and Kristy; backpackers stranded in the Australian outback, are befriended by a local who is a sadistic psychopath that will plunge them into a hellish nightmare of insufferable torture. GORE: YES!

The Blair Witch Project
Three film students vanish after traveling into a Maryland forest to film a documentary on the local Blair Witch legend, leaving only their footage behind. GORE:  Nope.

The Edge
An intellectual billionaire and two lesser men struggle to band together and survive after getting stranded in the Alaskan wilderness with a blood-thirsty Kodiak Bear hunting them down. Anthony Hopkins. Alec Baldwin.  GORE:  Minimal.

Hills Have Eyes
On the way to California, a family has the misfortune to have their car break down in an area closed to the public, and inhabited by violent savages ready to attack. GORE:  Yes, but 1980s appropriate.

Dead Calm
A mass murderer kidnaps and seduces a young woman after leaving her husband to die on the vessel whose crew he has just slaughtered. GORE: Nope. Nicole Kidman.

Wind Chill
Two college students share a ride home for the holidays, but when they break down on a deserted stretch of road, they are preyed upon by the ghosts of people who have died there.  GORE:  Nope.