"The Forest" in Theaters Today! 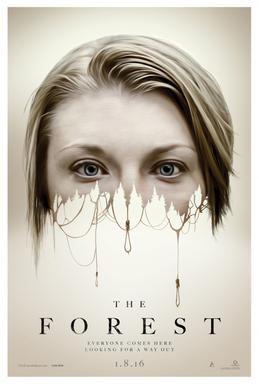 When her twin sister disappears in Japan, a young American named Sara (Natalie Dormer) becomes determined to find out what happened to her. Sara's investigation leads her to the legendary Aokigahara Forest, located at the base of Mount Fuji. Accompanied by expatriate Aiden, she enters the mysteriouswilderness after being warned to "stay on the path." Her investigation plunges her into a dark world where the angry and tormented souls of the dead prey on those who dare to explore the forest.


Suicide Forest is actually a forest on the base of Mt. Fuji in Japan, called Aokigahara Forest. Every year, hundreds of people go into this tricky dark forest where it's easy to get lost and turned around, and they do not come back out. They go there to end their lives. The worker's for the park service who must retrieve the bodies play a game and whoever loses the game, has to sit with the body all night long. It is believed they will haunt the forest if they are left alone before their burial. "Destination Truth" did a fairly chilling episode on the forest and it has been portrayed in some interesting movies and terrifying documentaries.