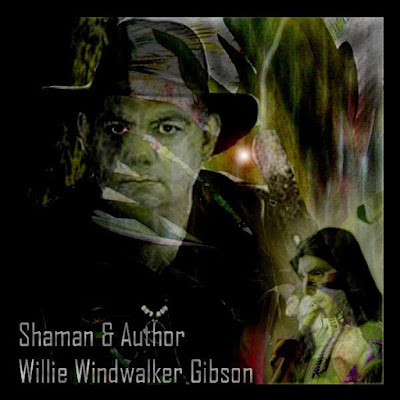 (*This is a special guest by shaman, Willie "Windwalker" Gibson. I am hoping to share more and during coming months and year of people who have taken paths for humanity.)

I was assigned to an area that had a Native American burial site on it. I used to park my patrol car at the edge of the burial grounds every night and watch for speeders, and wandering around the grounds after hours.

One night about 2 a.m. in the morning, there was a misty rain coming down. I was looking out at the burial site and I could see a person walking straight for my patrol car.

I quickly turned on my headlights and my side spotlight on the person walking. I saw it was an Indian man, he looked to be in his 60s.

The man kept on walking.

I put my hand on my side arm and I warned, "Stop!"

He smiled at me and said, "I belong here."

I told him to show me his ID. He just smiled at me and said, "I am Singing Fox, I watch over the land."
I slowly moved forward to check out the man closer.

He smiled and asked, "You're Indian?"

The man asked me what my Indian name was. I told him I had none. He looked me, stern in the eyes, and said, "From this day forward your name is Windwalker; he who walks with the spirits."

He then faded away.

I stood there just looking. I got back into my patrol car. I didn't make a report on what had happened to the police station. Instead, I decided to keep quiet.

The next night, around the same time, I was in my car watching the burial site again. The Indian man, Singing Fox, reappeared.

I got out of my car and asked him what did he wanted with me. It was at this time I was told by Singing Fox I would become a Shaman, that I would be helping people and the world.

Everytime I was on duty, Singing Fox would show up, and we would sit all night long under a tree near the burial grounds. He would tell me the ways of the Shaman, and what shamans where chosen to do.

Shamans are go-betweens. They work many realms, earthly and spiritual as well as cosmic.

I told Singing Fox I wanted to stay a cop. He was very stern that I would become a Shaman.

The training went on for six months. Then, one day I got orders to go to a different area. When I told Singing Fox this, he told me I would have other teachers come into my path, teachers that would teach me different things, that I would need to know.

Singing Fox and I said our goodbyes and I left the burial site for good.

Eight Years passed. I left the peace officer profession and became a security agent for a big hotel.

One night I went into the hotel bar and I began telling the lady bartender about my Shaman's training and she suggested that I meet a woman she had been seeing for spiritual counseling.

So, the next night I went with the lady bartender. When we got to the house, I could feel the power coming from within.

We knocked and a woman opened the door. She had solid white hair, deep blue eyes and a very thin build. She told me her name was Rose. She told us to come in.

I walked into her living room and it had lots of Indian art in it. I looked closer and I could see Rose was Native. We stood there in the room and Rose said to me, "don't move."

She left the room came back, and gave me a watch to hold. She told me to hold it in my left palm. I did.

I felt a vibration start and I could see a vision in my head of a man with white hair, standing on a beach. He looked sad.

I told Rose what I saw. She smiled, took the watch and left the room again.

When she returned, she had a picture. She handed it to me and said, "You see this man before?"

I looked at the picture and it was the man in the vision. I told Rose this and she said, it was a picture of a man she once knew. He had gave her that watch 2 weeks before he died.

She smiled and said to me, "You're a shaman!"

Rose took me under her wing for several months, teaching me more Shaman knowledge.

After she had taught me all she could, she said to me, "Now you're ready, go do what you were chosen to do."

Ever since then I have been out there doing what I was chosen to do; help people when ever I can, to fight evil with Christ Light.

You can not read a book and say you are a Shaman. You have to be taught and mentored by a master Shaman. This master will know if you are a chosen Shaman or not.

The chosen have been chosen for a reason. The Shaman, when asked for help, will do everything within there power to help. It is their mission in the world.

How to find Willie and his work

SHARON'S NOTE:  I (blog author) must say that as a psychic, I don't ever get other psychics who can read me. In the case of Willie, he has been able to connect to the second in a way that gives me chills. This man has a higher caller and I endorse his skills. That is a very rare happening. To impress me, one has to have a hit record over time that shocks me. In his case, most definitely. I do believe he was meant to do what he does. That is a high endorsement from someone who is highly skeptical about reported skills. His are most definitely genuine.